Insecure Security: Emergency Water Supply and Minimum Standards in Countries with a High Supply Reliability
Next Article in Special Issue

Quantifying the Effects of Climate and Vegetation on Soil Moisture in an Arid Area, China
Previous Article in Journal

Soil water is the limitation factors in the semiarid region for vegetation growth. With the large scale “Grain for Green” implementation on the Loess Plateau of China, an amount of sloping cropland was converted to forestland, shrubland, and grassland. The spatial and temporal distribution of soil water was changed. However, the effect of revegetation on soil water movement is still unclear. In this study, we analyze the stable isotopes changes in precipitation and soil water in sloping cropland, forestland, shrubland, and grassland to trace the movement of moisture in soil. The results showed that δ18O in shallow layers (<20 cm depth) of sloping cropland, forestland, shrubland, and grassland were −3.54‰, −2.68‰, −4.00‰, and −3.16‰, respectively. The δ18O in these layers were higher than that in the lower layers, indicating that evaporation was mainly from the shallow layers. The δ18O for the soil water in the unsaturated zone in the grassland, shrubland, and forestland of the temporal variability decreases with depth and approaches a minimum value at 160 cm, 180 cm, and 200 cm, respectively, suggesting that the soil water is relatively stable many months or even longer. Precipitation was infiltrated with piston and preferential modes, and infiltration demonstrated obvious mixing. Present study demonstrated the δ18O was more sensitive than the soil water content for tracing the maximum infiltration depth of event water and recharge mechanisms. Consequently, we suggested that the land user management such as type, plant density should be considered in the revegetation. View Full-Text
Keywords: the Loess Plateau of China; oxygen isotope; precipitation; soil water; unsaturated zone the Loess Plateau of China; oxygen isotope; precipitation; soil water; unsaturated zone
►▼ Show Figures 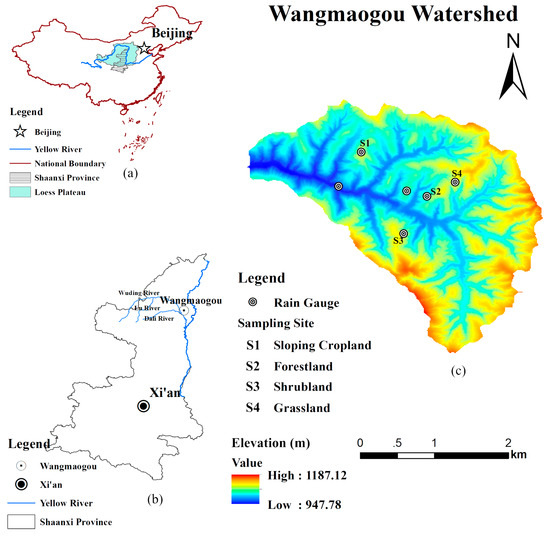