The multifractal properties of six acknowledged agro-meteorological parameters, such as reference evapotranspiration (ET0), wind speed (U), incoming solar radiation (SR), air temperature (T), air pressure (P), and relative air humidity (RH) of five stations in California, USA were examined. The investigation of multifractality of datasets from stations with differing terrain conditions using the Multifractal Detrended Fluctuation Analysis (MFDFA) showed the existence of a long-term persistence and multifractality irrespective of the location. The scaling exponents of SR and T time series are found to be higher for stations with higher altitudes. Subsequently, this study proposed using the novel multifractal cross correlation (MFCCA) method to examine the multiscale-multifractal correlations properties between ET0 and other investigated variables. The MFCCA could successfully capture the scale dependent association of different variables and the dynamics in the nature of their associations from weekly to inter-annual time scales. The multifractal exponents of P and U are consistently lower than the exponents of ET0, irrespective of station location. This study found that joint scaling exponent was nearly the average of scaling exponents of individual series in different pairs of variables. Additionally, the α-values of joint multifractal spectrum were lower than the α values of both of the individual spectra, validating two universal properties in the MFCCA studies for agro-meteorological time series. The temporal evolution of cross-correlation determined by the MFCCA successfully captured the dynamics in the nature of associations in the P-ET0 link. View Full-Text
Keywords: reference evapotranspiration; agro-meteorological; multifractal; scaling; cross-correlations; persistence reference evapotranspiration; agro-meteorological; multifractal; scaling; cross-correlations; persistence
►▼ Show Figures 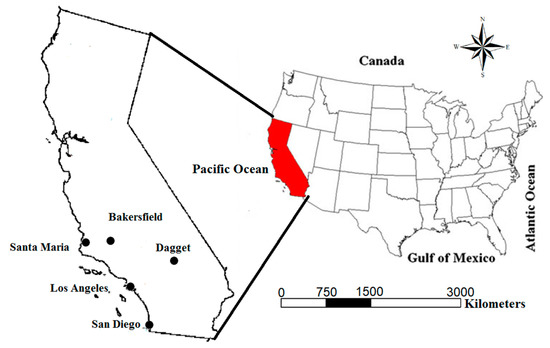