What Is the Giant Wall Gecko Having for Dinner? Conservation Genetics for Guiding Reserve Management in Cabo Verde
Previous Article in Journal

De-extinction projects for species such as the woolly mammoth and passenger pigeon have greatly stimulated public and scientific interest, producing a large body of literature and much debate. To date, there has been little consistency in descriptions of de-extinction technologies and purposes. In 2016, a special committee of the International Union for the Conservation of Nature (IUCN) published a set of guidelines for de-extinction practice, establishing the first detailed description of de-extinction; yet incoherencies in published literature persist. There are even several problems with the IUCN definition. Here I present a comprehensive definition of de-extinction practice and rationale that expounds and reconciles the biological and ecological inconsistencies in the IUCN definition. This new definition brings together the practices of reintroduction and ecological replacement with de-extinction efforts that employ breeding strategies to recover unique extinct phenotypes into a single “de-extinction” discipline. An accurate understanding of de-extinction and biotechnology segregates the restoration of certain species into a new classification of endangerment, removing them from the purview of de-extinction and into the arena of species’ recovery. I term these species as “evolutionarily torpid species”; a term to apply to species falsely considered extinct, which in fact persist in the form of cryopreserved tissues and cultured cells. For the first time in published literature, all currently active de-extinction breeding programs are reviewed and their progress presented. Lastly, I review and scrutinize various topics pertaining to de-extinction in light of the growing body of peer-reviewed literature published since de-extinction breeding programs gained public attention in 2013. View Full-Text
Keywords: de-extinction; precise hybridization; evolutionarily torpid species; proxy; passenger pigeon; woolly mammoth; heath hen; revive & restore de-extinction; precise hybridization; evolutionarily torpid species; proxy; passenger pigeon; woolly mammoth; heath hen; revive & restore
►▼ Show Figures 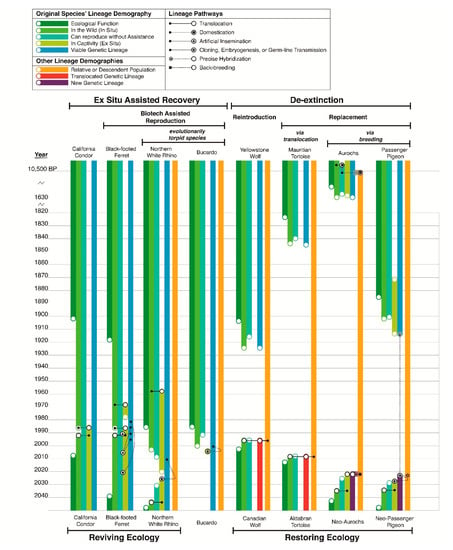