WebCircRNA: Classifying the Circular RNA Potential of Coding and Noncoding RNA
Next Article in Special Issue

Molecular Evidence for Two Domestication Events in the Pea Crop

Pea, one of the founder crops from the Near East, has two wild species: Pisum sativum subsp. elatius, with a wide distribution centered in the Mediterranean, and P. fulvum, which is restricted to Syria, Lebanon, Israel, Palestine and Jordan. Using genome wide analysis of 11,343 polymorphic single nucleotide polymorphisms (SNPs) on a set of wild P. elatius (134) and P. fulvum (20) and 74 domesticated accessions (64 P. sativum landraces and 10 P. abyssinicum), we demonstrated that domesticated P. sativum and the Ethiopian pea (P. abyssinicum) were derived from different P. elatius genepools. Therefore, pea has at least two domestication events. The analysis does not support a hybrid origin of P. abyssinicum, which was likely introduced into Ethiopia and Yemen followed by eco-geographic adaptation. Both P. sativum and P. abyssinicum share traits that are typical of domestication, such as non-dormant seeds. Non-dormant seeds were also found in several wild P. elatius accessions which could be the result of crop to wild introgression or natural variation that may have been present during pea domestication. A sub-group of P. elatius overlaps with P. sativum landraces. This may be a consequence of bidirectional gene-flow or may suggest that this group of P. elatius is the closest extant wild relative of P. sativum. View Full-Text
Keywords: domestication; Ethiopian pea; pea; Pisum sativum; seed dormancy domestication; Ethiopian pea; pea; Pisum sativum; seed dormancy
►▼ Show Figures 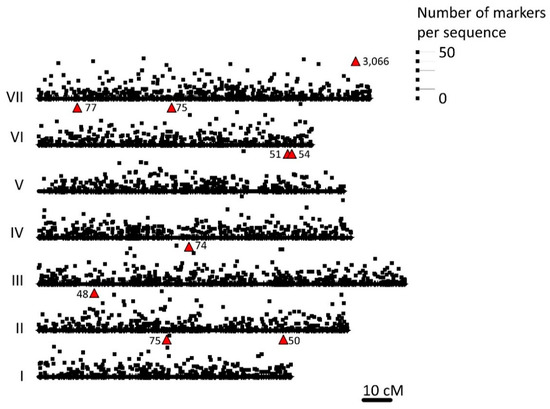