Role of the JAK/STAT Pathway in Cervical Cancer: Its Relationship with HPV E6/E7 Oncoproteins
Next Article in Special Issue

Pregnane X receptor (PXR, NR1I2) is a member of the ligand-activated nuclear receptor superfamily. This receptor is promiscuous in its activation profile and is responsive to a broad array of both endobiotic and xenobiotic ligands. PXR is involved in pivotal cellular detoxification processes to include the regulation of genes that encode key drug-metabolizing cytochrome-P450 enzymes, oxidative stress response, as well as enzymes that drive steroid and bile acid metabolism. While PXR clearly has important regulatory roles in the liver and gastrointestinal tract, this nuclear receptor also has biological functions in breast tissue. In this review, we highlight current knowledge of PXR’s role in mammary tumor carcinogenesis. The elevated level of PXR expression in cancerous breast tissue suggests a likely interface between aberrant cell division and xeno-protection in cancer cells. Moreover, PXR itself exerts positive effect on the cell cycle, thereby predisposing tumor cells to unchecked proliferation. Activation of PXR also plays a key role in regulating apoptosis, as well as in acquired resistance to chemotherapeutic agents. The repressive role of PXR in regulating inflammatory mediators along with the existence of genetic polymorphisms within the sequence of the PXR gene may predispose individuals to developing breast cancer. Further investigations into the role that PXR plays in driving tumorigenesis are needed. View Full-Text
Keywords: nuclear receptor; pregnane X receptor; xenobiotics; tumorigenesis; breast cancer nuclear receptor; pregnane X receptor; xenobiotics; tumorigenesis; breast cancer
►▼ Show Figures 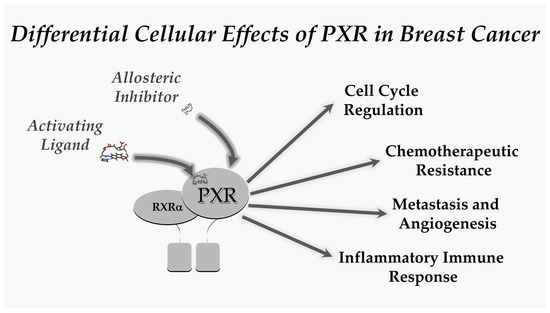