The Influence of (5′R)- and (5′S)-5′,8-Cyclo-2′-Deoxyadenosine on UDG and hAPE1 Activity. Tandem Lesions are the Base Excision Repair System’s Nightmare
Next Article in Special Issue

Ectodermal appendages, such as hair follicles, teeth, salivary and mammary glands, are highly specialized structures that develop through continuous molecular crosstalk between epithelium and mesenchyme. These organs exhibit morphological and regulatory similarities during the earliest stages of development [1,2]. Molecular fine-tuning at more advanced developmental stages defines organ specificity and function. Variations in the expression of regulatory molecules can lead to conversion of a specific developing organ into another having completely different functions [3]. Classical tissue recombination experiments have highlighted the importance of these regulatory signals during ectodermal organ development and also revealed that the mesenchyme contains the morphogenetic potential [4,5]. Therefore, epithelial cells can be redirected and adopt alternative fates under the influences of tissue-specific mesenchymal signals.
All ectodermal organs contain stem cell populations that can generate various cell types, thus ensuring their homeostasis and regeneration throughout life [1,6]. Stem cell plasticity is enhanced during tissue regeneration, a process that requires, instantaneously, a large number of cells for the replacement of damaged or lost cells [6,7]. Various epithelial stem cell populations have been identified recently by genetic lineage tracing experiments in organs, such as hairs, mammary glands and teeth [6,8,9]. In the continuously erupting rodent incisors, multipotent dental epithelial stem cells (DESCs) that express stem cell markers such as Gli1 [8], Bmi1 [10] and Sox2 [9] are localized at their posterior end, the so-called cervical loop epithelium. Although these stem cells can generate all dental epithelial lineages, their capacity to form tissues of non-dental origin has not been assessed yet.
In vivo cell transplantation assays have been commonly used to identify epithelial stem cells and assess their plasticity during tissue regeneration [6,11,12]. Mammary gland regeneration is one of the most commonly used reconstitution assays, where mammary gland-derived epithelial fragments or disaggregated epithelial cells are transplanted into an epithelium-free mammary mesenchyme (also called fat pad) for de novo generation of functional ductal epithelial structures [11,13]. Expansion of the bilayered mammary epithelium occurs under the influence of hormones and is sustained by adult epithelial stem cells [14,15]. Classic chimeric recombination models demonstrated that the epithelial component is highly malleable, and that cell fate and tissue function are strongly influenced by the stromal component of the mammary gland. These studies using the mammary reconstitution assay indeed have shown that also neuronal, testicular, bone marrow and cancer cells mixed together with MECs can be reprogrammed and integrate into the epithelial ductal outgrowths [16,17,18]. However, these non-mammary epithelial cells never showed the ability to grow in mammary stroma without the support of MECs [12] and they were not able to generate ducts [16,17].
Here we aimed to demonstrate for the first time the capacity of DESCs to give rise to non-dental cell lineages that contribute to the formation of epithelial structures in organs other than teeth.

DESCs were isolated from the cervical loop of incisors of GFP-expressing Slc:dddy mice at postnatal day 3. These cells were cloned twice and cultured in collagen-coated plates in Dulbecco’s Modified Eagle Medium (DMEM)/F12 containing penicillin/streptomycin (1%), B27 (1X), epidermal growth factor (EGF) (200 ng/mL) and basic fibroblast growth factor (bFGF) (25 ng/mL). Mouse mammary epithelial cells (MECs) were isolated as described previously [19]. Briefly, mammary glands from eight week-old female mice were manually minced and enzymatically digested. After purification steps to get rid of the non-epithelial mammary tissues, epithelial organoids were obtained. A treatment with trypsin and DNase followed by filtration through a 40 μm cell strainer was performed in order to get single epithelial cells. The resulting MECs were plated in collagen-coated plates and infected with a lentivirus expressing DsRed prior to the in vivo mammary transplantation assay.

All mice were maintained and handled according to the Swiss Animal Welfare Law (Animal License: 11/2014). Twenty-one day-old Rag1-/- (B6;129S7- Rag1<tm1Mom>/J(#002216); MGI: J1934) immunocompromised mice were used as hosts for the mammary transplantation experiments. Briefly, mammary fat pad containing endogenous epithelium (from the lymph node to the nipple area) was removed from the fat pads of the fourth mammary glands. Ten microlitres of cells (see Table 1 for cell amounts) in matrigel/phosphate buffered saline (PBS) (1:8) were injected in the remaining fat6 pad of mammary glands using a Hamilton syringe (with a 22-gauze needle). A total of 22 fat pads were inoculated. The mammary fat pads from virgin (never mated) host mice were dissected eight weeks after cell injection. At this time point, some of the mice were mated and plug checked in order to analyse them at pregnancy day 16 (P16). Whole mount pictures of the freshly dissected mammary glands were taken using a stereoscope. Afterwards, mammary glands were fixed for 30 min in paraformaldehyde 4% at room temperature and processed for paraffin embedding.

We used the mammary gland reconstitution in vivo assay to assess the plasticity and ability of DESCs to generate mammary epithelial cells after transplantation into the fat pads (Figure 1A). DESCs expressing both epithelial and stem cell markers (Figure 1B, Figure S1) were obtained from the cervical loop of GFP incisors via a cloning assay. These DESCs were mixed with primary mammary epithelial cells (MECs) and injected into epithelium-free mammary fat pads of immunocompromised RAG1 (recombination activating gene 1) -/- mice (Figure 1A). The fate of cells derived from these two cell populations was tracked by green fluorescent protein (GFP) expression for DESCs and lentivirus-induced DsRed (Discosoma sp. red) fluorescent protein expression for MECs (Figure 1A). Injection of MECs alone was used as positive control (Figure S2).
DESCs and MECs cells formed chimeric ductal structures composed by GFP-positive DESCs-derived cells and DsRed-positive MECs in mammary glands analysed eight weeks post-transplantation (Figure 1C–I) and pregnancy day 16.5 (Figure 1J,K).
To analyse in detail the distribution of transplanted DESCs within the developing chimeric ducts we first performed double immunofluorescence staining against GFP and keratin14 (Krt14), which is a marker for basal/myoepithelial cells in adult mammary gland [21] (Figure 2). GFP-positive cells were observed in both Krt14-positive myoepithelial and Krt14-negative luminal compartments (Figure 2C–K). DESCs-derived cells accounted for approximately 20% of the cells composing the epithelial compartment of the chimeric mammary ducts (Figure S3). Mammary luminal epithelium is complex and composed by various cell populations [22,23], grouped in two main subsets named ductal and alveolar cells. Ductal cells are lining the epithelial ducts and among them, oestrogen receptor alpha (ERα) expressing cells are responsible for the activation of the paracrine signalling that is essential for mammary epithelium elongation upon exposure to pubertal oestrogens [24]. On the other hand, alveolar cells constitute the milk-secreting alveolar units that arise during late pregnancy. Double immunofluorescence against GFP and ERα in the chimeric epithelium revealed that GFP-positive cells can give rise to both ERα-positive and ERα-negative luminal cells (Figure 2L–N). The ability of GFP-positive cells to give rise to luminal cells was further confirmed via double immunofluorescent staining against GFP and keratin 8 (Figure S4). Importantly, immunofluorescent and immunohistochemical analysis showed that GFP-positive DESCs could adopt a fully functional phenotype of β-casein-positive, milk-producing alveolar cells (Figure 2O–R, Figure S5).
We then wished to know whether DESCs possess the plasticity and reprogramming competence to regenerate ducts in absence of mammary epithelium. For this purpose, we performed the previously described mammary reconstitution assays in absence of MECs by injecting only DESCs into the fat pads (Figure 3A). Whole-mount fluorescence analysis revealed the formation of GFP-expressing small branched epithelial structures (Figure 3B, Figure S6). Immunofluorescence against GFP and detailed histological analysis showed that these outgrowths were exclusively composed by DESC-derived cells (Figure 3E) and surrounded by a dense fibrotic tissue (Figure 3C,D). The morphology of the cells composing the rudimentary ducts was variable, from flattened to columnar shapes (Figure 3D). To further analyse the composition of these ducts we assessed the distribution of Krt14 and ER-α. Immunofluorescent staining showed that these structures were composed by both Krt8-expressing luminal and Krt14-positive myoepithelial cells (Figure 3F,G, Figure S4). ER-α expressing cells were also detected in the epithelium of these ducts, although ER-α expression was significantly lower than that observed in the fully developed chimeric mammary epithelial outgrowths (Figure 3H). Similarly, we detected expression of βcasein within some DESC-derived ducts (Figure 3I), indicating that these cells have the capacity to initiate differentiation towards milk-producing, alveolar cells. At the same time, these cells show expression of amelogenin, a typical marker of ameloblast differentiation [25] (Figure 3J), thus indicating at least a partial memory of the tissue of origin. In some cases, the generated structures were dilated and adopted a cystic appearance (Figure 3K–M), characterized by flattened epithelial cells forming a monolayer (Figure 3L,M). These cystic structures were observed in more than 80% of the glands in which only DESCs were engrafted.
In association with DESCs transplantation we frequently observed the formation of dense fibrotic tissue. Fibrosis was detected in a subset of mammary fat pads transplanted with mixed MECs/DESCs, and in all fat pads inoculated with DESCs alone (Figure 4A,B). The non-epithelial tissue surrounding the ducts was composed by a very dense network of collagen fibres, as shown by Masson’s trichrome staining (Figure 4C,D). To assess the origin of the fibrotic tissue, we performed double immunofluorescent stainings for GFP and smooth muscle actin (α-SMA), a marker for fibrotic-tissue associated myofibroblasts (α-SMA). Double GFP- and α-SMA- positive DESCs-derived cells were detected in non-epithelial components of the mammary gland, i.e., in the fibrotic tissue surrounding the ducts (and cysts (Figure 4E,F). The tissue surrounding ducts and cysts showed presence of fibronectin (Figure 4G), a fundamental component of mammary stroma as well as fibrotic tissue. Double GFP- and fibronectin-positive DESC-derived cells could be observed in the fibrotic tissue surrounding the ducts (Figure 4H). These results suggest that DESCs can adopt a mesenchymal fate and generate myofibroblasts.

This research was supported exclusively by funds from the University of Zurich.

Lucia Jimenez-Rojo (current e-mail address: [email protected]) is now working at the Department of Cell Biology and Histology, Faculty of Medicine and Nursing, University of the Basque Country, Spain. We thank Maria Alexiou for assistance with cell cultures and Joerg Huelsken (EPFL Lausanne) for providing the DsRed lentiviral vector. We are grateful to Professor Cathrin Brisken (EPFL Lausanne) for giving us access to her laboratory facilities for some of the experiments described in this paper. We thank Madeline Fellner (Institute of Oral Biology, University of Zurich) for her assistance in the realization of the Masson’s Trichrome Staining. Part of imaging was performed with equipment maintained by the Center for Microscopy and Image Analysis, University of Zurich.

The authors state that there are no conflicts of interest linked to the present manuscript. 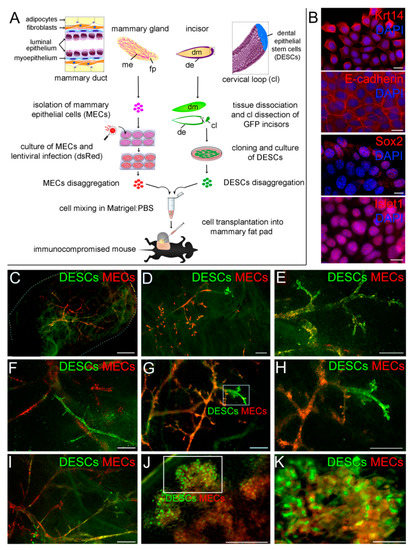 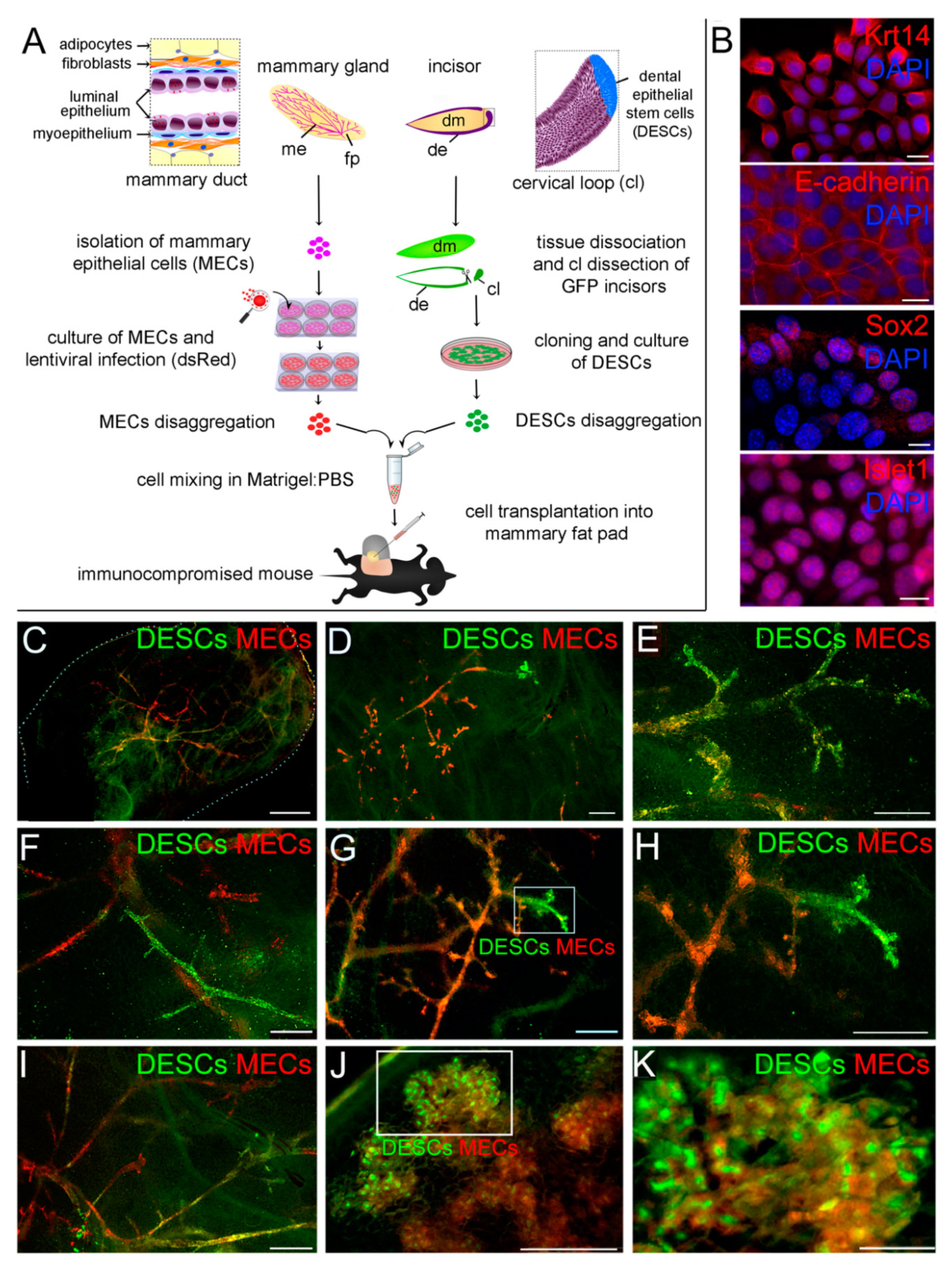 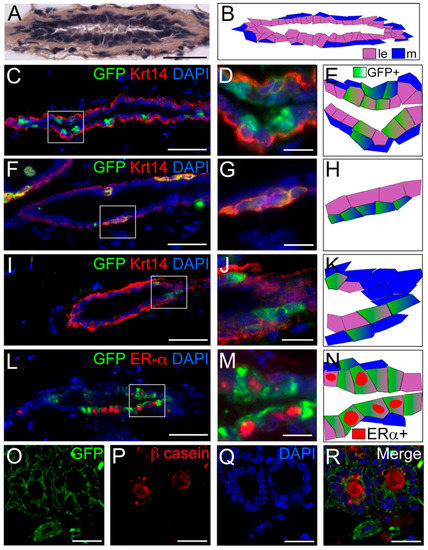 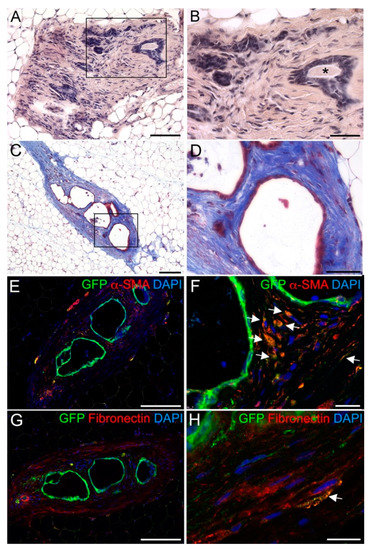 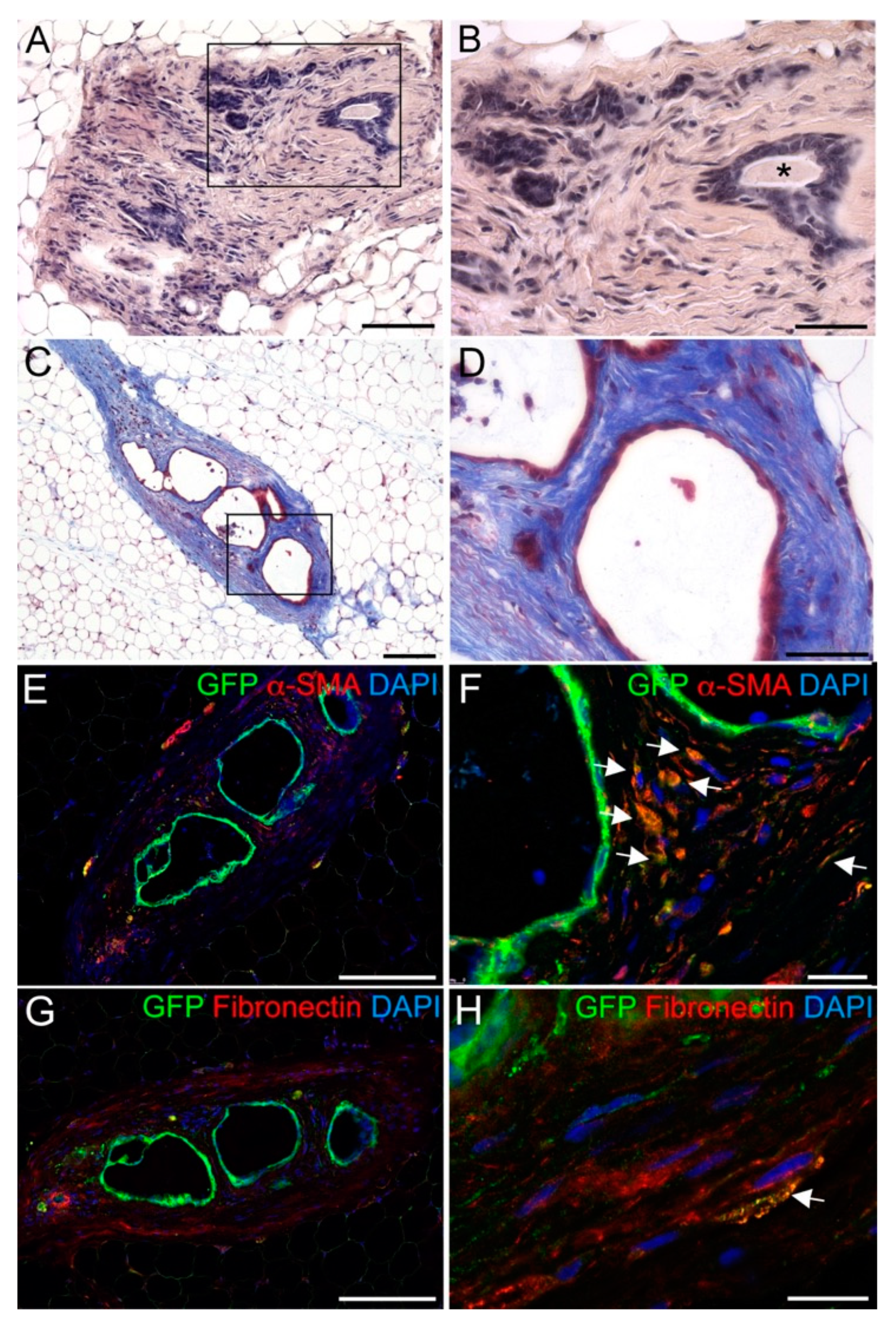 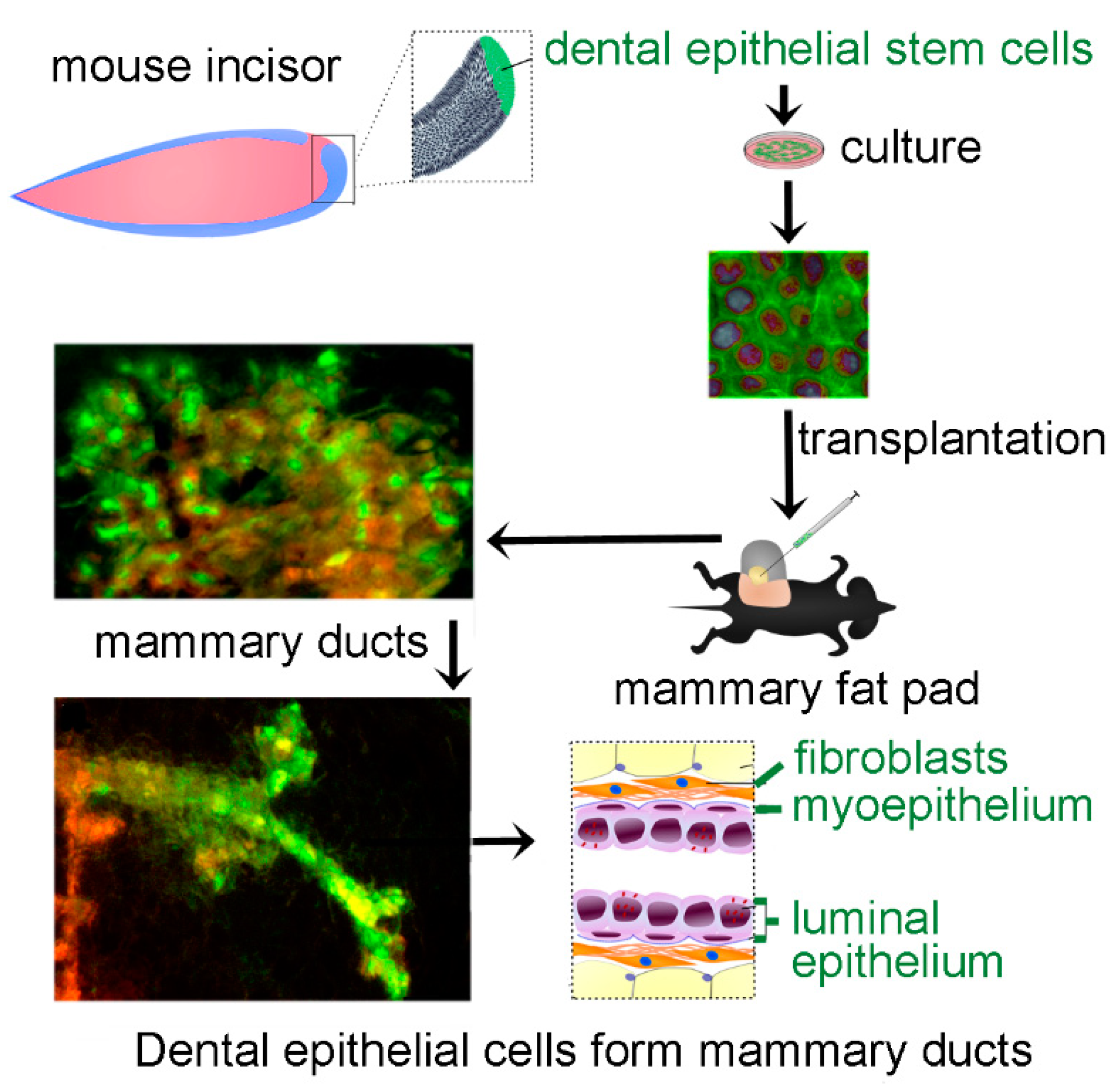