Germination and Emergence Responses of Alfalfa, Triticale and Quinoa Irrigated with Brackish Groundwater and Desalination Concentrate

Increasing human population has raised the demand for food and forage production for a secure future. Current agriculture is challenged by increasing salinity and decreasing vegetation, especially in the arid and semi-arid regions of the world. Western United States, especially, New Mexico is confronting continued drought, sodic soils, and degrading rangelands. Groundwater is increasingly used to supplement surface water for irrigation, despite being brackish, with an EC greater than 3 dSm−1. One way to supplement irrigation water supply is to desalinize brackish groundwater using a reverse osmosis (RO) process and utilize the RO concentrate to irrigate food and forage crops. The objective of this study were to determine the germination and emergence of three species, alfalfa (Medicago sativa-VNS (variety not stated)), triticale (×Triticosecale (VNS)), and quinoa (Chenopodium californicum-hand selected from native stand in S. California), when irrigated with brackish and RO concentrate waters. A germination experiment was conducted with alfalfa, triticale, and quinoa for 20 days in growth chambers set at their optimum germination temperatures of 29/18 °C, 17/7 °C, and 17/7.2 °C day/night, respectively, with a 12-hour photoperiod. An emergence experiment was conducted with the same species under controlled conditions in a greenhouse. In both the experiments, seeds were irrigated with four irrigation water salinity treatments (EC 0.7 dSm−1 (tap water as control)), 4.0 dSm−1 brackish groundwater (BGW), 8.0 dSm−1 reverse osmosis concentrate (RO), and 10.0 dSm−1 (BGW + NaCl) irrigation. Germination %, and emergence %, mean germination and emergence time, germination and emergence index, Timson’s index and Timson’s modified index were calculated. Results showed triticale had the highest germination % (80.5% as soils main effect and 87.84 % as species main effect irrespective of salinity) and emergence % (91.25% with control and BGW, 87.19% with RO) while quinoa was the most sensitive to salinity. Sand soil was favorable promoting higher germination up to 8 dSm−1 and clay soil promoted good emergence in alfalfa and triticale. The mean germination and emergence time was the shortest for triticale followed by alfalfa and longest for quinoa. This clearly demonstrates triticale as a promising salt tolerant forage species that can be cultivated in dry and degraded rangelands. View Full-Text
Keywords: Medicago sativa; ×Triticosecale; Chenopodium californicum; brackish groundwater (BWG); reverse osmosis (RO); RO concentrate; germination; emergence; irrigation Medicago sativa; ×Triticosecale; Chenopodium californicum; brackish groundwater (BWG); reverse osmosis (RO); RO concentrate; germination; emergence; irrigation
►▼ Show Figures 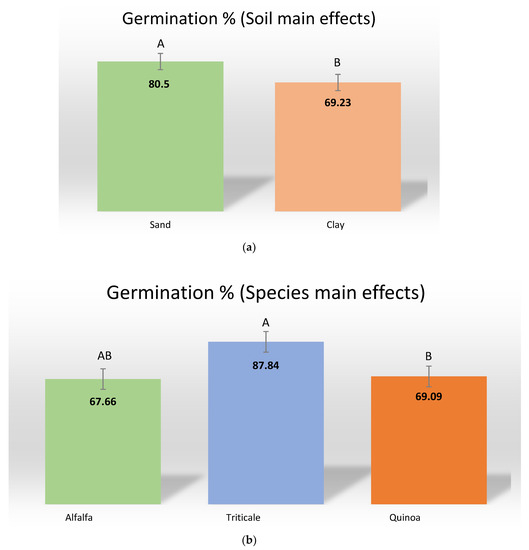