Ultra-High-Molecular-Weight-Polyethylene (UHMWPE) as a Promising Polymer Material for Biomedical Applications: A Concise Review
Next Article in Special Issue

In recent years, the performances of rubber composite insulators, which operate in the coastal foggy regions, have attracted researchers’ concern because of the observation of their degradation. In this paper, salt-fog experiments with DC test voltage of high-temperature vulcanized (HTV) silicone rubber (SR) have been conducted. The electrical strength and material performances of samples with salt-fog treatment were focused on. The DC flashover voltage, hydrophobicity, scanning electron microscopy (SEM), Fourier transform infrared spectroscopy (FTIR), and dielectric parameter were investigated. It was found that the samples’ performances deteriorated after salt-fog treatment. The DC flashover voltage of HTV SR decreased in the salt-fog environment. The hydrophobicity of the material deteriorated and the static contact angle (CA) became small. Under the action of electric and thermal stress, the surface of samples after salt-fog treatment became rough and porous. The absorption peak of the hydrophobic groups decreased, indicating that the molecular chain of SR material was broken, and the filler was consumed, bringing down the arc resistance of the sample. The absorption of moisture further led to insulation performance loss and then reduced the electrical strength of the material. Degradation of physicochemical properties will eventually lead to a decline in electrical strength. View Full-Text
Keywords: silicone rubber; salt-fog; DC electrical strength; hydrophobicity; SEM; FTIR; dielectric parameter silicone rubber; salt-fog; DC electrical strength; hydrophobicity; SEM; FTIR; dielectric parameter
►▼ Show Figures 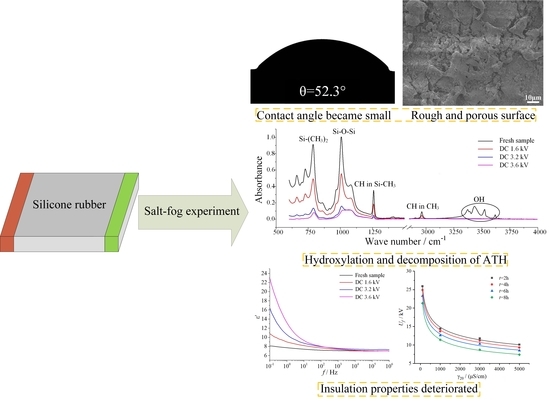