The Crosstalk between Tumor Cells and the Microenvironment in Hepatocellular Carcinoma: The Role of Exosomal microRNAs and Their Clinical Implications

The communication between hepatocellular carcinoma (HCC) cells and their microenvironment is an essential mechanism supporting or preventing tumor development and progression. Recent evidence has identified extracellular vesicles (EVs) as one of the mechanisms mediating paracrine signaling between cells. Exosomes, the most described class of EVs, deliver proteins, mRNAs, noncoding RNAs, DNA, and lipids to recipient cells, also at remote distances. MicroRNAs (miRNAs), as part of the non-coding RNA exosomal cargo, have an important role in regulating cellular pathways in targeted cells, regulating several processes related to tumor progression invasion and metastasis, such as angiogenesis, immune-escape, epithelial-to-mesenchymal transition, invasion, and multi-drug resistance. Accumulating evidence suggests exosomal miRNAs as relevant players in the dynamic crosstalk among cancerous, immune, and stromal cells in establishing the tumorigenic microenvironment. In addition, they sustain the metastasic niche formation at distant sites. In this review, we summarized the recent findings on the role of the exosome-derived miRNAs in the cross-communication between tumor cells and different hepatic resident cells, with a focus on the molecular mechanisms responsible for the cell re-programming. In addition, we describe the clinical implication derived from the exosomal miRNA-driven immunomodulation to the current immunotherapy strategies and the molecular aspects influencing the resistance to therapeutic agents. View Full-Text
Keywords: exosomes; miRNA; exosomal miRNA; hepatocellular carcinoma; liver cancer; HCC; tumor microenvironment; TME exosomes; miRNA; exosomal miRNA; hepatocellular carcinoma; liver cancer; HCC; tumor microenvironment; TME
►▼ Show Figures 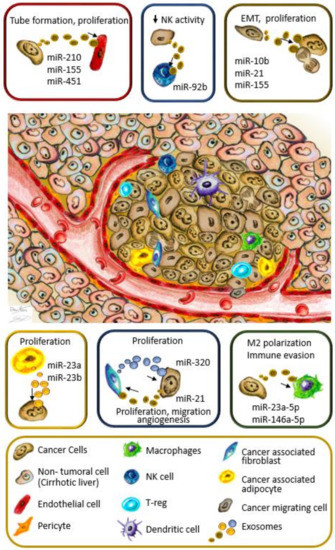 
Pascut D, Pratama MY, Vo NVT, Masadah R, Tiribelli C. The Crosstalk between Tumor Cells and the Microenvironment in Hepatocellular Carcinoma: The Role of Exosomal microRNAs and Their Clinical Implications. Cancers. 2020; 12(4):823. https://doi.org/10.3390/cancers12040823