The ING3 candidate tumour suppressor belongs to a family of histone modifying proteins involved in regulating cell proliferation, senescence, apoptosis, chromatin remodeling, and DNA repair. It is a stoichiometric member of the minimal NuA4 histone acetyl transferase (HAT) complex consisting of EAF6, EPC1, ING3, and TIP60. This complex is responsible for the transcription of an essential cascade of genes involved in embryonic development and in tumour suppression. ING3 has been linked to head and neck and hepatocellular cancers, although its status as a tumour suppressor has not been well established. Recent studies suggest a pro-metastasis role in prostate cancer progression. Here, we describe a transgenic mouse strain with insertional mutation of an UbC-mCherry expression cassette into the endogenous Ing3 locus, resulting in the disruption of ING3 protein expression. Homozygous mutants are embryonically lethal, display growth retardation, and severe developmental disorders. At embryonic day (E) 10.5, the last time point viable homozygous embryos were found, they were approximately half the size of heterozygous mice that develop normally. µCT analysis revealed a developmental defect in neural tube closure, resulting in the failure of formation of closed primary brain vesicles in homozygous mid-gestation embryos. This is consistent with high ING3 expression levels in the embryonic brains of heterozygous and wild type mice and its lack in homozygous mutant embryos that show a lack of ectodermal differentiation. Our data provide direct evidence that ING3 is an essential factor for normal embryonic development and that it plays a fundamental role in prenatal brain formation. View Full-Text
Keywords: Ing3; ING Proteins; insertional mutation; growth retardation; embryonic lethal Ing3; ING Proteins; insertional mutation; growth retardation; embryonic lethal
►▼ Show Figures 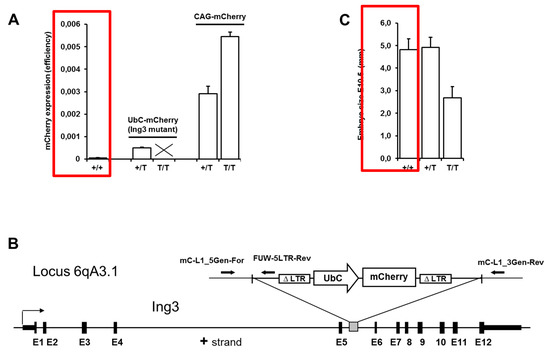