Dysregulation of Macropinocytosis Processes in Glioblastomas May Be Exploited to Increase Intracellular Anti-Cancer Drug Levels: The Example of Temozolomide
Previous Article in Special Issue

Cancer associated fibroblasts (CAFs) play a main role in breast cancer progression and metastasis. Estrogens modulate in breast CAFs the expression of microRNAs (miRNAs) that are involved in the development of many tumors. In order to provide novel insights on the regulation of miRNAs by estrogens in breast cancer, we analyzed the expression of 754 miRNAs in CAFs obtained from primary mammary tumors and CAFs derived from a cutaneous breast cancer metastasis. Using the TaqMan™ Human MicroRNA Array, we found that 17β-estradiol (E2) modulates numerous peculiar and common miRNAs in CAFs derived from primary and the metastatic malignancies. In particular, we assessed that E2 modulates 133 miRNAs (41 up and 92 downregulated) in CAFs derived from primary breast tumors, whereas E2 modulates 415 miRNAs (399 up and 16 downregulated) in CAFs derived from a cutaneous metastasis of breast carcinoma. Therefore, a number of miRNAs three times higher in metastatic CAFs with respect to primary breast CAFs was found modulated by E2. Our findings shed new light on the cumulative regulation of miRNAs by E2 in the main players of the tumor microenvironment as CAFs. Moreover, our data may be taken into consideration that is useful toward innovative prognostic and therapeutic approaches in breast cancer progression. View Full-Text
Keywords: breast cancer; metastasis; CAFs; estrogens; microRNAs breast cancer; metastasis; CAFs; estrogens; microRNAs
►▼ Show Figures 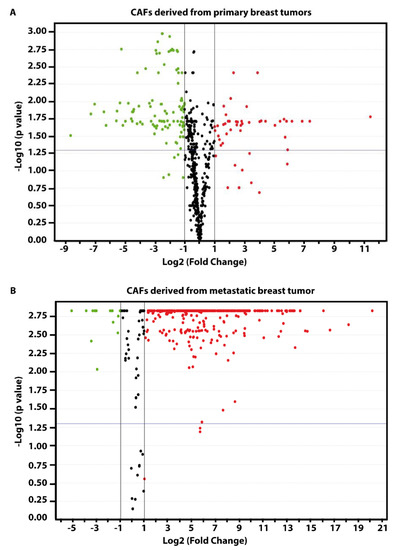