The FOXO1 transcription factor plays a central role in the proliferation and survival of B cells at several stages of differentiation. B cell malignancies, with exception of classical Hodgkin lymphoma, maintain expression of FOXO1 at levels characteristic for their non-malignant counterparts. Extensive expression profiling had revealed that Burkitt lymphoma (BL) show many characteristics of the dark zone (DZ) germinal center (GC) B cell program. Here we show that FOXO1 knockdown inhibits proliferation of human BL cell lines. The anti-proliferative effect of the FOXO1 knockdown is associated with the repression of the DZ B cell program including expression of MYB, CCND3, RAG2, BACH2, and CXCR4. In addition, the induction of signaling pathways of the light zone (LZ) program like NF-κB and PI3K-AKT was observed. Using a rescue experiment we identified downregulation of the proto-oncogene MYB as a critical factor contributing to the antiproliferative effect of FOXO1 knockdown. In an attempt to estimate the feasibility of pharmacological FOXO1 repression, we found that the small molecular weight FOXO1 inhibitor AS1842856 induces cell death and growth arrest in BL cell lines at low concentrations. Interestingly, we found that overactivation of FOXO1 also induces growth inhibition in BL cell lines, indicating the importance of a tight regulation of FOXO1 activity in BL. View Full-Text
Keywords: FOXO1; Burkitt lymphoma; germinal center dark zone B cell proliferation program FOXO1; Burkitt lymphoma; germinal center dark zone B cell proliferation program
►▼ Show Figures 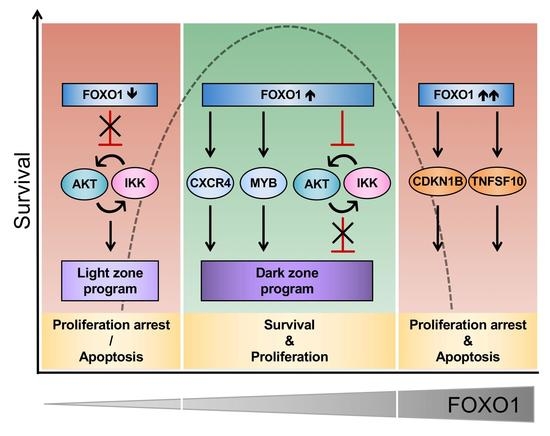