:
The development of polymer-based devices has attracted much attention due to their miniaturization, flexibility, lightweight and sustainable power sources with high efficiency in the field of wearable/portable electronics, and energy system. In this work, we proposed a polyvinylidene fluoride (PVDF)-based composite matrix for both energy harvesting and energy storage applications. The physicochemical characterizations, such as X-ray diffraction, laser Raman, and field-emission scanning electron microscopy (FE-SEM) analyses, were performed for the electrospun PVDF/sodium niobate and PVDF/reduced graphene oxide composite film. The electrospun PVDF/sodium niobate nanofibrous mat has been utilized for the energy harvester which shows an open circuit voltage of 40 V (peak to peak) at an applied compressive force of 40 N. The PVDF/reduced graphene oxide composite film acts as the electrode for the symmetric supercapacitor (SSC) device fabrication and investigated for their supercapacitive properties. Finally, the self-charging system has been assembled using PVDF/sodium niobate (energy harvester), and PVDF/reduced graphene oxide SSC (energy storage) and the self-charging capability is investigated. The proposed self-charging system can create a pathway for the all-polymer based composite high-performance self-charging system.
Keywords:
polyvinylidene fluoride; polymer nanocomposites; flexible supercapacitors; electrospinning; self-powered system

The extensive use of renewable energy/power sources paves the way for the growing energy crisis and the environmental pollution issues, which creates the demand towards the need for energy sources [1,2]. To overcome the energy crisis, many researchers are focused on developing new energy devices based on inorganic materials and their composites [3,4,5,6]. From the available literature, the inorganic composite materials have a higher advantage due to their synergetic effect arising from the composite materials, which show enhanced performances [7]. The composition, including the carbon and carbon derivatives composites with the metal oxides and sulfides, have received considerable attention in the field of energy [8]. However, the rigid nature of the composite materials makes them difficult to apply in flexible and lightweight electronics applications. For developing flexible and lightweight materials, polymer nanocomposites attracted much compared to the other conventional composites due to their improved property and performance [9]. In recent reports, the polymer composites have high flexibility, hydrophilicity/hydrophobicity, thermal stability, gas barrier performance, optical clarity, decreased flammability, and enhanced mechanical properties making them the top candidate for various applications [10]. These polymer-inorganic composite materials consist of nanosized inorganic particles which are dispersed uniformly in a polymer matrix. The major advantages of these polymer composite films are ease of synthesis, lightweight, flexible, and corrosion resistance [11]. The main benefits of the composite film over the pure polymer is the enhancement in the electrical, mechanical and tensile properties of the polymer composites [12,13]. The enhancement in the properties of the composite film is mainly due to the interaction between the filler materials and the carbon chain groups in the polymer matrix [14,15]. Over several classes of polymers available, polyvinylidene fluoride (PVDF) is a highly non-reactive thermoplastic fluoropolymer produced by the polymerization of vinylidene difluoride which has high resistance towards the variety of solvents(acids, and bases) and has a low density compared to other fluoropolymers [16]. PVDF is commonly used in the chemical, semiconductor, medical, and defense industries, as well as in electrochemical energy storage (separator and binders) and energy-harvesting applications [17]. PVDF membranes are also used for Western blots for the immobilization of proteins due to its non-specific affinity for amino acids [18]. The researchers have also discovered the energy-harvesting piezoelectric properties of PVDF and exploited their use as piezoelectric nanogenerators to power tactile sensors, inexpensive strain gauges, and lightweight audio transducers [19,20]. PVDF is also used in the field of energy storage as the standard binder for the preparation of composite electrodes for electrochemical energy storage and as the separator since it is chemically inert over a wide potential range and does not react with the electrolyte in the system [21]. Due to the nature of the PVDF and its extensive properties in the field of energy, PVDF incorporated with the nanomaterials can be applied to the field of wearable and flexible energy harvesting and storing applications. The utilization of the sodium niobate cubes in the PVDF for the piezoelectric nanogenerator is as follows: (i) sodium niobate is a lead-free piezoceramic with biocompatible in nature; (ii) bulk production of sodium niobate nanocubes; (iii) ease of large-scale fabrication of device with low cost; (iv) the electric field can effectively pole random piezoelectric domains to one direction due to the ferroelectric nature of the sodium niobate; (v) PVDF polymer plays a major role of preventing the cracking and breaking of sodium niobate cubes upon mechanical strain which helps in long cycle life, and (vi) its flexible nature which increases the volume fraction of the sodium niobate in the polymer matrix results in high piezoelectric response. For the above reasons, we utilized sodium niobate cubes in the PVDF matrix for the piezoelectric nanogenerator application. In this work, we incorporated sodium niobate cubes in the PVDF polymer matrix and fabricated the piezoelectric nanofibers via electrospinning for the lightweight piezoelectric energy-harvesting application, and for the energy storage, graphene in the PVDF matrix to form the flexible conductive film as the electrode for a supercapacitor application. The fabricated electrospun PVDF/sodium niobate nanogenerator and the PVDF/reduced graphene oxide symmetric supercapacitor (SSC) was coupled to form a self-charging system in which the flexible power generator can charge the supercapacitor under the applied compressive mechanical force. The above mentioned findings can provide new insight into the development of flexible self-charging electronics applications.

A facile hydrothermal technique was employed for the preparation of sodium niobate nanocubes. Briefly, an aqueous solution of 240 mM sodium hydroxide was prepared in 60 mL of double distilled water [22]. We added 3.76 mM of niobium oxide to the sodium hydroxide solution and stirred for 1 h until complete dissolution to form a homogeneous solution. The prepared solution was then transferred to a 100 mL Teflon lined stainless steel autoclave and kept at 150 °C for 10 h. After the completion of the hydrothermal reaction, the obtained product was centrifuged with doubly distilled water several times and dried at 80 °C in a hot air oven. The final product was annealed further at 600 °C for 12 h to obtain pure sodium niobate nanocubes. The reaction mechanism in the formation of sodium niobate is due to orientation attached with an Ostwald ripening process as reported in the earlier works [23,24].

A facile and low-cost electrospinning technique was adopted for the preparation of composite PVDF/sodium niobate nanofibers. Briefly, the PVDF polymer solution was prepared as per the literature [13]. At first, 10 wt % of PVDF was dissolved in acetone and N,N-dimethylacetamide in the ratio of 70:30 (V/V), then further ultra-sonicated to form the transparent polymer solution. To the prepared PVDF solution, 10 wt% of the sodium niobate was added and stirred vigorously for 48 h to form a white-colored viscous solution. The obtained viscous solution is loaded on to a 15 mL syringe and placed in the electrospinning setup with a stainless-steel needle size of 25 G at a flow rate of 0.5 mL/h under a constant voltage of 15 KV with the tip to collector distance 10 cm to obtain PVDF/sodium niobate nanofibrous mat. The obtained electrospun mat was dried in a vacuum oven at 60 °C for 24 h for stabilization and to remove surface water. After the stabilization process, the mat as used for the fabrication of a nanogenerator device. The nanogenerator was fabricated using an electrospun mat of dimension 2 × 2 cm2 with Al as the top and bottom electrodes. Cu wires were attached with silver paste to the top and bottom electrodes to establish the electrical connections. The fabricated device was used for further characterization.

A simple modified Hummers method followed by the sonochemical technique was adopted for the preparation of graphene nanosheets [25]. Initially, graphene oxide (GO) sheets were prepared using graphite powder, H2SO4, KMnO4, H2O2, and HCl as the starting precursor according to the modified Hummers method as stated in our earlier reports. A simple sonochemical reaction was adopted for the preparation of graphene nanosheets using prepared GO as the starting material [25]. Concisely, 0.2 g of GO is suspended in 200 mL of the double-distilled water, and the pH of the GO solution was adjusted by the addition of NaOH solution to reach the pH value of 10 followed by the addition of hydrazine hydrate (2 mL) which acts as the reducing agent. The prepared solution subjected to ultrasound irradiation for 5 h under ambient conditions. After completion of the reaction, the resulted graphene nanosheets were centrifuged several times using distilled water until the product is free from a trace amount of residual impurities and dried in a hot air oven at 80 °C before further characterization.

The PVDF/reduced graphene oxide composite film electrode was prepared using a simple solution casting technique. A 25 wt % of prepared graphene nanosheet was added to the prepared PVDF solution and ultra-sonicated until the graphene nanosheets are finely dispersed in the polymeric solution. The graphene nanosheet dispersed polymer solution was poured onto the pre-cleaned petri dish and kept in a hot air oven at 60 °C for 24 h. After complete drying, the composite film was used as the electrode for the supercapacitor. The electrical conductivity of the prepared PVDF/reduced graphene oxide film is around 2 S/cm. The polymer gel electrolyte composed of PVA and H3PO4 was prepared using the method previously reported in the literature [26]. Briefly, 5 g of PVA is dissolved in 50 mL of water using mechanical stirring at a temperature of 80 °C. After the complete dissolution of PVA, a transparent solution was obtained to which 5 g of H3PO4 was added and allowed to vigorous stirring under heat until a transparent gel was formed. Finally, the prepared PVA/H3PO4 polymer gel was used for the fabrication of a supercapacitor device.
The supercapacitor device was fabricated using the prepared PVDF/reduced graphene oxide composite film as the electrode for the device with PVA/H3PO4 as the electrolyte. The gel electrolyte was coated to the electrode surface of dimension 1.0 × 1.0 cm2, and then two electrodes were sandwiched to form as the supercapacitor device. The electrochemical analysis of the fabricated supercapacitor device was examined via cyclic voltammetry (CV) and galvanostatic charge-discharge (CD) measurements using an Autolab PGSTAT302N electrochemical workstation.

In this work, we successfully fabricated the PVDF/reduced graphene oxide electrode and electrospun PVDF/sodium niobate nanofibrous mat as the active materials for the supercapacitor and nanogenerator device. The individual performance has been examined by fabricating the PVDF/reduced graphene oxide supercapacitor device and PVDF/sodium niobate nanogenerator device, which shows an excellent performance as the energy storage and harvester, respectively. The integrated self-charging power system can charge the supercapacitor device to 0.8 V in 190 s. Collectively, from the obtained results, the novel self-charging power system will paves the way towards the development of polymer-based self-charging system for wearable/portable electronics applications. 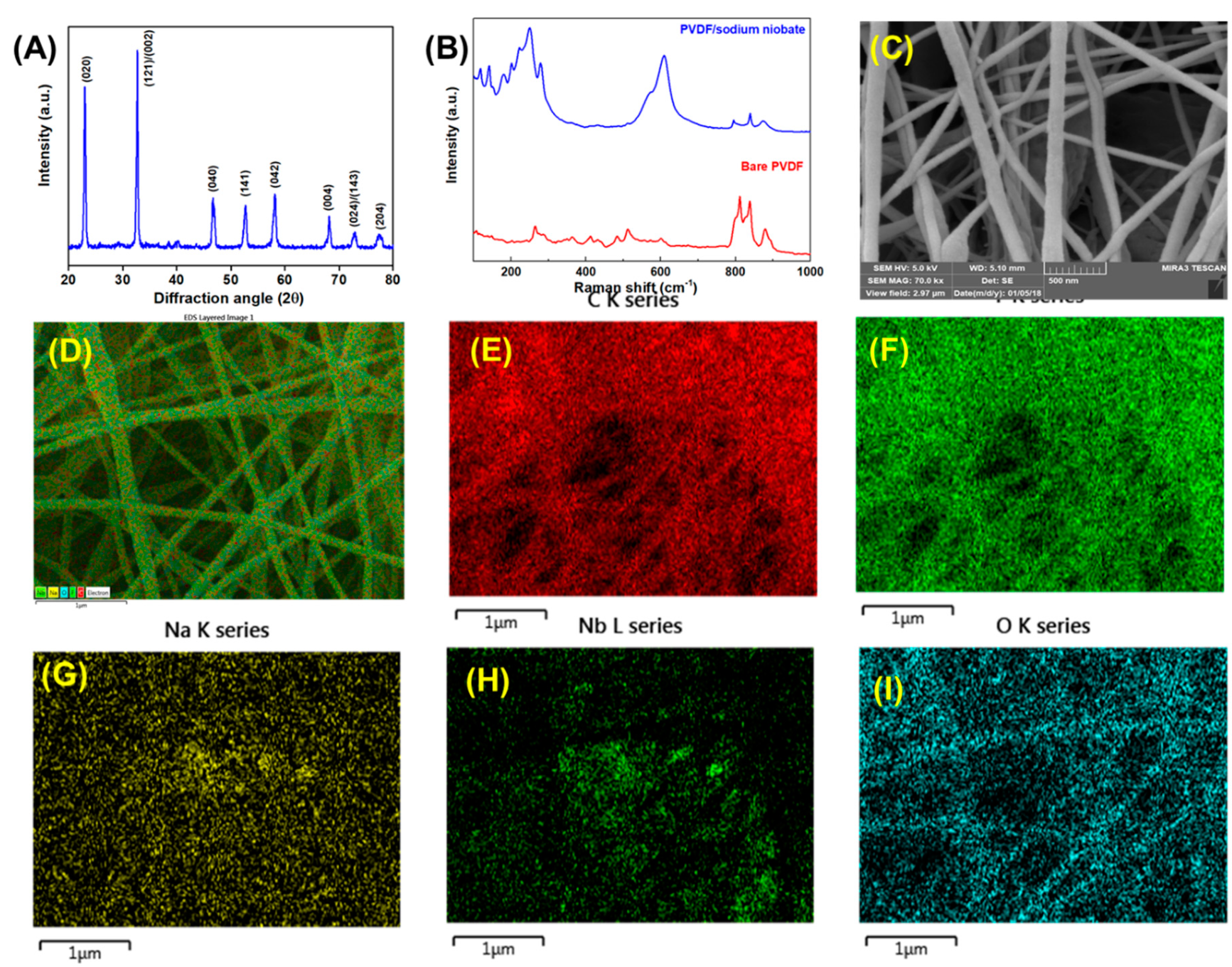 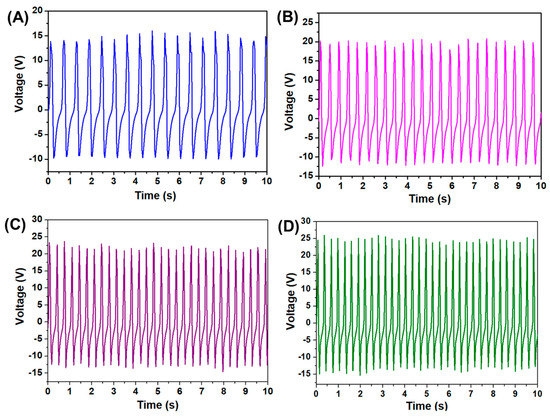