Deoxynivalenol (DON) is commonly detected in cereals, and is a threat to human and animal health. The effects of microbiological detoxification are now being widely studied. A total of 24 pigs (over four months) were randomly divided into three treatments. Treatment A was fed with a basal diet as the control group. Treatment B was fed with naturally DON-contaminated wheat as a negative control group. Treatment C was fed with a contaminated diet that also had Clostridium sp. WJ06, which was used as a detoxicant. Growth performance, relative organ weight, intestinal morphology, and the intestinal flora of bacteria and fungi were examined. The results showed that after consuming a DON-contaminated diet, the growth performance of the pigs decreased significantly (p < 0.05), the relative organ weight of the liver and kidney increased significantly (p < 0.05), and the integrity of the intestinal barrier was also impaired, though the toxic effects of the contaminated diets on growing pigs were relieved after adding Clostridium sp. WJ06. The data from MiSeq sequencing of the 16S ribosomal ribonucleic acid (rRNA) gene and internal transcribed spacer 1 (ITS1) gene suggested that the abundance of intestinal flora was significantly different across the three treatments. In conclusion, the application of Clostridium sp. WJ06 can reduce the toxic effects of DON and adjust the intestinal microecosystem of growing pigs. View Full-Text
Keywords: Clostridium sp. WJ06; deoxynivalenol; pig; intestinal morphology; microbial diversity Clostridium sp. WJ06; deoxynivalenol; pig; intestinal morphology; microbial diversity
►▼ Show Figures 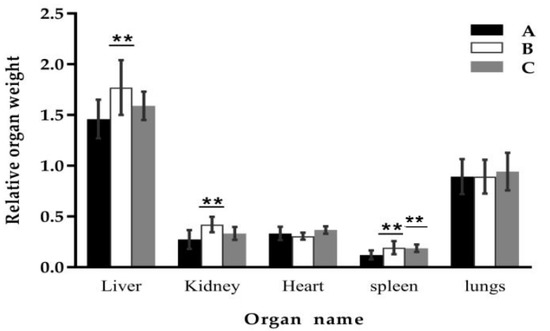