Occurrence of Fungi and Fungal Toxins in Fish Feed during Storage

Deoxynivalenol (DON) is a mycotoxin frequently found in cereals, and pigs are one of the most sensitive farm species to DON. The aim of this study was to determine the effects of DON in very low doses on peripheral blood mononuclear cells (PBMC) and on particular lymphocyte subpopulations. The cells were exposed to 1, 10 and 100 ng/mL of DON and lymphocyte viability, proliferation, and cytokine (Interleukin (IL)-1β, IL-2, IL-8, IL-17, Interferon (IFN) γ and tumor necrosis factor (TNF) α production were studied. Cells exposed to DON for 5 days in concentrations of 1 and 10 ng/mL showed higher viability compared to control cells. After 18 h of DON (100 ng/mL) exposure, a significantly lower proliferation after mitogen stimulation was observed. In contrast, an increase of spontaneous proliferation induced by DON (100 ng/mL) was detected. After DON exposure, the expression of cytokine genes decreased, with the exception of IL-1β and IL-8, which increased after 18 h exposure to 100 ng/mL of DON. Among lymphocyte subpopulations, helper T-cells and γδ T-cells exhibiting lower production of IL-17, IFNγ and TNFα were most affected by DON exposure (10 ng/mL). These findings show that subclinical doses of DON lead to changes in immune response. View Full-Text
Keywords: deoxynivalenol; pig; subclinical dose; lymphocytes; PBMC; cytokines; animal health; immunotoxicity deoxynivalenol; pig; subclinical dose; lymphocytes; PBMC; cytokines; animal health; immunotoxicity
►▼ Show Figures 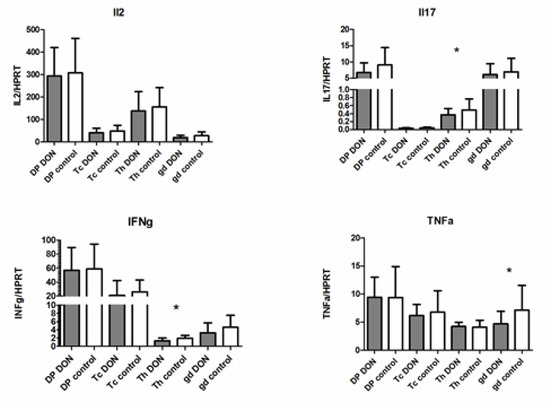