The transfer of Microcystis aeruginosa from freshwater to estuaries has been described worldwide and salinity is reported as the main factor controlling the expansion of M. aeruginosa to coastal environments. Analyzing the expression levels of targeted genes and employing both targeted and non-targeted metabolomic approaches, this study investigated the effect of a sudden salt increase on the physiological and metabolic responses of two toxic M. aeruginosa strains separately isolated from fresh and brackish waters, respectively, PCC 7820 and 7806. Supported by differences in gene expressions and metabolic profiles, salt tolerance was found to be strain specific. An increase in salinity decreased the growth of M. aeruginosa with a lesser impact on the brackish strain. The production of intracellular microcystin variants in response to salt stress correlated well to the growth rate for both strains. Furthermore, the release of microcystins into the surrounding medium only occurred at the highest salinity treatment when cell lysis occurred. This study suggests that the physiological responses of M. aeruginosa involve the accumulation of common metabolites but that the intraspecific salt tolerance is based on the accumulation of specific metabolites. While one of these was determined to be sucrose, many others remain to be identified. Taken together, these results provide evidence that M. aeruginosa is relatively salt tolerant in the mesohaline zone and microcystin (MC) release only occurs when the capacity of the cells to deal with salt increase is exceeded. View Full-Text
Keywords: Microcystis aeruginosa; microcystin; salt stress; metabolomic; transcript Microcystis aeruginosa; microcystin; salt stress; metabolomic; transcript
►▼ Show Figures 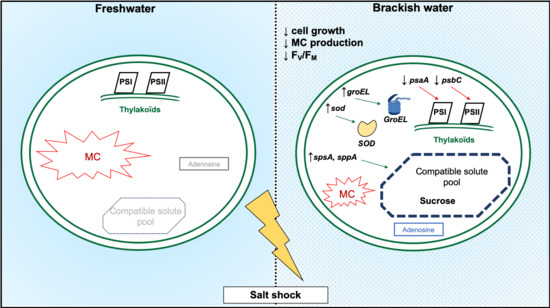