The ecological conditions during the ripening of dry-cured ham favour the development of moulds on its surface, being frequently the presence of Penicillium nordicum, a producer of ochratoxin A (OTA). Biocontrol using moulds and yeasts usually found in dry-cured ham is a promising strategy to minimize this hazard. The aim of this work is to evaluate the effect of previously selected Debaryomyces hansenii and Penicillium chrysogenum strains on growth, OTA production, and relative expression of genes involved in the OTA biosynthesis by P. nordicum. P. nordicum was inoculated against the protective cultures individually and combined on dry-cured ham for 21 days at 20 °C. None of the treatments reduced the growth of P. nordicum, but all of them decreased OTA concentration. The lower production of OTA could be related to significant repression of the relative expression of otapksPN and otanpsPN genes of P. nordicum. The efficacy of the combined protective cultures was tested in 24 dry-cured hams in industrial ripening (an 8 month-long production). OTA was detected in nine of the 12 dry-cured hams in the batch inoculated only with P. nordicum. However, in the batch inoculated with both P. nordicum and the combined protective culture, a considerable reduction of OTA contamination was observed. In conclusion, although the efficacy of individual use P. chrysogenum is great, the combination with D. hansenii enhances its antifungal activity and could be proposed as a mixed protective culture to control the hazard of the presence of OTA in dry-cured ham. View Full-Text
Keywords: Penicillium nordicum; biocontrol agents; dry-cured ham; ochratoxin A (OTA) Penicillium nordicum; biocontrol agents; dry-cured ham; ochratoxin A (OTA)
►▼ Show Figures 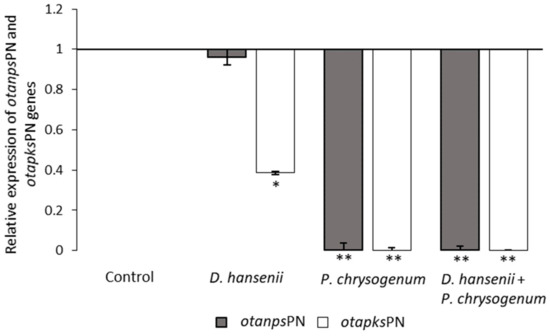 
Cebrián, Eva, Mar Rodríguez, Belén Peromingo, Elena Bermúdez, and Félix Núñez. 2019. "Efficacy of the Combined Protective Cultures of Penicillium chrysogenum and Debaryomyces hansenii for the Control of Ochratoxin A Hazard in Dry-Cured Ham" Toxins 11, no. 12: 710. https://doi.org/10.3390/toxins11120710