Could Pomegranate Juice Help in the Control of Inflammatory Diseases?
Next Article in Special Issue

Vitamin C Intake is Inversely Associated with Cardiovascular Mortality in a Cohort of Spanish Graduates: the SUN Project

Vitamin C plays a role in neuronal differentiation, maturation, myelin formation and modulation of the cholinergic, catecholinergic, and glutaminergic systems. This review evaluates the link between vitamin C status and cognitive performance, in both cognitively intact and impaired individuals. We searched the PUBMED, SCOPUS, SciSearch and the Cochrane Library from 1980 to January 2017, finding 50 studies, with randomised controlled trials (RCTs, n = 5), prospective (n = 24), cross-sectional (n = 17) and case-control (n = 4) studies. Of these, 36 studies were conducted in healthy participants and 14 on cognitively impaired individuals (including Alzheimer’s and dementia). Vitamin C status was measured using food frequency questionnaires or plasma vitamin C. Cognition was assessed using a variety of tests, mostly the Mini-Mental-State-Examination (MMSE). In summary, studies demonstrated higher mean vitamin C concentrations in the cognitively intact groups of participants compared to cognitively impaired groups. No correlation between vitamin C concentrations and MMSE cognitive function was apparent in the cognitively impaired individuals. The MMSE was not suitable to detect a variance in cognition in the healthy group. Analysis of the studies that used a variety of cognitive assessments in the cognitively intact was beyond the scope of this review; however, qualitative assessment revealed a potential association between plasma vitamin C concentrations and cognition. Due to a number of limitations in these studies, further research is needed, utilizing plasma vitamin C concentrations and sensitive cognitive assessments that are suitable for cognitively intact adults. View Full-Text
Keywords: vitamin C; ascorbic acid; central nervous system; cognition; Alzheimer’s; dementia; MMSE vitamin C; ascorbic acid; central nervous system; cognition; Alzheimer’s; dementia; MMSE
►▼ Show Figures 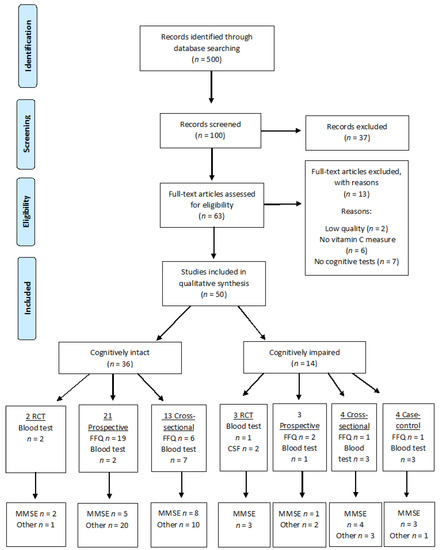