:
Dietary fat and oxidative stress are hypothesized to contribute to non-alcoholic fatty liver disease and progression to steatohepatitis. To determine the effects of dietary fat content on hepatic triglyceride, body fat distribution and markers of inflammation and oxidative stress, overweight/obese subjects with normal glucose tolerance consumed a control diet (CONT: 35% fat/12% saturated fat/47% carbohydrate) for ten days, followed by four weeks on a low fat (LFD (n = 10): 20% fat/8% saturated fat/62% carbohydrate) or high fat diet (HFD (n = 10): 55% fat/25% saturated fat/27% carbohydrate). Hepatic triglyceride content was quantified by MRS and abdominal fat distribution by MRI. Fasting biomarkers of inflammation (plasma hsCRP, IL-6, IL-12, TNFα, IFN-γ) and oxidative stress (urinary F2-α isoprostanes) were measured. Body weight remained stable. Compared to the CONT, hepatic triglyceride decreased on the LFD (mean (95% CI): change −2.13% (−3.74%, −0.52%)), but did not change on the HFD and there was no significant difference between the LFD and HFD. Intra-abdominal fat did not change significantly on either diet, but subcutaneous abdominal fat increased on the HFD. There were no significant changes in fasting metabolic markers, inflammatory markers and urinary F2-α isoprostanes. We conclude that in otherwise healthy overweight/obese adults under weight-neutral conditions, a diet low in fat and saturated fat has modest effects to decrease liver fat and may be beneficial. On the other hand, a diet very high in fat and saturated fat had no effect on hepatic triglyceride or markers of metabolism, inflammation and oxidative stress.
Keywords:
non-alcoholic fatty liver; dietary fat; saturated fat; oxidative stress

Nonalcoholic fatty liver disease (NAFLD) is a condition in which fat accumulates in the liver in the absence of significant alcohol intake. A subset of individuals with NAFLD develop inflammation, hepatocyte injury and fibrosis (non-alcoholic steatohepatitis or NASH) which can progress to cirrhosis [1]. Combining this effect with the obesity epidemic, NASH is now projected to be the leading cause for liver transplant by 2020 [2]. Oxidative stress and inflammation are thought to be key factors in this progression [3].
Dietary fat may be an important modifiable factor in the development of NAFLD and NASH. Multiple animal models have demonstrated that high fat/saturated fat diets (HFD) increase liver fat and promote hepatocyte injury [4,5], but few well-controlled, isocaloric dietary intervention studies in humans have been performed. Two studies found that two to three weeks on a low fat/low saturated fat diet (LFD) decreased liver fat compared to a HFD [6,7], while we demonstrated in older non-diabetic adults a modest effect of four weeks on a LFD to decrease liver fat, but no effect of a HFD [8]. Based on this last study, the ability of high dietary fat intake to induce fatty liver in humans is questionable.
We hypothesized that dietary fat plays a causal role in the development of NAFLD. Thus, an isocaloric HFD should increase and a LFD should decrease hepatic triglyceride content and associated oxidative stress and inflammation compared to a control diet containing moderate amounts of fat (CONT).

This study was a prospective, random order, controlled dietary feeding study. To standardize baseline diet composition, all subjects completed a 10-day CONT diet prior to the intervention diet. The CONT was based on a standard American macronutrient composition and was similar to the average macronutrient composition reported by study subjects. Thus, 10 days was felt to be adequate time to achieve standardization. The CONT diet was then followed by four weeks on either a LFD or HFD. Seven participants completed both intervention diets, with the CONT diet being repeated before each intervention diet and a 6-week washout period separating the two diet periods. During the washout period study subjects ate their usual diet and received no food from the study.

Participants were enrolled if they were 18–55 years old, with normal fasting (<100 mg/dL) and 2 h glucose (<140 mg/dL) on an oral glucose tolerance test, and BMI > 27 kg/m2. Subjects had to be healthy, nonsmokers, with normal liver and renal function, and drink fewer than 2 alcoholic drinks/day by self-report. Exclusion criteria included food allergies/intolerances, contraindications to MRI, and medications affecting inflammation, insulin sensitivity, or liver fat. All subjects gave written informed consent. This study was approved by the Institutional Review Boards of the Veterans Affairs Puget Sound Health Care System and the University of Washington and was in accordance with ethical standards on human experimentation.

Menus were designed by a research nutritionist using ProNutra (VioCare, Inc., Princeton, NJ, USA): CONT: 35% energy from fat/12% saturated fat; LFD: 20% fat/8% saturated fat; HFD: 55% fat/25% saturated fat. Major sources of fats in all three diets included butter and high oleic safflower oil. Vegetable content was matched. Because fructose was limited on the HFD due to the low carbohydrate content, fructose was limited in all diets to <30 g/day based on a 2000 kcal/day diet (Table 1). Menus are provided in supplemental Tables S1–S3.
Table 1. Diet composition: baseline diet as estimated by 3-day food record and study diets consumed.
Data for the study diet composition is inclusive of all subjects who completed the control and corresponding LFD or HFD (n = 10 for each). Mean diet composition data for the subset of subjects (n = 7) who completed both diet protocols is not listed separately here, but was similar to those who completed only one of the intervention diets. All data are reported as mean ± SEM. a Food record data were only available on 11 subjects. Abbreviations: MUFA = mono-unsaturated fatty acids, PUFA = poly-unsaturated fatty acids. 1 p < 0.017 compared to CONT LFD.2 p < 0.017 compared to CONT HFD.3 p < 0.017 HFD vs. LFD for the 7 subjects who completed both diet interventions.
At baseline, subjects completed a 3-day food record. Fructose values were estimated from the USDA Standard Reference 18–20 (USDA Database for the Added Sugar Content of Selected Foods, Release 1, 2006) [9] and Food and Nutrient Database for Dietary Studies 2.0 [10]. Caloric needs were estimated using the average of the Mifflin-St. Jeor [11] and Harris-Benedict [12] equations, adjusted for physical activity. All food was prepared in the University of Washington Nutrition Research Kitchen. Subjects picked up their food and were weighed twice weekly, and caloric intake was adjusted to achieve weight stability. Subjects were instructed to maintain regular physical activity and to eat all of the food provided, not to eat any non-study food, and to report any deviations from the diet. Physical activity was assessed at the end of each control diet and each intervention diet by use of the short form seven-day international physical activity questionnaire (IPAQ) [13]. To determine compliance, subjects recorded all food consumed each day using a checklist which was returned to the nutritionist.

A total of 13 subjects (10M/3F: 3 African Americans, 1 Asian and 9 Caucasians; age 36 ± 2.9 years; BMI 33.6 ± 1.3 kg/m2; fasting glucose 90.3 ± 1.9 mg/dL; 2-h glucose 94.2 ± 6.0 mg/dL) completed study diets and procedures. NAFLD (liver fat >5%) was present in 7/13 subjects. All three African Americans had <5% liver fat.
Analysis of baseline food records and study diet content and composition is reported in Table 1. Protein, fiber and cholesterol content were fairly well matched across study diets. Servings of fruit could not be matched due to differences in carbohydrate content of the LFD and HFD. This resulted in little to no fruit on the HFD and more fruit on the LFD compared to the CONT diet. As a result, fructose content and vitamin C were higher on the LFD and lower on the HFD. However, the absolute amounts of fructose consumed were kept relatively low on both the LFD and HFD. MUFA and PUFA content were lower on the LFD and higher on the HFD due to overall differences in fat content resulting in differences in the fat-soluble antioxidant, vitamin E.
All participants except two reported consuming all food provided. One subject had a short illness while on the LFD diet. Her recorded diet intake revealed lower calorie intake, but macronutrient composition similar to the prescribed diet (18.9% protein, 18.8% fat and 62.3% carbohydrate). The second subject failed to pick up his food once during the LFD and thus was off diet for 2 days.
There was no significant change in physical activity between the control diet and the corresponding intervention diets (p > 0.2 for all comparisons, data not shown). 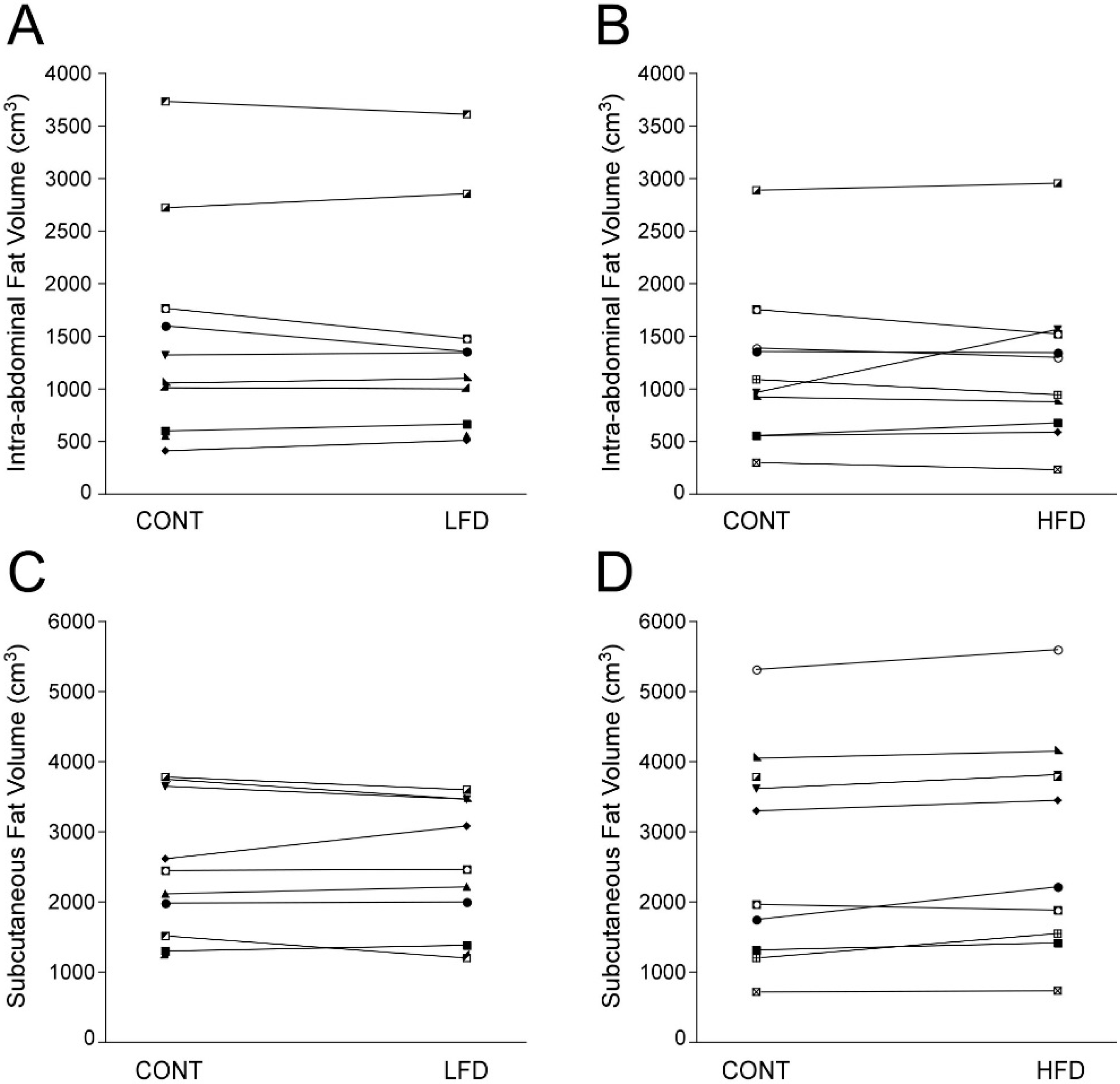 3.4. Comparison of the LFD and HFD

Based on the absence of a significant change in hepatic triglyceride content after a very high fat/high saturated fat diet, we conclude that it is unlikely that excess dietary fat in the absence of caloric excess is a major driver in the development of NAFLD in otherwise healthy overweight/obese subjects. However, a diet very low in fat and saturated fat showed a modest decrease in hepatic triglyceride content and thus over a longer period of time may protect against development or progression of NAFLD.

We are grateful to the study participants for their contribution and time. This study was supported by funding and resources from the Department of Veteran Affairs, the Diabetes Research Center (P30DK017047), the Institute for Translational Health Sciences (UL1TR000423), the Nutrition Obesity Research Center (P30 DK035816), the Diagnostic Imaging Sciences Center at the University of Washington, and the Brazilian Federal Agency for Support and Evaluation of Graduate Education (CAPES).

The authors have no conflicts of interest to disclose.