Caffeine Intake and Its Sex-Specific Association with General Anxiety: A Cross-Sectional Analysis among General Population Adults

In soccer, physical, tactical, and decision-making processes are highly important facets of successful performance. Caffeine has well established effects for promoting both physical and cognitive performance, but the translation of such benefits specifically for soccer match play is not well established. This study examined the effects of acute caffeine ingestion on tactical performance during small-sided games (SSG) in professional soccer players. Nineteen soccer players (22 ± 4 years) underwent a randomized, counterbalanced, crossover, double-blind placebo-controlled trial. The protocol consisted of 5 bouts of 5-min SSG with 3 players plus a goalkeeper in each team (3 + GK × 3 + GK) with each SSG separated by 1 min rest intervals. Tactical performance was assessed using the system of tactical assessment in soccer (FUT-SAT). Prior to each experimental trial, participants ingested caffeine (5 mg·kg−1) or a placebo 60 min before the protocol. Overall, caffeine ingestion resulted in an increased ball possession time when compared to the placebo. When the offensive and defensive core principles were analyzed, the results were equivocal. Caffeine resulted in positive effects on some tactical decisions during the protocol, but it was deleterious or promoted no observed effect on other of the core tactical principles. Caffeine ingestion resulted in less offensive (during SSG3) and defensive (SSG 2, SSG3, and SSG4) errors. Caffeine ingestion also resulted in higher total offensive success during SSG 1 and SSG2, but it was detrimental during SSG3. Additionally, total defensive success was lower for the caffeine conditions during SSG 2 and SSG5 when compared to the placebo. In conclusion, caffeine influenced aspects of tactical decisions in soccer, resulting in fewer offensive and defensive errors, although it may be deleterious considering other tactical parameters. Future studies may clarify the effects of caffeine ingestion on specific decision-making parameters in soccer. View Full-Text
Keywords: supplementation; soccer; decision-making; tactical performance supplementation; soccer; decision-making; tactical performance
►▼ Show Figures 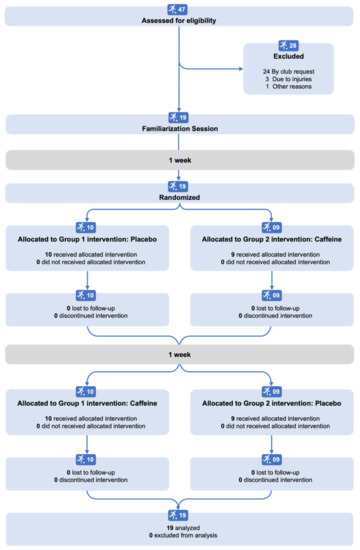