The Role of Carrageenan in Inflammatory Bowel Diseases and Allergic Reactions: Where Do We Stand?
Previous Article in Journal

A Systematic Review of Worldwide Consumption of Ultra-Processed Foods: Findings and Criticisms

A debate is ongoing on the significance and appropriateness of the NOVA classification as a tool for categorizing foods based on their degree of processing. As such, the role of ultra-processed food (UPF) on human health is still not completely understood. With this review, we aimed to investigate the actual level of consumption of UPF across countries and target populations to determine the impact in real contexts. Suitable articles published up to March 2021 were sourced through the PubMed and SCOPUS databases. Overall, 99 studies providing data on the level of UPF consumption expressed as the percentage of total energy intake were identified, for a total of 1,378,454 participants. Most of them were published in Brazil (n = 38) and the United States (n = 15), and the 24 h recall was the most-used tool (n = 63). Analysis of the results revealed that the United States and the United Kingdom were the countries with the highest percent energy intake from UPF (generally >50%), whereas Italy had the lowest levels (about 10%); the latter was inversely associated with adherence to the Mediterranean diet. High variability was also observed based on sex, age, and body mass index, with men, young people, and overweight/obese subjects generally having higher levels of consumption compared to older subjects. Overall, our findings underline the large differences in UPF intake. Since most of the observations derived from studies conducted with food questionnaires are not specifically validated for UPF, further efforts are essential to confirm the results previously obtained and to investigate further the association between UPF consumption and health status, also considering the actual contribution within different dietary patterns, which has been less investigated to date. View Full-Text
Keywords: dietary habits; dietary intake; human health; NOVA group; processing; food technology; food consumption dietary habits; dietary intake; human health; NOVA group; processing; food technology; food consumption
►▼ Show Figures 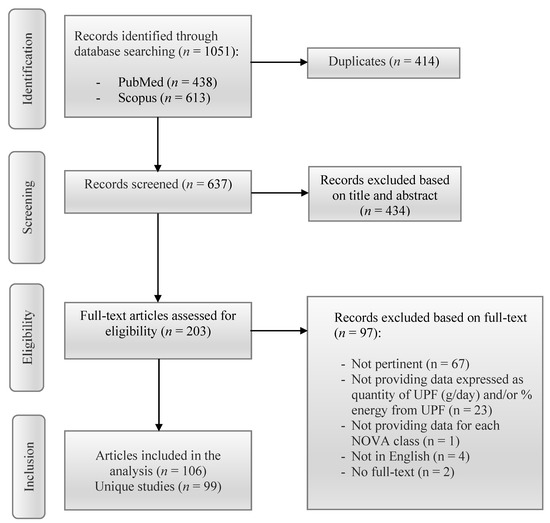