Injuries to the developing brain due to hypoxia–ischemia (HI) are common causes of neurological disabilities in preterm babies. HI, with oxygen deprivation to the brain or reduced cerebral blood perfusion due to birth asphyxia, often leads to severe brain damage and sequelae. Injury mechanisms include glutamate excitotoxicity, oxidative stress, blood–brain barrier dysfunction, and exacerbated inflammation. Nutritional intervention is emerging as a therapeutic alternative to prevent and rescue brain from HI injury. Lactoferrin (Lf) is an iron-binding protein present in saliva, tears, and breast milk, which has been shown to have antioxidant, anti-inflammatory and anti-apoptotic properties when administered to mothers as a dietary supplement during pregnancy and/or lactation in preclinical studies of developmental brain injuries. However, despite Lf’s promising neuroprotective effects, there is no established dose. Here, we tested three different doses of dietary maternal Lf supplementation using the postnatal day 3 HI model and evaluated the acute neurochemical damage profile using 1H Magnetic Resonance Spectroscopy (MRS) and long-term microstructure alterations using advanced diffusion imaging (DTI/NODDI) allied to protein expression and histological analysis. Pregnant Wistar rats were fed either control diet or bovine Lf supplemented chow at 0.1, 1, or 10 g/kg/body weight concentration from the last day of pregnancy (embryonic day 21–E21) to weaning. At postnatal day 3 (P3), pups from both sexes had their right common carotid artery permanently occluded and were exposed to 6% oxygen for 30 min. Sham rats had the incision but neither surgery nor hypoxia episode. At P4, MRS was performed on a 9.4 T scanner to obtain the neurochemical profile in the cortex. At P4 and P25, histological analysis and protein expression were assessed in the cortex and hippocampus. Brain volumes and ex vivo microstructural analysis using DTI/NODDI parameters were performed at P25. Acute metabolic disturbance induced in cortical tissue by HIP3 was reversed with all three doses of Lf. However, data obtained from MRS show that Lf neuroprotective effects were modulated by the dose. Through western blotting analysis, we observed that HI pups supplemented with Lf at 0.1 and 1 g/kg were able to counteract glutamatergic excitotoxicity and prevent metabolic failure. When 10 g/kg was administered, we observed reduced brain volumes, increased astrogliosis, and hypomyelination, pointing to detrimental effects of high Lf dose. In conclusion, Lf supplementation attenuates, in a dose-dependent manner, the acute and long-term cerebral injury caused by HI. Lf reached its optimal effects at a dose of 1 g/kg, which pinpoints the need to better understand effects of Lf, the pathways involved and possible harmful effects. These new data reinforce our knowledge regarding neuroprotection in developmental brain injury using Lf through lactation and provide new insights into lactoferrin’s neuroprotection capacities and limitation for immature brains. View Full-Text
Keywords: prematurity; lactoferrin; hypoxia–ischemia; neuroprotection prematurity; lactoferrin; hypoxia–ischemia; neuroprotection
►▼ Show Figures 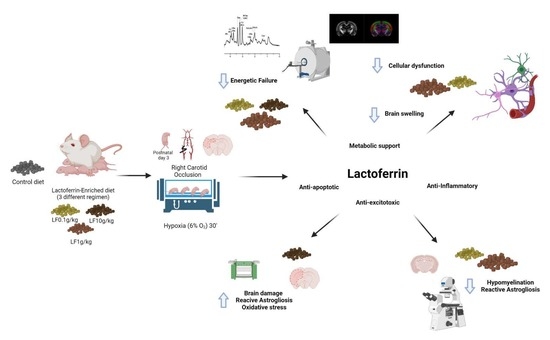