Understanding the Mechanisms of Diet and Outcomes in Colon, Prostate, and Breast Cancer; Malignant Gliomas; and Cancer Patients on Immunotherapy
Next Article in Special Issue

The Effect of Caffeine on the Risk and Progression of Parkinson’s Disease: A Meta-Analysis

Participants were recruited from the Korea Association Resource (KARE) study, which is part of the Korean Genome and Epidemiology Study (KoGES), a community-based cohort study. A total of 5012 and 5018 participants aged 40–69 years were enrolled from Ansan and Ansung, respectively, between 2001 and 2002. Socio-demographic status, anthropometric indices, dietary lifestyle, physical activity, and disease history were examined at baseline and follow-up phase every 2 years. In this study, we included data from baseline to the 6th follow-up (2001–2014). The details of the KoGES project have been described elsewhere [22].
Among the 10,030 participants of this study, DNA samples from a total of 8840 participants were genotyped at baseline. We excluded participants who did not have genetic information (n = 1190); those who were diagnosed with a type 2 diabetes by physicians or had been treated with oral hypoglycemic medication or insulin therapy at baseline (n = 619); those who had a history of cardiovascular disease including myocardial infarction and stroke (n = 150) or cancer (n = 20) at baseline; and those who did not provide daily coffee consumption frequency (n = 129) or amount (n = 54). In summary, 7868 participants (3685 men and 4183 women) were included in the GWAS (Table S1).
When we examined the association between habitual coffee consumption and the incident risk of prediabetes and type 2 diabetes combined, we further excluded participants who had prevalent type 2 diabetes (n = 666) or prediabetes (n = 2099) determined by the fasting plasma glucose (FPG) test, a 2-h oral glucose tolerance test (OGTT) and a hemoglobin A1c (HbA1c) test at baseline. We also excluded those who attended neither fifth nor sixth follow-up examination (n = 1049). As a result, a total of 4054 participants (1904 men and 2150 women) were included in the association analysis. This study was approved by the Institutional Review Board of Seoul National University (IRB No. E1911/003-011).

A 103-item semi-quantitative food frequency questionnaire (FFQ) for the KoGES was used to assess the habitual coffee consumption at baseline. The validity of the FFQ was evaluated by 3-day diet records [23,24]. Participants were asked to answer the frequency of coffee consumption over the last year (almost none, 1 time/month, 2–3 times/month, 1–2 times/week, 3–4 times/week, 5–6 times/week, 1 time/day, 2 times/day or 3 times/day) as well as the amount of coffee (0.5, 1 or 2 cups per time). The amount of sugar added in coffee was also investigated (1, 2 or 3 teaspoons per time). We multiplied the frequency and the amount of the daily consumption of coffee to obtain the number of cups consumed per day. Coffee consumption was categorized into non-coffee consumers, <1 cup/day, 1 to <2 cups/day and ≥2 cups/day. Among coffee consumers, participants who consumed coffee without sugar were defined as black-coffee consumers and those who consumed coffee with sugar as sugared-coffee consumers.
We calculated the amount of caffeine consumption of each participant by using the caffeine database published by the Korea Ministry of Food and Drug Safety (MFDS) [25] or the United States Department of Agriculture (USDA) [26] or by contacting the product companies. The foods considered to contain caffeine were as follows: beverages (coffee, tea and soft drinks) and foods made with cocoa (chocolate, chocolate candies, chocolate ice cream, chocolate milk, chocolate pies, and chocolate cakes).

Participants underwent a 2-h 75 g OGTT and HbA1c test at baseline and each follow-up. The concentrations of FPG and 2-h plasma glucose were measured by the hexokinase method (ADVIA 1650; Bayer, Berkley, MI, USA). Incident cases of prediabetes and type 2 diabetes were defined according to the American Diabetes Association (ADA) criteria [27]. Incident type 2 diabetes was ascertained if a participant had one of the following during the follow-up examination: had been diagnosed with a type 2 diabetes by physicians or had been treated with oral hypoglycemic medication or insulin therapy; had an FPG ≥ 126 mg/dL (≥7.0 mmol/L); had a 2-h plasma glucose ≥ 200 mg/dL (≥11.1 mmol/L); or had a HbA1c ≥ 6.5%. Prediabetes incidence was defined as an FPG ≥ 100 mg/dL (≥5.6 mmol/L) or 2-h plasma glucose ≥ 140 mg/dL (≥7.8 mmol/L) or HbA1c ≥ 6.0%.

We identified SNPs related to habitual coffee consumption in the GWAS. Participants were grouped into non-coffee consumers and coffee consumers, and this group information was used as a binary outcome variable in a logistic regression model for each SNP. We adjusted for age (years, continuous), sex, and alcohol consumption (g/day, continuous) in the GWAS. We also adjusted for baseline BMI in the secondary GWAS. In addition, we replicated a GWAS using a continuous variable of coffee consumption. A GWAS on continuous caffeine intake was also conducted. A box-cox transformed coffee or caffeine intake and a linear regression model were used for continuous analysis. A Manhattan plot and quantile-quantile (Q-Q) plot were generated, and the inflation factor (λ) was calculated. The GWAS was performed using PLINK version 1.07, and SNPs with a p-value < 1 × 10−5 were considered suggestive significant. A regional association plot of the significant SNPs was generated using the LocusZoom program (http://locuszoom.org). The linkage disequilibrium (LD) between the significant SNPs was examined using the HaploView program [30].

To calculate the genetic risk scores, each coffee-related SNP identified from the GWAS was assigned 0, 1, or 2 according to the number of minor alleles and then weighted by its relative effective size (β coefficient obtained from the GWAS). The genetic risk scores were calculated as following the equation: 5 × (β1 × SNP1 + β2 × SNP2 + β3 × SNP3 + β4 × SNP4 + β5 × SNP5)/(β1 + β2 + β3 + β4 + β5) [31]. The genetic risk scores ranged from 0 to 10 points, and the median value was 5 points among those with at least one minor allele. Participants were categorized into 3 groups: 0 point, 0.1 to <5 points, and 5 to 10 points. We examined the association between coffee consumption and the risk of prediabetes and type 2 diabetes combined in black coffee and sugared coffee. Non-coffee consumers and sugared-coffee consumers combined were regarded as reference group for black-coffee consumers. For sugared-coffee consumers, non-coffee consumers and black-coffee consumers combined were regarded as a reference group. Odds ratios (ORs) and 95% confidence intervals (CIs) for the association between coffee consumption and the risk of prediabetes and type 2 diabetes combined were calculated using multivariate logistic regression models among men and women combined or separately. The median cups of coffee consumed per day were assigned to each coffee group and used to test the linear trends. We also examined whether the association varied by genetic risk scores. The interaction analysis was performed by comparing the models with or without interaction term using a likelihood ratio test. All of the analyses were adjusted for age (years, continuous), sex (for men and women combined), body mass index (BMI, <23, 23 to <25, 25 to <30 and ≥30 kg/m2), smoking status (never smokers, ≤10 and >10 pack-years for black-coffee consumers; never smokers, ≤10, 10.1 to ≤20, 20.1 to ≤30 and >30 pack-years for sugared-coffee consumers), alcohol consumption (non-drinkers, ≤5, 5.1 to ≤10 and >10 g/day for black-coffee consumers; non-drinkers, ≤5, 5.1 to ≤10, 10.1 to ≤20 and >20 g/day for sugared-coffee consumers), family history of type 2 diabetes (yes or no), and total energy intake (kcal/day, continuous). Additionally, we also adjusted for the amount of sugar added in coffee when analyzing the association between black coffee consumption and the risk of prediabetes and type 2 diabetes combined (0, ≤5, 5.1 to ≤10, 10.1 to ≤15 and >15 g/day). SAS version 9.4 (SAS Institute, Cary, NC, USA) was used for all analyses, and p-value < 0.05 in two-sided tests was defined as a significant difference.

Of the 4054 participants in the association analysis, a total of 480 (11.8%) and 2468 (60.9%) participants developed type 2 diabetes and prediabetes during the 12-year follow-up period, respectively. Table 1 shows the baseline characteristics of the study population according to habitual coffee consumption. Compared with non-coffee consumers, participants who consumed either black coffee or sugared coffee were more likely to be younger, smoke, drink alcohol, and have a higher BMI.

In the GWAS of habitual coffee consumption, a total of 18 SNPs located in 12q24 achieved a suggestive significance (p < 1 × 10−5) (Table S2). When we additionally adjusted for baseline BMI, the same 18 significant SNPs were identified as well (Table S3). SNPs identified based on habitual coffee consumption were the same when we additionally conducted a GWAS for continuous caffeine intake.
Figure 1 and Figure 2 show the Manhattan plot and regional association plot, respectively. Figure 3 shows the Q-Q plot, and the genomic inflation factor (λ) of the GWAS was 1.0103, suggesting that the study population structure was well-adjusted [32]. Among the SNPs achieved suggestive significance at p < 1 × 10−5, we selected SNPs as follows, which were used later for calculating the genetic risk scores. First, pairwise correlations were examined and high correlation was declared when r2 > 0.8 (Figure 4). Then, we excluded all imputed SNPs having a high correlation with any genotyped SNP, and selected the SNPs among highly-correlated genotyped SNPs. As a result, three genotyped SNPs (rs2074356, rs11066015, and rs12229654) and two imputed SNPs (rs11065828 and rs79105258) were considered as coffee-related SNPs and used for calculating the genetic risk scores. Table 2 presents the information on these five SNPs related to coffee consumption. The SNPs were located in genes HECTD4, ACAD10, MYL2, and CUX2, and the minor allele frequency ranged from 0.143 to 0.172 in our population.

3.3. Coffee Consumption and the Risk of Prediabetes and Type 2 Diabetes Combined

In our study, we conducted a GWAS and discovered five SNPs (rs2074356 in HECTD4, rs11066015 in ACAD10, rs12229654 in MYL2, rs11065828 and rs79105258 in CUX2) associated with habitual coffee consumption in a Korean population. We observed that moderate black coffee and sugared coffee consumption reduced the risk of prediabetes and type 2 diabetes combined. We found that an inverse association was stronger among black-coffee consumers with minor alleles of five SNPs related to coffee consumption compared to those with major alleles. Further Asian GWASs and epidemiological studies are needed to elucidate the effects of coffee-related genetic variation and high coffee consumption on chronic disease risk.

This study was conducted with bioresources from National Biobank of Korea, the Center for Disease Control and Prevention, Republic of Korea (KBN-2018-044). 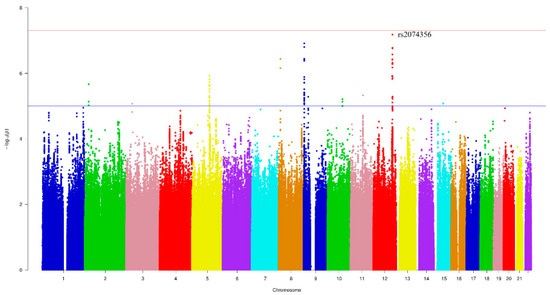 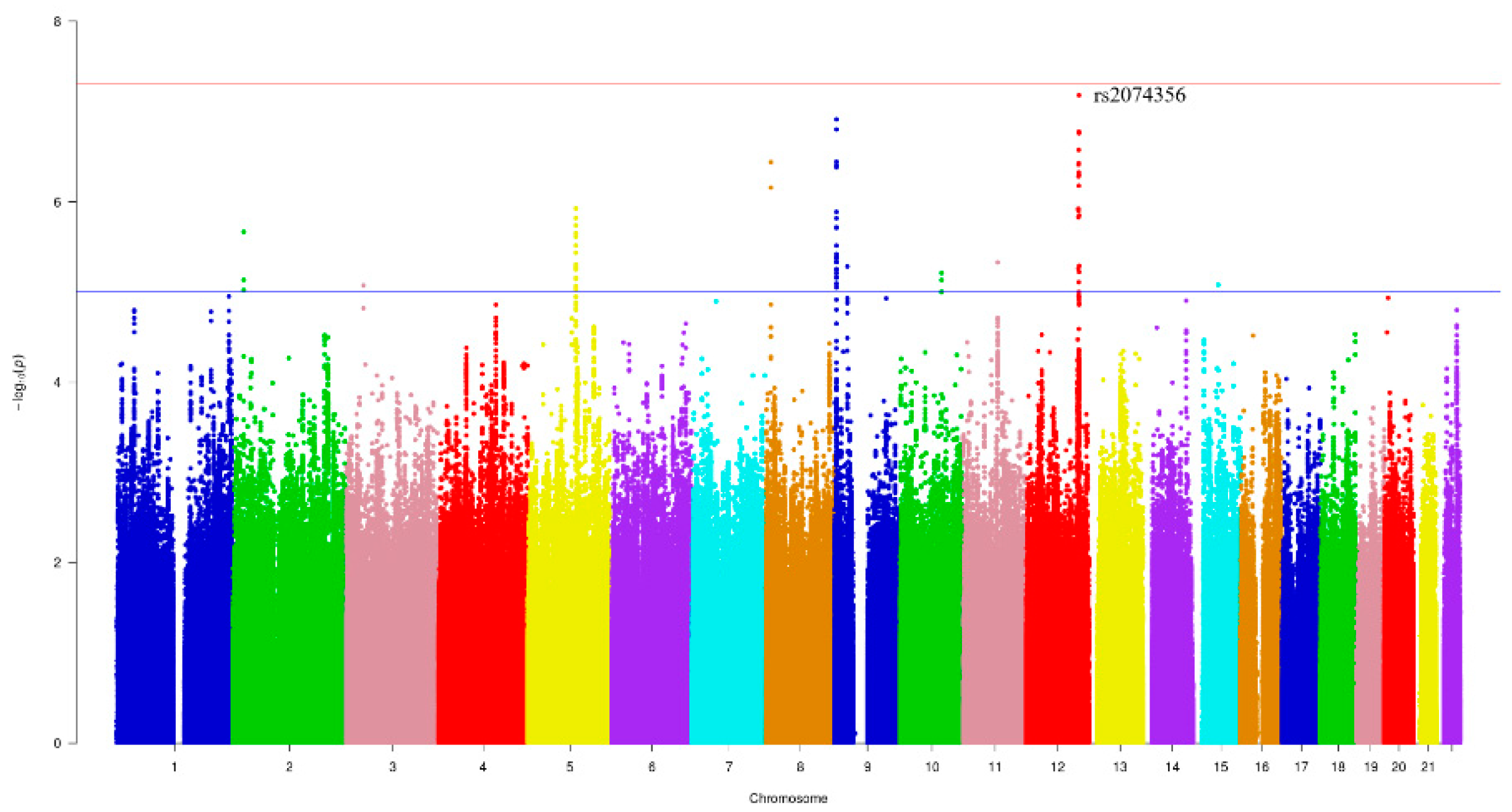 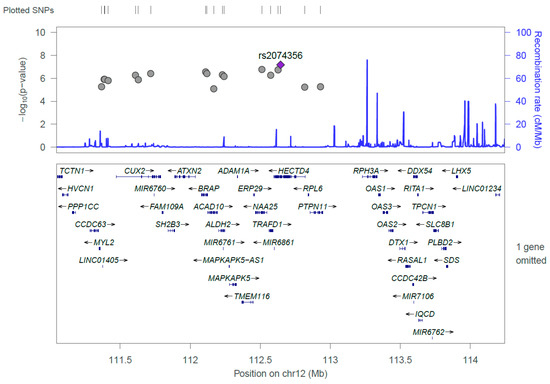 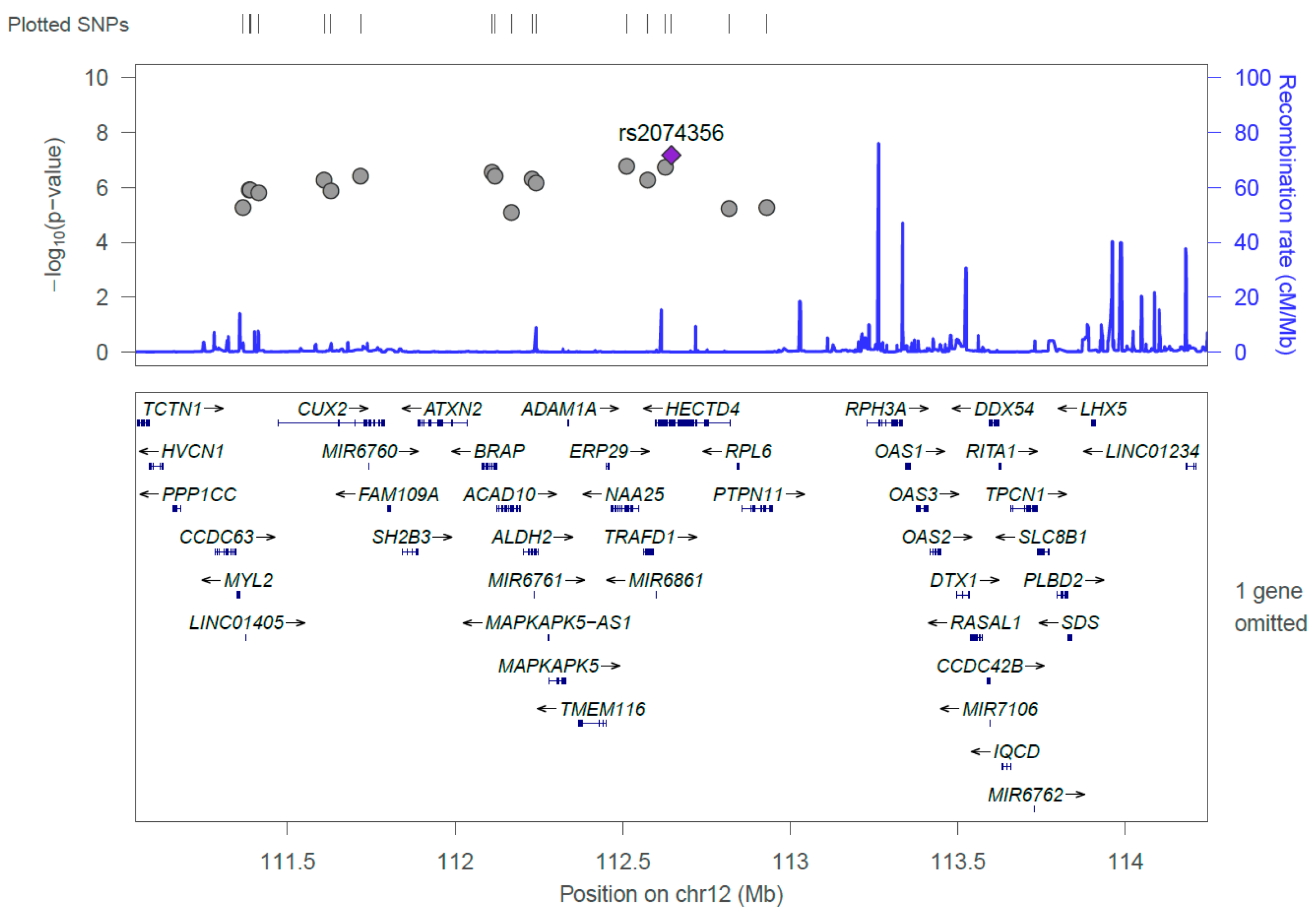 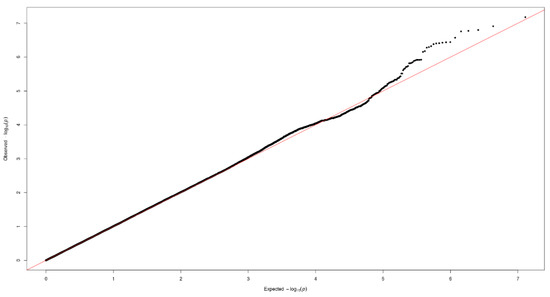 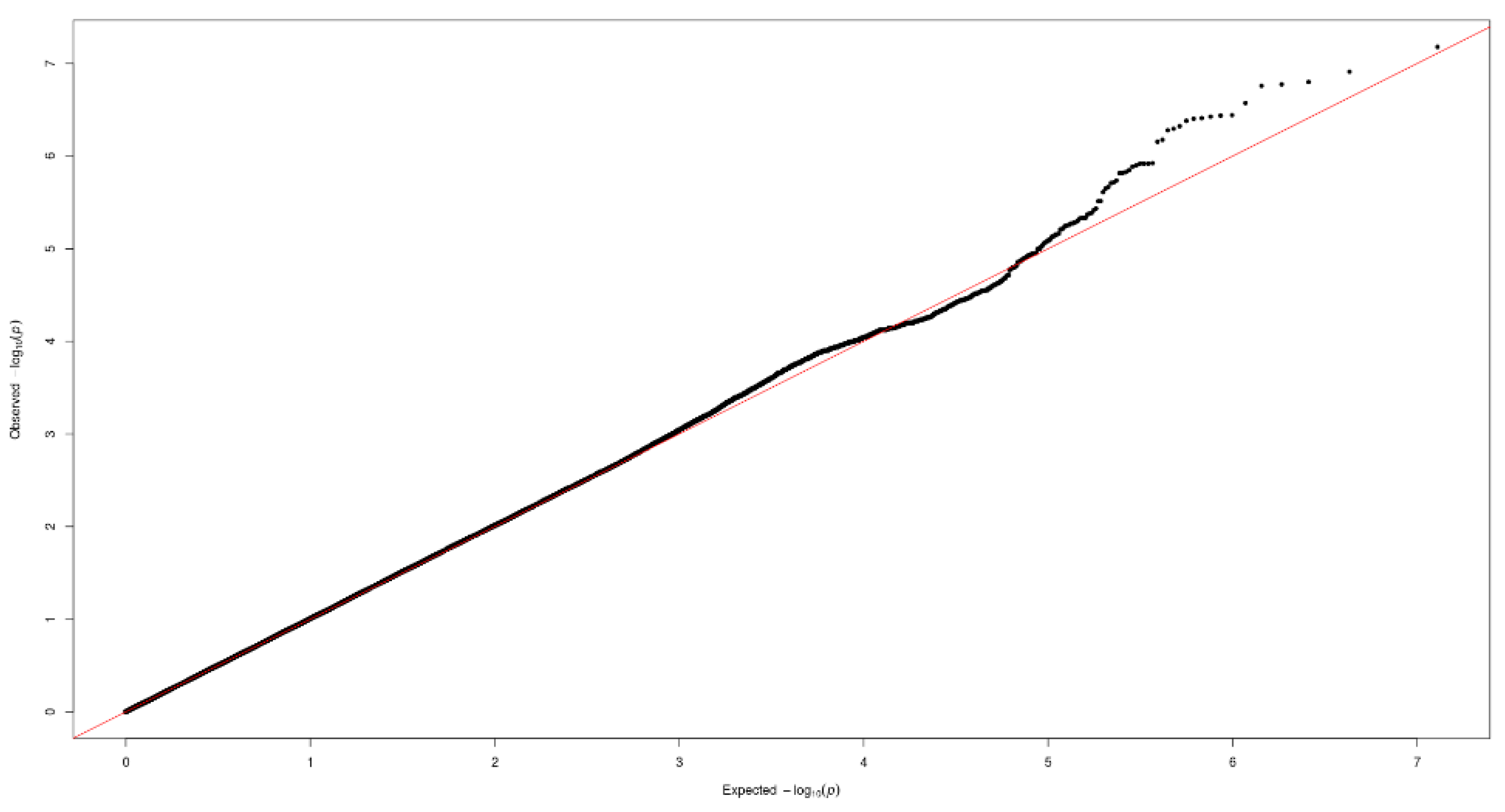