The Role of Iron in Brain Development: A Systematic Review
Next Article in Special Issue

The purpose of the randomized double-blind placebo-controlled trial was to assess the effectiveness of synbiotic preparation containing probiotic Lactobacillus rhamnosus FloraActive™ 19070-2, Lactobacillus acidophilus DSMZ 32418, Bifidobacterium lactis DSMZ 32269, Bifidobacterium longum DSMZ 32946, Bifidobacterium bifidum DSMZ 32403 and fructooligosaccharides in adult patients with diarrhea-dominant IBS (IBS-D). The study included eighty patients with moderate and severe IBS-D who were randomized to receive synbiotics or placebo for eight weeks. Finally, a total of sixty-eight patients finished the study. The primary endpoints included the assessment of the symptoms’ severity with IBS symptom severity scale (IBS-SSS), an improvement of IBS global symptoms with Global Improvement Scale (IBS-GIS) and adequate relief of symptoms after four and eight weeks of therapy. Secondary endpoints, which were collected by telephone interviewers three times a week included the assessment of individual IBS symptoms and adverse events. Synbiotic treatment in comparison to placebo significantly improved IBS-GIS (p = 0.043), and IBS-SSS score inducing a decrease in the total IBS-SSS (p = 0.042) and in domain-specific scores related to flatulence (p = 0.028) and bowel habit (p = 0.028) after four and eight weeks. Patients treated with synbiotics reported in weekly observations a significant amelioration in a feeling of incomplete bowel movements, flatulence, pain, stool pressure and diarrheal stools compared to those receiving placebo. There were no differences in adverse events between both groups. Concluding, the multi-strain synbiotic preparation was associated with a significant improvement in symptoms in IBS-D patients and was well-tolerated. These results suggest that the use of synbiotics offers a benefit for IBS-D patients. [Clinicaltrials.gov NCT04206410 registered 20 December 2019]. View Full-Text
Keywords: irritable bowel syndrome; synbiotics; probiotics; prebiotics; short chain fructooligosaccharides; Lactobacillus; Bifidobacterium irritable bowel syndrome; synbiotics; probiotics; prebiotics; short chain fructooligosaccharides; Lactobacillus; Bifidobacterium
►▼ Show Figures 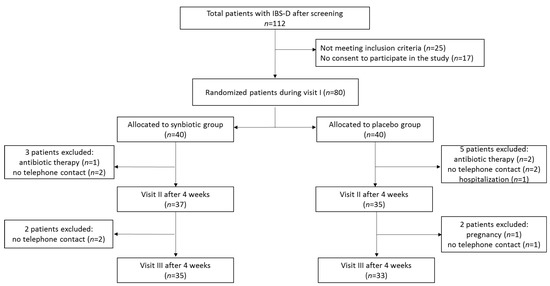