The Nutritional Quality of Organic and Conventional Food Products Sold in Italy: Results from the Food Labelling of Italian Products (FLIP) Study
Previous Article in Journal

To reduce the sugar content of processed foods through reformulation, the first step is to determine the content of the largest sources of sugars in each country’s diet. The aim of this work was to describe the sugar content in the most commonly consumed processed foods in Spain and to compare that sugar’s labelling and laboratory analysis values (LVs and AVs, respectively) to confirm its adequacy. A sample of the 1173 most commonly consumed processed foods in Spain (28 groups; 77 subcategories) was collected. For each product, the total sugar content was compared according to its AV and LV. The median (25th –75th percentiles, interquartile range) sugar content by group was calculated for the total sample, and the groups were classified as “high sugar content” when this value was above 22.5 g/100g of product. The adequacy of the LV, according to the European Union (EU) tolerance requirements, was then evaluated, and each subcategory median was compared with the AV to determine its appropriateness via a median test for independent samples (p < 0.05). In total, 10 out of 28 groups presented high sugar content. Moreover, 98.4% of the products met the EU tolerance ranges. Finally, only one subcategory (“cured ham”) presented significant differences between the AV and LV median values (0.4 g vs. 0.1 g sugar/100g, p < 0.05). The groups of food products whose sugar content reduction could have the greatest impact on public health were identified. In addition, our study showed the high adequacy of LV with the EU labeling tolerance requirements, as well as the LV’s appropriateness as a tool to implement actions aimed at reducing sugar consumption. View Full-Text
Keywords: nutrition labeling; food labeling; food processing; nutrition policy; Spain; food analysis; dietary sugars; reformulation nutrition labeling; food labeling; food processing; nutrition policy; Spain; food analysis; dietary sugars; reformulation
►▼ Show Figures 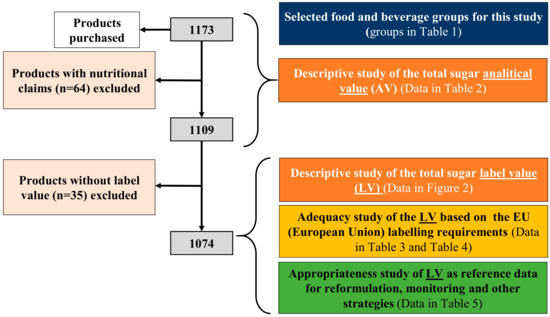