The Impact of Coconut Oil and Epigallocatechin Gallate on the Levels of IL-6, Anxiety and Disability in Multiple Sclerosis Patients
Previous Article in Journal

Abnormally high levels of physical activity have been documented throughout the literature in patients with eating disorders (ED), especially those diagnosed with anorexia nervosa (AN). Yet no clear definition, conceptualization, or treatment of the problematic use of physical activity (PPA) in ED patients exists. The aim of this review is to propose a new classification of PPA, report the prevalence, triggers, predictors, maintainers and other related factors of PPA in ED patients, in addition to proposing a comprehensive model of the development of PPA in AN. A total of 47 articles, retrieved from Medline and Web of Science, met the inclusion criteria and were included in the analysis. As a result, the new approach of PPA was divided into two groups (group 1 and group 2) according to the dimension (quantitative vs qualitative approach) of physical activity that was evaluated. The prevalence of PPA in ED was reported in 20 out of 47 studies, the comparison of PPA between ED versus controls in 21 articles, and the links between PPA and psychological factors in ED in 26 articles, including depression (16/26), anxiety (13/26), obsessive–compulsiveness (9/26), self-esteem (4/26), addictiveness (1/26), regulation and verbal expression of emotions (1/26) and anhedonia (1/26). The links between PPA and ED symptomatology, PPA and weight, body mass index (BMI) and body composition in ED, PPA and age, onset, illness duration and lifetime activity status in ED, PPA and ED treatment outcome were reported in 18, 15, 7, 5 articles, respectively. All of the factors have been systematically clustered into group 1 and group 2. Results focused more on AN rather than BN due to the limited studies on the latter. Additionally, a model for the development of PPA in AN patients was proposed, encompassing five periods evolving into three clinical stages. Thus, two very opposite components of PPA in AN were suggested: voluntarily PPA increased in AN was viewed as a conscious strategy to maximize weight loss, while involuntarily PPA increased proportionally with weight-loss, indicating that exercise might be under the control of a subconscious biological drive and involuntary cognition. View Full-Text
Keywords: review; eating disorders; physical activity; problematic use of physical activity review; eating disorders; physical activity; problematic use of physical activity
►▼ Show Figures 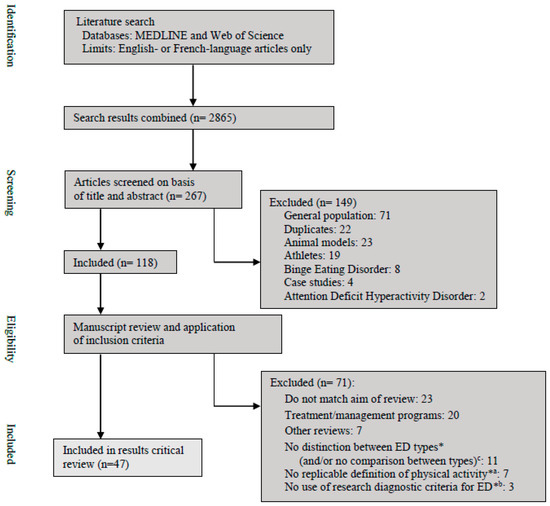