Obesity is a worldwide prevalent metabolic disorder that is associated with diabetes, among many other diseases. Bearing this in mind, prevention and treatment ways need to be improved. Notably, activity of the enzyme semicarbazide-sensitive amine oxidase (SSAO) is found to be elevated in overweight subjects. Moreover, SSAO inhibition has resulted in an increase of histamine activity in adipose tissue and the limitation of body fat. The current review aims to overview the risks of obesity, rationalize the molecular ways of SSAO activity, and outline the strategies of inhibiting upregulated enzyme levels. It describes the differences between SSAO inhibitors and advances the prospective agents. Based on evidence, caffeine is proposed as an effective, safe, and reliable choice to inhibit SSAO activity. Furthermore, the histamine in adipocytes has been associated with SSAO activity. Therefore, it is suggested as one of the key compounds to be studied for obesity management. To conclude, inhibiting SSAO may attenuate weight gain and prevent related diseases. View Full-Text
Keywords: obesity; semicarbazide-sensitive amine oxidase (SSAO); caffeine; histamine; diabetes obesity; semicarbazide-sensitive amine oxidase (SSAO); caffeine; histamine; diabetes
►▼ Show Figures 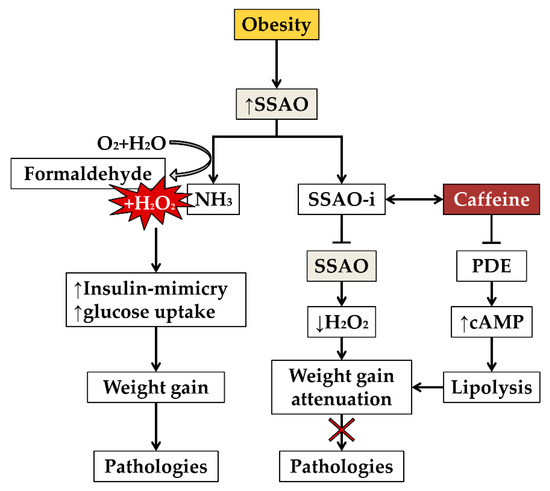