Differences in Dietary Intakes among Lebanese Adults over a Decade: Results from Two National Surveys 1997–2008/2009
Previous Article in Journal

The Consumption of Nuts is Associated with Better Dietary and Lifestyle Patterns in Polish Adults: Results of WOBASZ and WOBASZ II Surveys

The Mexican National Health and Nutrition Survey as a Basis for Public Policy Planning: Overweight and Obesity

Mexico has one of the highest overweight and obesity rates in the world. Our objective is to describe the tendency of overweight and obesity by sex, health service affiliation, and socioeconomic tertile (T1,2,3), and to give examples of public policies derived from the results of the Mexican National Health and Nutrition Surveys (ENSANUT). Data come from the 2006, 2012, and 2016 ENSANUTs, which are probabilistic surveys that allow us to make inferences at the national level, on urban and rural strata and regions; their coverage includes all the population age groups. We assessed overweight and obesity (OW + O) in all population groups. The prevalence of OW + O in preschool children was lower in T1 in all the surveys, and shows an increase by year of survey, according to the health service affiliation. In school-age women, prevalence increased over the 10 years of evaluation, in spite of the high prevalence in both genders in T3. Adolescent behavior is similar and, in adults, the prevalence of OW + O shows an increase by year of survey, gender, and affiliation, with the differences not explained by socioeconomic tertile. In conclusion, the ENSANUT series represents a surveillance system that allow us to observe the changes in overweight and obesity prevalence over the time, showing a high prevalence of OW + O in the population, and has contributed to public policy enhancement. View Full-Text
Keywords: National Health and Nutrition Surveys; public policies; overweight; obesity National Health and Nutrition Surveys; public policies; overweight; obesity
►▼ Show Figures 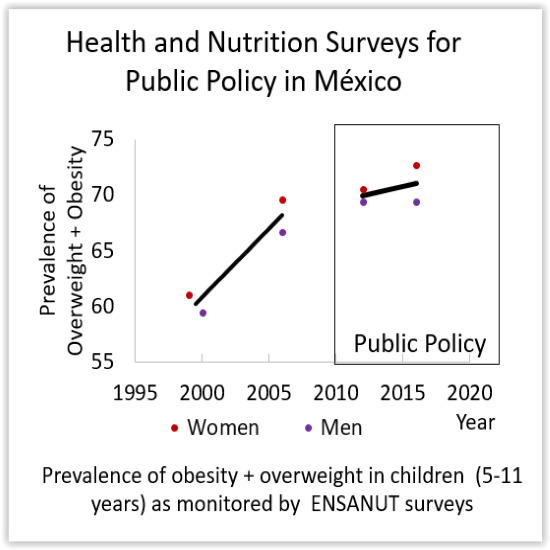