Anaemia and Its Relation to Demographic, Socio-economic and Anthropometric Factors in Rural Primary School Children in Hai Phong City, Vietnam
Next Article in Special Issue

The Effects of a Low GI Diet on Cardiometabolic and Inflammatory Parameters in Patients with Type 2 and Gestational Diabetes: A Systematic Review and Meta-Analysis of Randomised Controlled Trials
Previous Article in Journal

Effect of Oral Nutritional Supplements with Sucromalt and Isomaltulose versus Standard Formula on Glycaemic Index, Entero-Insular Axis Peptides and Subjective Appetite in Patients with Type 2 Diabetes: A Randomised Cross-Over Study

Oral diabetes-specific nutritional supplements (ONS-D) induce favourable postprandial responses in subjects with type 2 diabetes (DM2), but they have not been correlated yet with incretin release and subjective appetite (SA). This randomised, double-blind, cross-over study compared postprandial effects of ONS-D with isomaltulose and sucromalt versus standard formula (ET) on glycaemic index (GI), insulin, glucose-dependent insulinotropic polypeptide (GIP), glucagon-like peptide 1 (GLP-1) and SA in 16 individuals with DM2. After overnight fasting, subjects consumed a portion of supplements containing 25 g of carbohydrates or reference food. Blood samples were collected at baseline and at 30, 60, 90, 120, 150 and 180 min; and SA sensations were assessed by a visual analogue scale on separate days. Glycaemic index values were low for ONS-D and intermediate for ET (p < 0.001). The insulin area under the curve (AUC0–180 min) (p < 0.02) and GIP AUC (p < 0.02) were lower after ONS-D and higher GLP-1 AUC when compared with ET (p < 0.05). Subjective appetite AUC was greater after ET than ONS-D (p < 0.05). Interactions between hormones, hunger, fullness and GI were found, but not within the ratings of SA; isomaltulose and sucromalt may have influenced these factors. View Full-Text
Keywords: glycaemic index; incretins; subjective appetite; isomaltulose; sucromalt; nutritional supplement glycaemic index; incretins; subjective appetite; isomaltulose; sucromalt; nutritional supplement
►▼ Show Figures 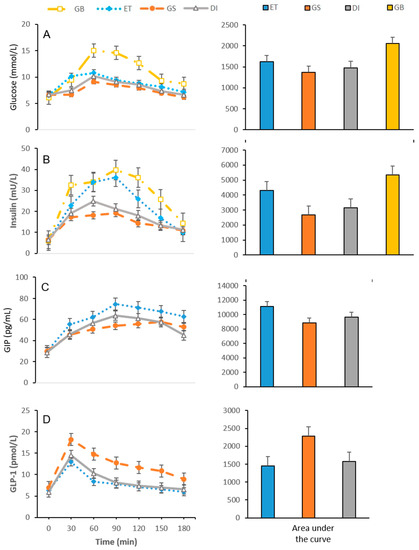