Health Benefits of Resveratrol in Kidney Disease: Evidence from In Vitro and In Vivo Studies
Previous Article in Journal

The increased prevalence of obesity is a very serious public health problem [1]. Obesity is closely related to the incidence of metabolic syndrome, which includes disorders such as cardiovascular disease, diabetes, hypertension, and hyperlipidemia, and contributes to a lower quality of life and increased mortality [2,3]. Various therapeutic agents for obesity have been developed to improve the condition by controlling appetite, fat absorption, lipid oxidation, the differentiation and proliferation of preadipocytes, lipogenesis, lipolysis, and pro-inflammatory cytokines secretion [4,5,6,7,8]. However, these anti-obesity drugs mostly have side effects or rebound weight gain when the medication is ceased [9,10]. Therefore, there is a great demand for the development of a therapeutic agent for obesity that is effective but has no side effects.
Polyphenol is a common component in vegetables and fruits, and its variety and abundance are very diverse. Polyphenols exhibit various physiological effects, including antioxidant activity. Since oxidative stress is associated with various diseases, such as insulin resistance, diabetes, cardiovascular disease, and some cancers, plants containing polyphenols are seen as a therapeutic alternative for major diseases in modern people [11,12]. Studies have reported that obesity can be caused by increased oxidative stress and subsequent chronic low-grade inflammatory reactions, and that polyphenol-rich plants can prevent its metabolic complications as well as prevent and treat obesity [13,14,15].
Aronia melanocarpa, or chokeberry, is a traditional medicinal herb indigenous to eastern North America and eastern Canada. It is effective for colds and has been used as a hypertension and an arteriosclerosis remedy in Europe and Russia. In Japan, these red-purple fruits have been made into juice, wine, and jam [16]. Aronia melanocarpa has various physiological activities, including anti-inflammatory [17], gastroprotective [18], hepatoprotective [19], antidiabetic [20,21], hypolipidemic [22,23], and cardiovascular-protective [24,25] properties. These health improvement effects of Aronia melanocarpa are due to the high polyphenol content, which has a high antioxidant effect [16]. The total polyphenols in Aronia melanocarpa have been reported to range from 690 to 2560 mg gallic acid equivalent (GAE) per 100 g fresh weight, depending on the extraction conditions as well as cultivation, hydration, and storage conditions of the pulp. Among the anthocyanins of Aronia melanocarpa fruit, cyanidin-3- O -galactoside is present in the highest amount [16].
By changing the extraction conditions of Aronia melanocarpa, we developed an Aronia melanocarpa extract with a much higher content of cyanidin-3-O-galactoside than that produced by conventional methods. In vitro studies with 3T3-L1 adipocytes have shown that cyanidin-3-O-galactoside-enriched Aronia melanocarpa extract (AM-Ex) inhibited adipogenesis by down-regulation of adipogenic transcription factors and their target genes [26]. The current study was conducted to confirm the efficacy of AM-Ex in an in vivo system. C57BL/6N mice were used as experimental animals, and dietary obesity was induced by feeding a high fat diet. The effects of AM-Ex in varying concentrations on weight, fat mass, insulin resistance, adipocytokines, blood lipid profiles, and adipogenic transcription factors and their related genes were examined.

AM-Ex was prepared by Wellfine Co., Ltd (Hoengseong, Gangwon, Korea). according to the method described previously [26]. In brief, the freeze-dried powder of Aronia melanocarpa Nero fruits was extracted with 70% ethanol by adding 100 g of the dried powder to 2 L of 70% ethanol using a high pressure homogenizer (Micronox, Seongnam, Korea) at room temperature. The intermediate extract was additionally extracted under reduced pressure condition using a rotary evaporator in 40 megapascal (Mpa) pressure at 30 °C for 2 h. The extract was concentrated with a rotary evaporator and lyophilized for 72 h in a lyophilizer (IlshinBioBase, Dongducheon, Korea). The resulting powder was used as AM-Ex and stored at −20 °C until further use. The cyanidine-3-O-galactoside content of AM-Ex was analyzed using an HPLC (Ultimate 3000, Thermo Fisher Scientific, Waltham, MA, USA). The content of cyanidin-3-O-galactoside was 2408 mg /100 g of AM-Ex.

All animal experiments were conducted according to the protocols approved by the Institutional Animal Care and Use Committee of Hallym University (approval number: Hallym 2017-65). Four-week-old male C57BL/6N mice were purchased from Dooyeol Biotech Co. Ltd. (Seoul, Korea) and housed in controlled standard conditions of 23 ± 3 °C temperature, 50 ± 10% relative humidity, and a 12 h light/dark cycle. The mice were acclimated for one week before use and provided free access to a standard non-purified rodent diet (Cargill Agri Purina, Inc., Seongnam, Korea) and water.
After one week of acclimation, the mice were randomly divided into five groups (10 mice per group): (1) control diet (CD), (2) high-fat diet (HFD), (3) HFD + 50 mg/kg body weight (BW)/day AM-Ex (AM-Ex 50), (4) HFD + 100 mg/kg BW/day AM-Ex (AM-Ex 100), and (5) HFD + 200 mg/kg BW/day AM-Ex (AM-Ex 200). The CD (containing 10 kcal% as fat, No. D12450B) and the HFD (containing 60 kcal% as fat, No. D12452) used in this study were purchased from Research Diets, Inc. (New Brunswick, NJ, USA). The mice were fed for eight weeks and allowed free access to food and water during the entire period. AM-Ex dissolved in physiological saline solution was administered daily by oral gavage for eight weeks. The mice in the CD and the HFD group were given an equal volume of saline solution by oral gavage. Body weights and food intake were measured once a week and daily, respectively, during the feeding period.
At the end of the experimental period, all mice were fasted for 16 h then anesthetized with tribromoethanol diluted with tertiary amyl alcohol. Whole body composition (BW and body fat mass percentage) was determined using dual-energy X-ray absorptiometry (DEXA, PIXImusTM, GE Lunar, Madison, WI, USA). Blood was collected from the orbital vein for serum biomarker analysis, after which the adipose tissues were excised, rinsed, and weighed.

The epididymal adipose tissues were fixed with 4% paraformaldehyde solution and treated according to a general tissue-processing procedure. The tissue samples were stained with hematoxylin and eosin (H&E) and examined under a light microscope. Photographs were obtained using an AxioImager microscope (Carl Zeiss, Jena, Germany). The size and the number of adipocytes were quantified using an AxioVision Imaging System (Carl Zeiss) with a magnifying power of 200×, and the slides were examined in a blinded manner.

Total RNA from the epididymal adipose tissue was extracted with Trizol (Invitrogen Life Technologies, Carlsbad, CA, USA) according to the manufacturer’s instruction. The content and the purity of the total RNA were estimated using a micro-volume spectrophotometer (BioSpec-nano, Shimadzu, Kyoto, Japan). Quantitative real-time reverse transcription-polymerase chain reaction (RT-PCR) was conducted using a Rotor-gene 3000 PCR (Corbett Research, Mortlake, Australia) and a Rotor-GeneTM SYBR Green kit (Qiagen, Valencia, CA, USA) according to the manufacturer’s instruction. The sequences of the primers used in this study are shown in Table 1. Polymerase chain reaction amplification of the complementary DNA (cDNA) was carried out at 94 °C for 3 min, followed by 40 cycles as follows: 95 °C for 10 s, 60 °C for 15 s, and 72 °C for 20 s. The results were analyzed with Rotor-Gene 6000 Series System Software program, version 6 (Corbett Research, Mortlake, Australia) and normalized to those of glyceraldehyde 3-phosphate dehydrogenase (GAPDH).

All results are presented as the mean ± standard error of the mean (SEM). Statistical analyses were performed using the Student’s t-test to test the differences between the CD group and the HFD group. An ANOVA test followed by Duncan’s multiple comparison test were performed to compare the means between the HFD, the AM-Ex 50, the AM-Ex 100, and the AM-Ex 200 groups. P < 0.05 was considered to be statistically significant.

3.5. AM-Ex Modulates the Expression of Adipogenic Transcription Factors and their Target Genes in the Epididymal Adipose Tissue

To gain insight into the molecular basis of the anti-obesity effect of AM-Ex, we examined the expression levels of adipogenic transcription factors, including CCAAT/enhancer binding protein α (C/EBPα), peroxisome proliferator-activated receptor γ (PPARγ), and sterol regulatory element-binding protein-1c (SREBP-1c) and their target genes, in epididymal adipose tissue. Compared to the CD group, the HFD group exhibited dramatically increased C/EBPα, PPARγ, and SREBP-1c messenger RNA (mRNA) expression (P < 0.001). AM-Ex treatment noticeably reduced the mRNA expression of C/EBPα, PPARγ, and SREBP-1c elevated by HFD treatment. In addition, the mRNA expression of peroxisome proliferator-activated receptor gamma coactivator-1α (PGC-1α), a transcriptional coactivator and a key regulator of energy metabolism, was up-regulated in the HFD group compared to the CD group, while it was down-regulated in the three AM-Ex-treated groups (Figure 4). For the genes involved in fatty acid biosynthesis, the mRNA expression of acetyl-CoA carboxylase 1 (ACC1), ATP-citrate lyase (ACL), fatty acid synthase (FAS), and adipocyte protein 2 (aP2) were higher in the HFD group than in the CD group, while they were significantly reduced in the AM-Ex 50, 100, and 200 groups compared to the HFD group. The mRNA expression of carnitine palmitoyltransferase 1 (CPT1), a gene involved in fatty acid oxidation, did not differ significantly between the CD group, the HFD group, and the three AM-Ex-treated groups. There was no obvious difference in mRNA expressions of hormone-sensitive lipase (HSL) and beta-3 adrenergic receptor (β3-AR), which is involved in lipolysis in adipose tissue, between the CD and the HFD groups. However, the mRNA expression of HSL was significantly increased by AM-Ex treatment. AM-Ex treatment increased β3-AR mRNA expression in comparison with the HDF group (6.38-fold, 8.02-fold, and 8.48-fold in the AM-Ex 50, AM-Ex 100, and AM-Ex 200 groups, respectively) (Figure 5).

To summarize the results of this study, we found that cyanidine-3-O-galactoside-enriched AM-Ex had an anti-obesity effect in C57BL/6 mice. AM-Ex supplementation reduced insulin resistance, serum triglyceride, LDL- and total cholesterol levels, white fat tissue weights, and leptin levels. These changes were related to adipogenesis-related transcription factors and coactivators and the down-regulation of specific adipogenesis-related genes affected by these transcription factors. These changes were also related to decreased food intake due to changes in leptin levels. Our results suggest that cyanidine-3-O-galactoside-enriched Aronia melanocarpa may be used as an anti-obesity agent. More research is needed to find effective and safe doses to apply these results to humans in the future.

This research was supported by the Ministry of Trade, Industry & Energy (MOTIE), Korea Institute for Advancement of Technology (KIAT) through the Encouragement Program for the Industries of Economic Cooperation Region (P0000824). 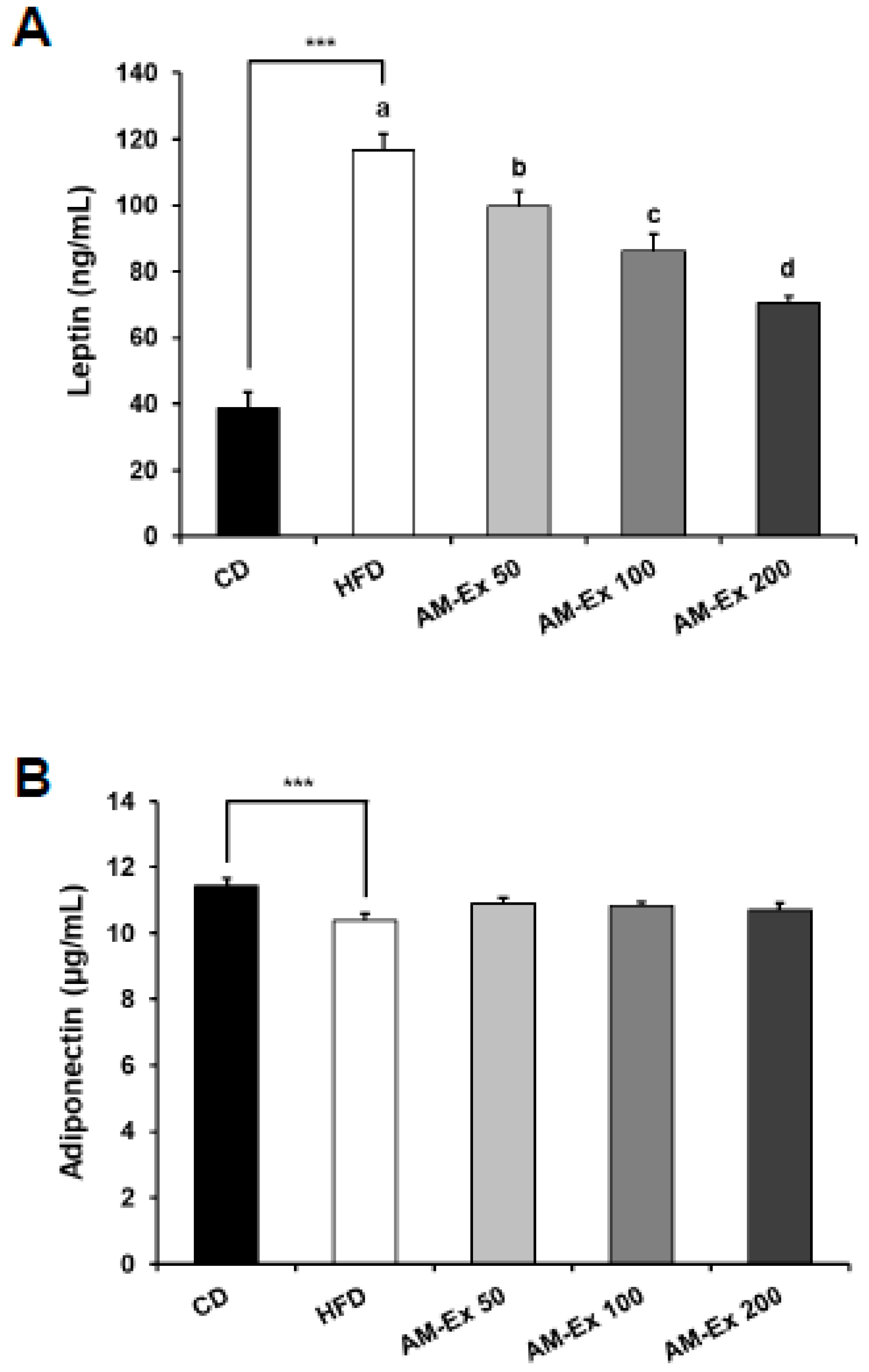 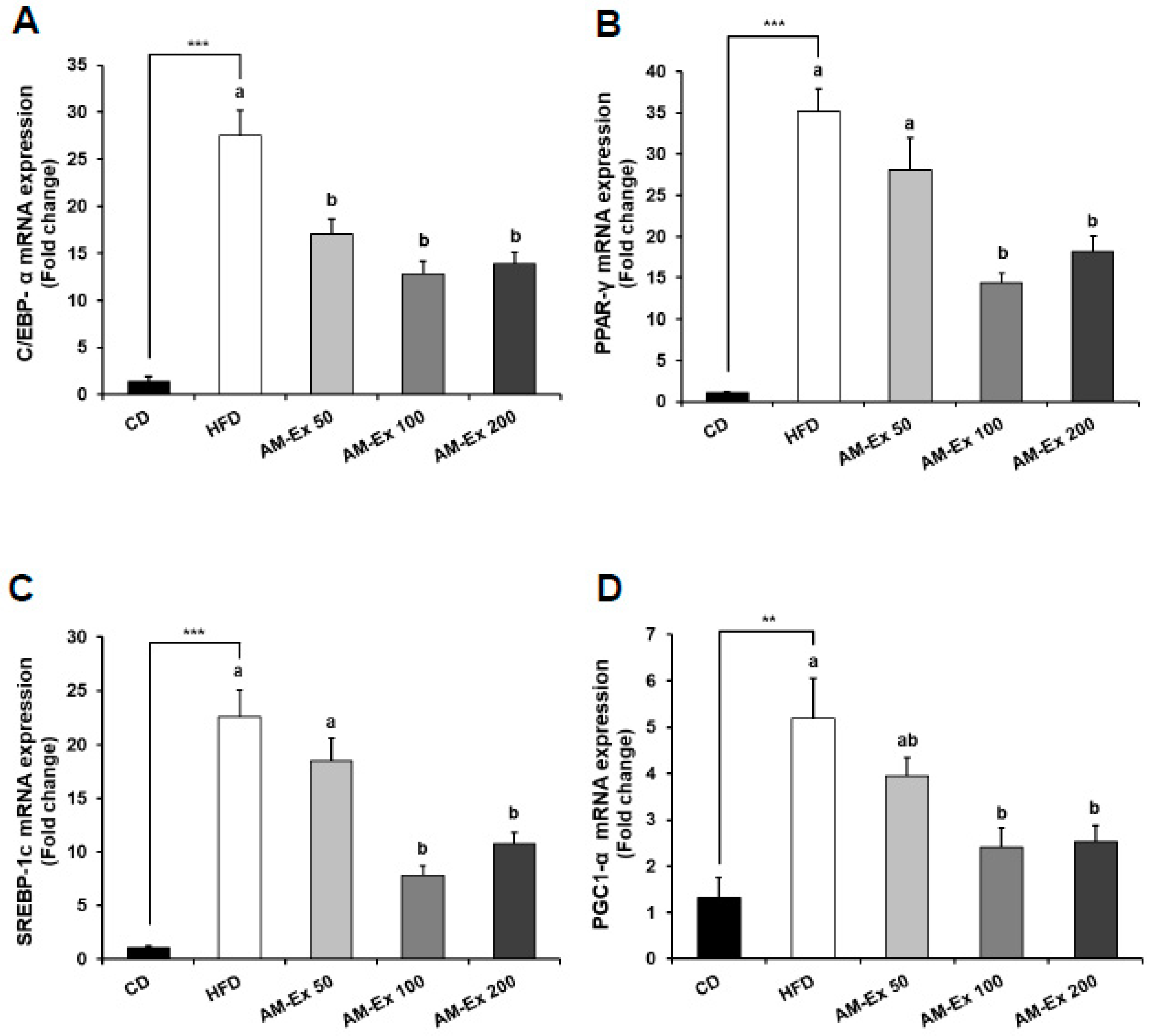