Can Nutritional Intervention for Obesity and Comorbidities Slow Down Age-Related Hearing Impairment?
Previous Article in Journal

The Good, the Bad, and the Ugly of Pregnancy Nutrients and Developmental Programming of Adult Disease
Previous Article in Special Issue

Because age-related hearing loss (ARHL) is irreversible, prevention is very important. Thus, investigating modifying factors that help prevent ARHL is critical for the elderly. Nutritional status or nutritional factors for the elderly are known to be associated with many problems related to aging. Emerging studies suggest that there was the interaction between nutrition and ARHL. We aimed to investigate the possible impact of dietary nutrients on ARHL using data from the fifth Korean National Health and Nutrition Examination Survey (KNHANES) which included 4742 subjects aged ≥ 65 years from 2010 to 2012. All participants underwent an otologic examination, audiologic evaluation, and nutritional survey. The associations between ARHL and nutrient intake were analyzed using simple and multiple regression models with complex sampling adjusted for confounding factors, such as BMI, smoking status, alcohol consumption, and history of hypertension and diabetes. Higher intake groups of riboflavin, niacin and retinol was inversely associated with ARHL prevalence (riboflavin aOR, 0.71; 95% CI, 0.54–0.94; p = 0.016, niacin aOR, 0.72; 95% CI, 0.54–0.96; p = 0.025, retinol aOR 0.66; 95% CI, 0.51–0.86; p = 0.002, respectively). Our findings suggest the recommended intake levels of riboflavin, niacin, and retinol may help reduce ARHL in the elderly.
Keywords: hearing loss; presbycusis; nutrients; riboflavin; niacin; retinol hearing loss; presbycusis; nutrients; riboflavin; niacin; retinol

Age-related hearing loss (ARHL) or presbycusis is a progressive, bilateral, symmetrical sensorineural hearing loss. ARHL is a result of degeneration of the cochlea or associated structures of the inner ear. Approximately ARHL affects 23% to 40% of the population older than 65 years of age [1].
Disabling hearing loss was defined as better ear hearing more than 40 dB (average of 0.5, 1, 2, and 4 kHz) in adults according to the World Health Organization (WHO) [2]. In 2012, the WHO estimated that there were 328 million adults with disabling hearing loss worldwide. Because of the aging population, the WHO suggested that more than 500 million will suffer from significant ARHL by 2025 [2]. ARHL is associated with increased cognitive dysfunction and dementia in the elderly [3,4,5], which can lead to social isolation, depression, and anxiety [6]. ARHL is irreversible; therefore, understanding potential modifying factors associated with ARHL is critical for prevention.
Nutritional status or nutritional factors for the elderly are known to cause many problems related to aging, and emerging studies have suggested that there are interaction effects between nutrition and ARHL [7,8]. Metabolic syndrome is affected by nutritional status or nutritional factors [9], and we recently identified an association between metabolic syndrome and ARHL in a 5-year follow-up and large cohort study [10].
To reduce the risk of ARHL, it is important to identify protective nutritional factors. The Korean National Health and Nutrition Examination Survey (KNHANES) may be useful for determining whether or not there are protective nutritional factors. This survey collects comprehensive information, such as health status and nutritional condition from the general Korean population, using a complex, stratified, multistage, probability-clustered sampling method based on national census data.
Two studies have investigated the relationship between nutrition and hearing loss using KNHANES data. One study reported a relationship between vitamins and ARHL, but there was a limitation of research to the population included for one year only in 2011, rather than the total of 3 years from 2010 to 2012 in the fifth KNHANES [11]. The other study analyzed energy-related nutritional factors such as proteins, fats and carbohydrates, and found that low fat and low protein intake were associated with ARHL using the fifth KNHANES data, but defined hearing loss as ≥ 25 dB, which does not cause a major disability, rather than the ≥40 dB criterion for disabling hearing loss established by the WHO [12].
In this study, we aimed to investigate the possible impact of dietary nutrients on ARHL using data from the fifth KNHANES, which includes cross-sectional surveys of subjects from 2010 through 2012. The population of overall disabling hearing loss included 10% of total participants, and up to 40% in the population older than 65 years [13]. Because we wanted to analyze the relationship between ARHL and nutrition in the age group in which ARHL was mainly observed, we focused on this study only over 65 years of age.

This study used data from the fifth KNHANES. The KNHANES is an ongoing nationwide epidemiological study conducted by the Korea Centers for Disease Control and Prevention of the Ministry of Health and Welfare. The institutional review board (IRB) of the Korean Centers for Disease Control and Prevention review and approve the KNHANES survey annually. All participants are randomly chosen from randomly assigned districts of cities and provinces in South Korea. Among the selected candidate population, 80.8% of individuals participated in the fifth KNHANES from 2010 to 2012. Written informed consent was obtained from all participants before commencement of the study.
During the period of the Fifth KNHANES, the total number of participants was 36,067 individuals. Among those 36,067 participants, 4742 subjects aged ≥ 65 years were included. Among the 4742 participants aged ≥ 65, 1022 participants were excluded because they had not received an audiometric test or had an abnormal tympanic membrane or had not completed the nutritional survey or had incomplete data (Figure 1).

During the fifth KNHANES survey, otologic examinations were conducted by ENT doctors by using a 4-mm, 0° endoscope (Xion GmbH, Berlin, Germany) to evaluate any abnormalities related to the tympanic membrane or middle ear including retraction, otitis media with effusion and cholesteatoma. Audiologic evaluation was performed by using a diagnostic audiometer (SA-203; Entomed, Malmoe, Sweden) at 0.5, 1, 2, 3, 4 and 6 kHz in a soundproof booth. Hearing impairment was defined as a hearing level exceeding an average of 40 dB on pure-tone audiometry at 0.5, 1, 2 and 4 kHz. Hearing impairment was divided into bilateral hearing loss, considered ARHL, and unilateral hearing loss.

The general characteristics between subjects with and without bilateral hearing impairment were compared using Student’s t-tests for continuous parameters and χ2 tests for categorical parameters. Nutrient intakes were analyzed by quartiles, and the lowest quartile was the reference group. Univariate analyses of each nutrient were performed to investigate factors associated with hearing impairment. Multivariate logistic regression analyses were used to confirm the association between hearing impairment and each nutritional factor. The analyses were adjusted for the following potential confounders: age, sex, body mass index (BMI), smoking status, alcohol consumption, hypertension, and diabetes mellitus. The results of the logistic regression analyses are expressed as odds ratios (OR) with 95% confidence intervals (CI). p values of <0.05 were considered statistically significant. All statistical analyses were performed using SPSS software (version 21.0; IBM Corp., Armonk, NY, USA).

In conclusion, our study found that higher intake of riboflavin, niacin and retinol were inversely correlated with prevalence of bilateral hearing loss in the ≥65 years age group. ARHL was lower in the groups taking niacin and riboflavin above the recommended intake. Although Koreans have continued to adopt more western diets, traditional grain- and vegetable-oriented eating habits are still maintained by the elderly. Therefore, encouraging the consumption of dairy products and meat to ensure sufficient supplies of riboflavin, niacin, and retinol in older populations may help reduce the incidence of ARHL.

This study was supported by the National Research Foundation of Korea (NRF) grant funded by the Korea government (MSIT) (2016R1D1A1B03934900).

The authors would like to thank Keenan Bailey for the English language review. 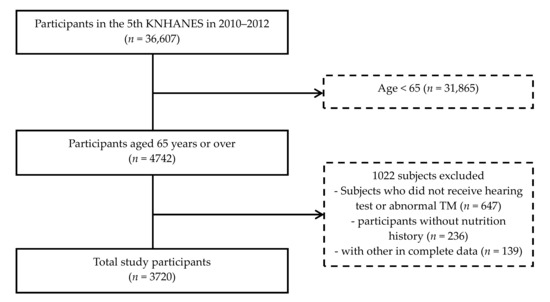 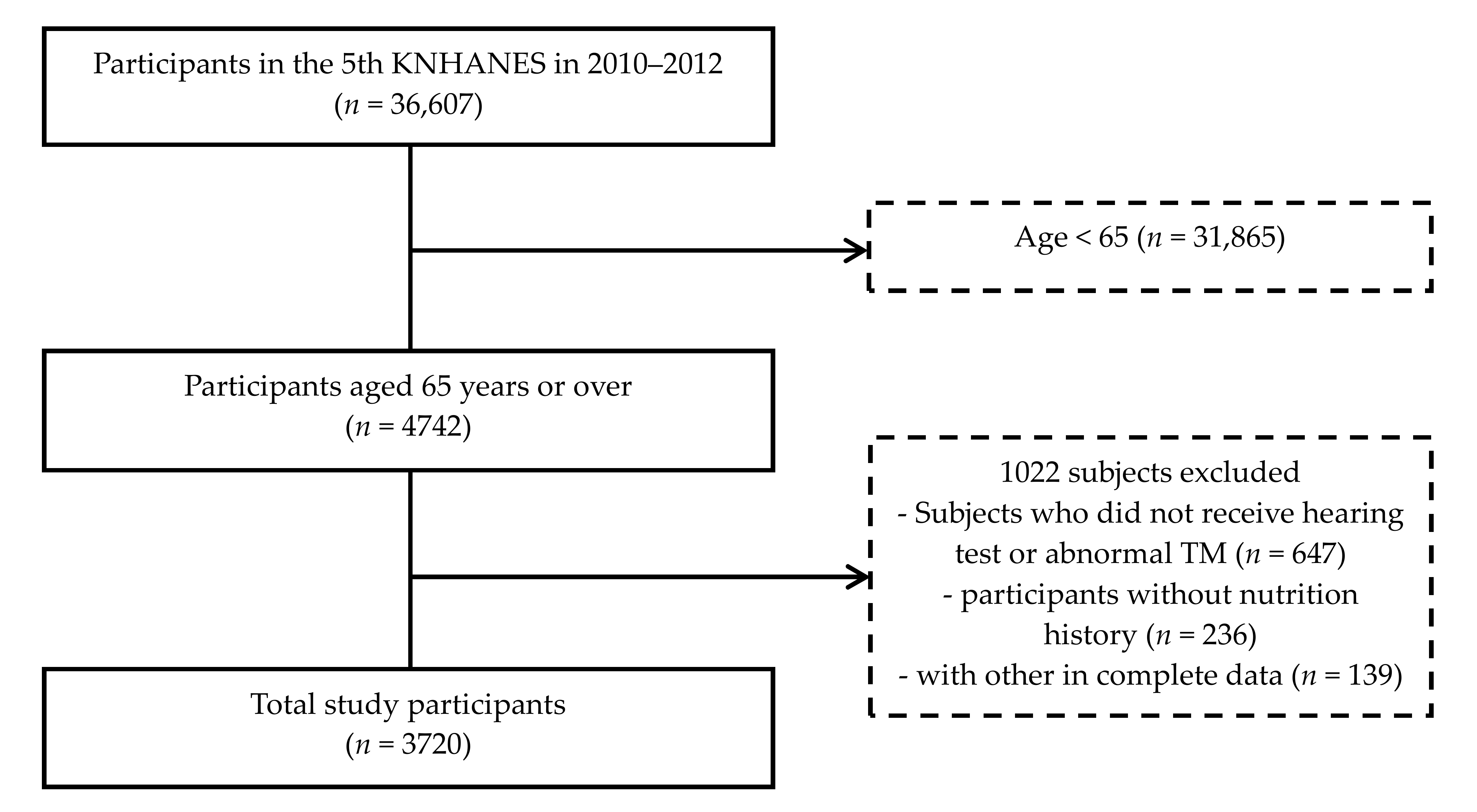 Table 4. Odds ratios of nutritional factors for unilateral hearing loss.
Table 4. Odds ratios of nutritional factors for unilateral hearing loss.
Data are presented OR (95% CI). Statistics were carried out using Logistic regression. Multivariable analysis was adjusted for age, sex, body mass index (BMI), smoking status, alcohol consumption, hypertension, and diabetes mellitus. CI, confidence interval; OR, odds ratio. * p < 0.05.
© 2019 by the authors. Licensee MDPI, Basel, Switzerland. This article is an open access article distributed under the terms and conditions of the Creative Commons Attribution (CC BY) license (http://creativecommons.org/licenses/by/4.0/).
We use cookies on our website to ensure you get the best experience. Read more about our cookies here.
Accept
We have just recently launched a new version of our website. Help us to further improve by taking part in this short 5 minute survey here. here.
Never show this again