Over the last fifty years, global meat consumption has increased in both developing and developed countries [1]. In the United States, red meat is the most commonly consumed type of meat; and processed meat represents approximately one-fourth of the total meat consumed [2]. Red and/or processed meat have been associated with higher risk of coronary heart diseases (CHD) [3], diabetes [3,4,5], and some forms of cancer [6].
Several studies have found positive associations between intake of red and/or processed meat and total, cardiovascular disease (CVD), or cancer mortality [7,8,9]. These studies were mainly conducted in populations with moderate to high levels of meat intake, leaving unanswered whether zero consumption might correlate with even lower risk. The Adventist Health Study-2 (AHS-2) has a large number of vegetarians, with even most nonvegetarians having low intakes of red and processed meat [10]. Therefore, this analysis aims to investigate the association of such low intakes of red and processed meat with all-cause, CVD, and cancer mortality.

The Adventist Health Study-2 (AHS-2) has been previously described in detail [11]. It is a prospective cohort study of approximately 96,000 Seventh-day Adventist men (~35%) and women (~65%) recruited from Adventist churches in the United States and Canada between 2002 and 2007. The cohort was formed primarily to study the possible effects of diet on cancer risk. The study was approved by the Institutional Review Board of Loma Linda University, and written informed consent was obtained from each participant upon enrolment.
For this analysis, exclusions were applied: missing dietary variables (n = 267); bad or inadequate data (e.g., unlikely response patterns including clearly invalid and identical responses to questions in a single page) (n = 507); missing more than 69 responses in the dietary section (2172); Canadian residents (n = 4393); extreme values of total energy (e.g., <500 kcal/day or >4500 kcal/day) (n = 2044); missing age, sex, or race (n = 538); age younger than 25 years at baseline (n = 8); and prevalent diseases related to mortality outcomes (i.e., prevalent cancers (except nonmelanoma skin cancers) or prevalent CVD defined as previous coronary bypass, angioplasty/stent, carotid artery surgery, myocardial infarction, stroke, or transient ischemic attack (TIA); or angina pectoris or congestive heart failure treated in the past 12 months) (n = 13,527). The analytic sample remaining was 72,149.

AHS-2 participants were requested at enrolment to complete a quantitative food frequency questionnaire (FFQ) consisting of more than 200 food items. Unprocessed red meat intake was reported as two items in the FFQ: “hamburger, ground beef (in casserole, meatballs, etc.)” and “beef or lamb as a main dish (e.g., steak, roast, stew, and pot pies)”. Processed meat was reported as: “processed beef, lamb (e.g., sausage, salami, and bologna)” and “processed chicken or turkey (e.g., turkey bologna, and turkey ham)”. Pork was classified as processed meat because most of the pork products listed in the single pork question in the FFQ were processed (i.e., “pork (bacon, sausage, ham, chops, ribs, and lunch-meat)”). The frequency of intake ranged from “never or rarely” to “2+ per day”, and serving sizes consisted of three levels (a half serving, standard serving (3–4 oz.), and one-and-a-half servings). The assigned weights for frequency and serving size in the FFQ used in AHS-2 have been previously described [12]. The intake in grams per day was calculated using the product-sum method [12,13].
The FFQ has been validated using six 24-h dietary recalls from a representative subset of the original AHS-2 cohort [12]. The deattenuated validity correlations for all types of meat, poultry, and fish combined were 0.86 and 0.85 for Whites and Blacks, respectively. Specifically, the validity correlations for unprocessed red and processed meats were 0.74 and 0.43 for Whites, respectively, and 0.68 and 0.36 for Blacks, respectively [12].

Mortality outcome data were obtained from the National Death Index and were available through December 2015. International Statistical Classification of Diseases, 10th Revision (ICD-10) codes were used to determine the underlying cause of death. Individuals who died due to unnatural causes such as motor vehicle accidents and homicides (ICD-10 letters U, V, W, X, and Y) were censored at their time of death (i.e., they were not considered as cases in the analysis of all-cause mortality). ICD-10 codes for CVD mortality ranged from I00 to I78; cancer mortality ranged from C00 to C97.

Time-dependent Cox-proportional hazards regression with attained age as the time variable and left truncation by age at study entry, controlling for potential confounding covariates, was used to assess the association between the consumption of red and processed meat and all-cause, CVD, and cancer mortality. We used multiple imputation, guided where possible, for missing data [14,15], in which the estimates were calculated from five imputed datasets, and then Rubin’s formula was applied to obtain the average estimates and corrected standard errors [16]. We analyzed intakes of unprocessed red and processed meats as continuous (log-transformed) variables measured in grams per day (g/day) comparing the 90th percentile of intake with zero-intake. To assess for possible common associations of unprocessed red and processed meats (which were highly correlated; R = 0.56), we combined both variables by summing the daily intakes from unprocessed red meat and processed meat together to create one single variable. Regression calibration of the exposures was used, where reported, to minimize the possible bias in the association estimates due to measurement error [17,18]. Only exposures of interest (red and processed meat) were calibrated, not all dietary covariates. In this procedure, a shortened version of the main questionnaire (limited to the dietary/FFQ portion), was administered to a 1000-subject (equal allocation for Whites and Blacks) subsample of the AHS-2 cohort. The subsample was approximately representative of the AHS-2 cohort in terms of gender, age, education, and vegetarian status [19]. Six 24-h dietary recalls were also collected from the subsample. From this data, a linear model was produced, regressing the intakes of red and processed meats from dietary recalls on the corresponding intakes from the food frequency questionnaire, controlling for the respective covariates present in each analytic model. The coefficients of the exposures of interest (red and processed meats) from the linear model were used to predict calibrated intake values from the intake values obtained from the FFQ of the original cohort. That is, predicted 24-h recall intake values produced by a linear model regressing intake values from the 24-h recalls against those from the FFQ, adjusted for the analytic covariates, are used in the analytic models to produce calibrated effect estimates. These calibrated intake variables were then used in the analytic models to produce calibrated hazard ratios. A 4000-round bootstrap was used to produce bias-corrected and accelerated (BCa) confidence intervals for these hazard ratios. We also conducted analyses using five categories of intake (i.e., a zero-intake group plus quartiles of consumers). Linear trends across the categories were tested by assigning the medians of intake in each quartile to all participants in that quartile and analyzing them as continuous variables. Also, we assessed the linearity of the relationship between the exposures and mortality outcomes using 4-knot restricted cubic spline regression. Dietary exposures and covariates were energy-adjusted using the residual method [20].
We tested for interaction of the exposures of interest with age, sex, and race. Other covariates were also tested for possible interactions with the exposures, and for possible interactions with each other where suspected. We separately conducted subgroup analyses by sex and race, in which we used sex- and race-specific ranges and values of intakes for the exposures. Further, we conducted separate analyses on those who reported they never smoked in order to address the effect of residual confounding by smoking in the original models. The proportional hazards assumption of the model was assessed using log(−log) plots, Schoenfeld residuals, and attained-age interaction terms; there was no violation. We also calculated population attributable risk comparing the 90th percentile of the combined intake of red and processed meat (~49 g/day) with zero-intake (assuming causality) [21]. SAS (version 9.4; SAS Institute, Inc., Cary, CA, USA) was used to perform the main analyses of the study. R (version 3.5.1 software; a Language and Environment for Statistical Computing; R Foundation for Statistical Computing, Vienna, Austria) [22] was used for multiple imputation (package “Hmisc”) [23], spline regression (package “rms”) [24], and regression calibration (package “boot”) [25].

In conclusion, we found higher all-cause and CVD mortality to be associated with relatively low intake of red and processed meat (and of unprocessed red meat in particular), compared to zero intake. While caution is appropriate in inferring causation from observational data, these results suggest possible adverse effects of red and processed meat, even with low to moderate levels of intake.

The authors declare no conflicts of interest. The funder had no role in the design of the study; in the collection, analyses, or interpretation of data; in the writing of the manuscript, or in the decision to publish the results. 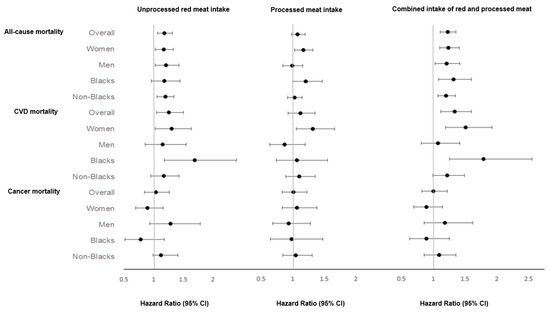