Prevention of Type 2 Diabetes by Lifestyle Changes: A Systematic Review and Meta-Analysis
Previous Article in Journal

Dietary Inflammatory Index and Risk of Breast Cancer Based on Hormone Receptor Status: A Case-Control Study in Korea

Breast cancer (BC) is the major cause of cancer death in women and its incidence has increased rapidly [1]. The world estimate for 2035 is for 2.6 million cases and 846 thousand deaths from this disease [2]. Among treatment options, chemotherapy (CT) makes it possible to cure some tumors and to treat non-detectable metastases in advance of clinical presentation [3]. However, the use of drugs with a systemic cytotoxic action affects both tumor cells and normal cells, which can cause toxicity and adverse effects, impacting food consumption and nutritional status [4].
During CT sessions, patients may present with various adverse side effects, such as nausea, pain, fatigue, and changes in perception of flavor and smell, which may decrease food palatability and consequently, result in inadequate food intake [5]. According to recent data from our research group, in women with BC, CT interferes negatively with diet and perceptions of the organoleptic properties of food, as well as nutritional status and quality of life [6,7,8,9]. Despite the adverse effects of CT on dietary adequacy, weight gain is very common in women with BC; this may be influenced by relatively common treatment with steroid drugs, menopausal status, and tumor characteristics [5,10]. It is important to emphasize that a patient’s initial weight or excess weight gain after cancer diagnosis negatively impacts prognosis, quality of life, and survival of women with BC [11,12,13]. This appears to be due, in part, to changes in levels of chronic, systemic inflammation, as indicated by inflammatory markers [14,15].
In addition to being overweight, another factor capable of modulating inflammation is diet [16,17]. The Western dietary pattern, which is rich in red meat, full-fat dairy products, and refined grains, is related to the increase of inflammatory markers such as C-reactive protein (CRP) and interleukin-6 (IL-6) [17]. Conversely, the Mediterranean diet, which is characterized by high consumption of fruit, vegetables, whole grains, and fish; low consumption of red meat and butter; and moderate consumption of alcohol and olive oil, is related to the decrease of these inflammatory markers [17]. Inflammation may also increase the risk of several diseases such as diabetes, cardiovascular, osteoarticular, and intestinal diseases and even cancer (e.g., second primaries) [18].
Cavicchia et al. [19] developed and validated a dietary index capable of predicting the level of inflammation and the results of cancer and other diseases and health events. The second generation of the Dietary Inflammatory Index (DII®), developed by Shivappa et al. [20], identified a total of 45 dietary parameters associated with six inflammatory biomarkers.
CT is a treatment that negatively interferes with nutritional status and food consumption, both in quantitative and qualitative terms [21,22], and such changes may, in turn, interfere with the inflammatory profile. Therefore, it is relevant to investigate the relationship between food consumption, nutritional status, and inflammation throughout treatment. We hypothesize that throughout CT, the diet of women with BC becomes more pro-inflammatory as a result of the increase in the consumption of calorie-dense foods that are associated with higher DII® scores (more pro-inflammatory diet). Thus, this study aimed to evaluate, in a sample of women with BC receiving CT, the association between the average consumption of food groups (grams/day) and the DII® score, as well as changes in nutritional status throughout CT treatment.

We used the G*Power software, version 3.1 (Düsseldorf, Germany) to calculate the sample size [23]. An F test was conducted using ANOVA repeated measures. Based on an effect size f of 0.25, an alpha level of 0.05, 95% power, one group of individuals, three measurements, and a 20% adjustment for possible losses of degrees of freedom, we determined that a minimum of 52 women were needed at T0.
The inclusion criteria were females aged 18 years or older that had been diagnosed with primary BC, who were in their first cycle of CT, and had both the verbal and cognitive ability to participate.
Women with any of the following characteristics were excluded: under 18 years of age, had a change in treatment due to toxicity or disease recurrence, had a primary tumor site other than the breast, had undergone an anticancer treatment that did not include CT, were not in the first cycle of CT, and had either verbal or cognitive impediments.
All eligible women who had been seen during the study period were invited to participate in the study even if they were waiting for medical consultation in the oncology department. Once informed about the project, volunteers who were eligible to participate agreed to enroll by signing the voluntary consent form.
Data on socioeconomic, clinical, and therapeutic status were collected during interviews and from medical records.

Measurements were taken by an experienced nutritionist using a protocol of the World Health Organization (WHO) [24]. Volunteers were requested to wear only light clothes and be barefoot. Their body weight (kg) and height (m) were measured to calculate the body mass index (BMI in kg/m2). A calibrated mechanical scale (model P-150C; Líder Balanças, Sao Paulo, Brazil) was used to measure weight, which had a sensitivity of 100 g; for height, a vertical stadiometer (model P-150C; Líder Balanças) with a 1-mm precision scale was used. The BMI was classified as recommended by the WHO [25] for the adult population (age >20 years and <60 years), with underweight: <18.5 kg/m2, normal weight: 18.5–24.9 kg/m2, overweight: 25.0–29.9 kg/m2, grade I obesity: 30.0–34.9 kg/m2, grade II obesity: 35.0–39.9 kg/m2, and grade III obesity ≥40.0 kg/m2; and by Lipschitz [26] for the elderly (≥60 years), with underweight: <21.9 kg/m2, normal weight: 22–27 kg/m2, overweight: >27 kg/m2. A flexible and inelastic tape with a 1-mm precision was used to measure waist circumference (WC) and hip circumference (HC), using a protocol from Lohman, Roche, and Martorell [27]. These measures were used to compute the waist-to-hip ratio (WHR) and the waist-to-height ratio (WHtR). In order to classify the risk of metabolic complications associated with obesity, we used these cut-off points proposed by the WHO [25]: >80 cm for WC; and >0.85 for WHR. To assess WHtR, the cut-off point of ≥0.5 established by Ashwell and Hsieh [28] was adopted, which indicates an excess of abdominal adiposity.

Dietary assessment was performed using data obtained from the telephone application of three 24-hour dietary recalls (24HRs) on two non-consecutive weekdays and one on the weekend at each CT time; totaling nine 24HRs per participant. Telephone calls were made starting from the day after the infusion of CT and before the next appointment (Δt = 21 days), preferably in the second week after the infusion to avoid the acute effect of CT. From these 24HRs, we calculated the consumption of the food groups in grams per day (g/day) and, ultimately, the DII® score.
Dietpro® software version 5.7 (AS Sistemas, Viçosa, MG, Brazil) was used to convert measurements from the 24HRs in grams or milliliters and these data were entered into a Microsoft Excel version 1908 (Redmond, WA, USA) spreadsheet. Consumption data, in g/day, included the following food groups: total fruit (including fruit and natural fruit juices); total vegetables (raw, cooked, salted); total grains (refined cereals, roots, tubers, bakery products, except whole grains); whole grains; fish; red meat (bovine and porcine); poultry and eggs; milk and dairy products; beans; vegetable oils; and simple sugars (including the additional sugar and the sugar of soft drinks, sweets, chocolate, and honey). The quantification of nutrients was performed using Nutrition Data System for Research (NDSR) software version 2010 (Minneapolis, MN, USA), using the table from the United States Department of Agriculture [29] as a reference, and for foods not found in this table, the Brazilian Food Composition Table [30] was used in addition to the software output.
We calculated the DII® score using the method established by Shivappa et al. [20]. In this study, a total of 28 food parameters were used for the calculation of DII®: vitamin B12, vitamin B6, beta-carotene, carbohydrate, cholesterol, energy, fat, fiber, iron, magnesium, monounsaturated fatty acids (MUFAs) and polyunsaturated fatty acids (PUFAs), niacin, omega 3, omega 6, protein, riboflavin, saturated fat, selenium, thiamine, vitamin C, vitamin D, vitamin E, zinc, isoflavone, trans fat, vitamin A, and folic acid.
In order to reduce the intra- and inter-individual variability of food consumption, before the calculation of the DII®, the energy and nutrient consumption were deattenuated [31]. Subsequently, these variables were adjusted by the mean energy of the sample using the residual method [32].

Data were analyzed using SPSS® software, version 21.0 (SPSS Inc., Chicago, IL, USA). Initially, normality was evaluated using the Kolmogorov–Smirnov test. According to variable distributions, parametric or non-parametric tests were performed, and the results were expressed as mean ± standard deviation, or as a median with 25th and 75th percentiles.
The one-way ANOVA test with repeated measures and Bonferroni post-hoc, or the non-parametric Friedman with multiple comparison tests, were used throughout the treatment (T0, T1, and T2) for the analysis of the DII® score, anthropometric measures, and mean consumption of food groups (g/day). An independent-samples t-test and Mann–Whitney test were used to compare means and mean ranks, respectively, of anthropometric measures categorized as below or equal/above the median DII® score. Simple linear regression analyses were performed to verify the predictive capacity of the mean consumption of each food group (independent variable) in relation to the DII® score (dependent variable). Extreme values/outliers were removed for this statistical test. Also, correlations were made between the anthropometric variables and DII® scores at the three CT time points using a Pearson or Spearman correlation. The DII® was evaluated as a continuous variable and also as a categorical variable (0 = below the median and 1 = equal or above median). The 95% confidence interval (CI) and p-values were also calculated.

The results show that women with BC receiving CT presented significant changes in nutritional status and the consumption of total fruit, total vegetables, poultry, and eggs. In addition, a significant change was observed in relation to DII®, with a significant increase during the treatment, which was related to the intake of the total fruit, total vegetables, total grains, and simple sugars groups, as well as higher abdominal adiposity.
Considering that the increase in the inflammatory profile of the diet was caused by such changes in food consumption, it may be necessary to stress the dietary guidelines, both during and after treatment, such that BC survivors may adopt healthier eating practices. The adoption of a diet with adequate nutritional quality, associated with maintaining healthy weight, demonstrates the risk reduction of relapse and comorbidities. To put the current study’s results into context, it is important to note that previous work with macrobiotics (a Japanese-inspired low-DII® diet) [52,53] indicates a possible reduction in the risk of recurrence [54].
Based on the results presented, it is reasonable to encourage female BC patients on CT to adopt a low-DII® diet to improve their prognosis and hasten recovery from the disease.

This research was funded by the Conselho Nacional de Desenvolvimento Científico e Tecnológico – Brazil (CNPq), Fundação de Amparo à Pesquisa do Estado de Minas Gerais – Brazil (FAPEMIG) and Coordenação de Aperfeiçoamento de Pessoal de Nível Superior – Brazil (CAPES). The funders had no role in the design of the study; in the collection, analyses, or interpretation of data; in the writing of the manuscript, nor in the decision to publish the results.

To the female volunteers of this study.

J.R.H. owns a controlling interest in Connecting Health Innovations LLC (CHI), a company that has licensed the right to his invention of the Dietary Inflammatory Index (DII®) from the University of South Carolina in order to develop computer and smart phone applications for patient counselling and dietary intervention in clinical settings. N.S. is an employee of CHI. None of the other authors declare any conflicts of interest. 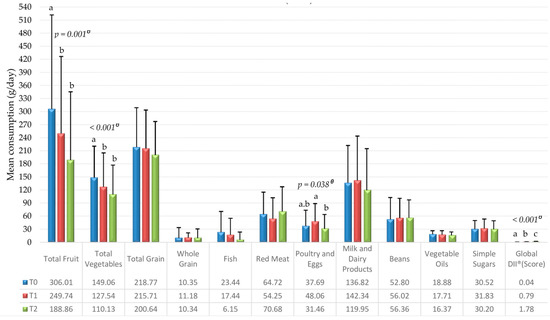 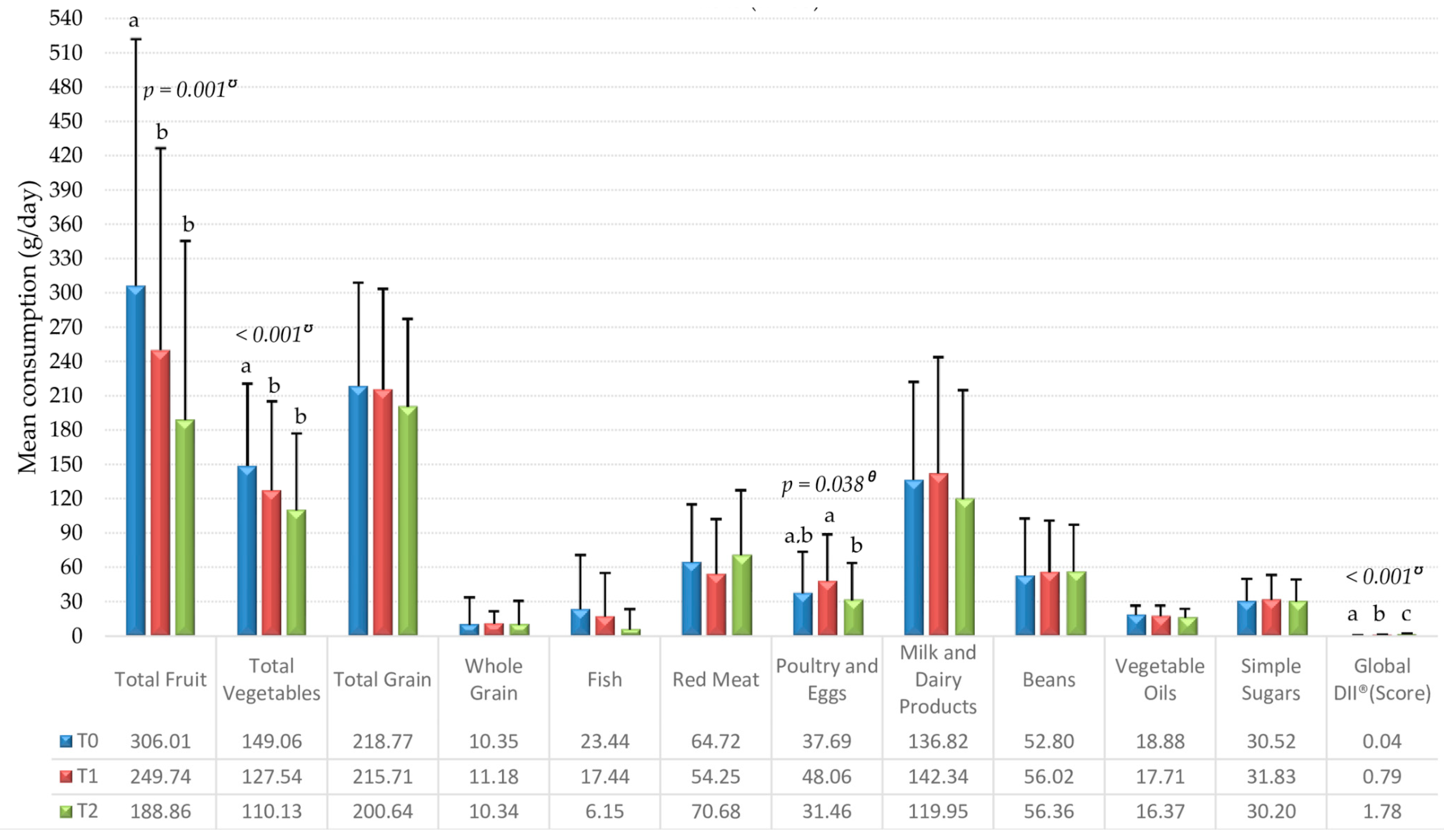