Wheat Albumin Increases the Ratio of Fat to Carbohydrate Oxidation during the Night in Healthy Participants: A Randomized Controlled Trial
Previous Article in Journal

Glucose Response during the Night Is Suppressed by Wheat Albumin in Healthy Participants: A Randomized Controlled Trial

Postprandial blood glucose excursions are important for achieving optimal glycemic control. In normal-weight individuals, glucose tolerance is diminished in the evening compared to glucose tolerance in the morning. Wheat albumin (WA) has the potential to suppress the postprandial glucose response with a relatively small dose, compared to the dose required when using dietary fiber. In the present study, the effect of WA on glycemic control during the night was investigated after a late evening meal. A randomly assigned crossover trial involving a single oral ingestion in healthy male participants was performed in a double-blind placebo-controlled manner. The participants ingested the placebo (PL) tablets or the WA (1.5 g)-containing tablets 3 min before an evening meal at 22:00 hour, and blood samples were drawn during the night until 07:00 hour using an intravenous cannula. The participants slept from 00:30 hour to 06:30 hour. Glucose response, as a primary outcome during the night, was suppressed significantly by the WA treatment compared to the PL treatment, but the insulin response was not. Plasma glucose-dependent insulinotropic polypeptide concentration during the night was lowered significantly by the WA treatment compared to the PL treatment. In conclusion, WA may be a useful food constituent for glycemic control during the night. View Full-Text
Keywords: glucose; human; night; postprandial; wheat albumin glucose; human; night; postprandial; wheat albumin
►▼ Show Figures 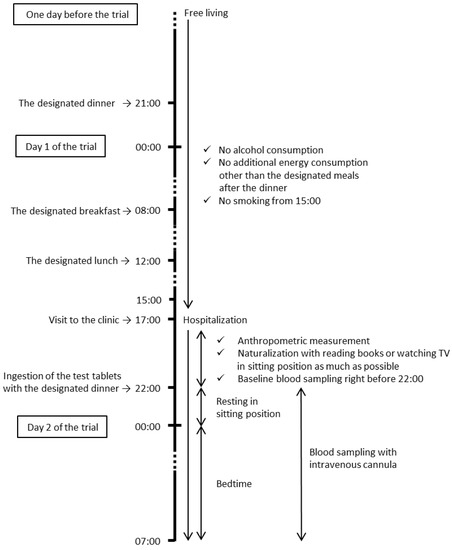