Historic topographic maps, which are georeferenced and made publicly available by the United States Geological Survey (USGS) and the National Map’s Historical Topographic Map Collection (HTMC), are a valuable source of historic land cover and land use (LCLU) information that could be used to expand the historic record when combined with data from moderate spatial resolution Earth observation missions. This is especially true for landscape disturbances that have a long and complex historic record, such as surface coal mining in the Appalachian region of the eastern United States. In this study, we investigate this specific mapping problem using modified UNet semantic segmentation deep learning (DL), which is based on convolutional neural networks (CNNs), and a large example dataset of historic surface mine disturbance extents from the USGS Geology, Geophysics, and Geochemistry Science Center (GGGSC). The primary objectives of this study are to (1) evaluate model generalization to new geographic extents and topographic maps and (2) to assess the impact of training sample size, or the number of manually interpreted topographic maps, on model performance. Using data from the state of Kentucky, our findings suggest that DL semantic segmentation can detect surface mine disturbance features from topographic maps with a high level of accuracy (Dice coefficient = 0.902) and relatively balanced omission and commission error rates (Precision = 0.891, Recall = 0.917). When the model is applied to new topographic maps in Ohio and Virginia to assess generalization, model performance decreases; however, performance is still strong (Ohio Dice coefficient = 0.837 and Virginia Dice coefficient = 0.763). Further, when reducing the number of topographic maps used to derive training image chips from 84 to 15, model performance was only slightly reduced, suggesting that models that generalize well to new data and geographic extents may not require a large training set. We suggest the incorporation of DL semantic segmentation methods into applied workflows to decrease manual digitizing labor requirements and call for additional research associated with applying semantic segmentation methods to alternative cartographic representations to supplement research focused on multispectral image analysis and classification. View Full-Text
Keywords: semantic segmentation; UNet; deep learning; convolutional neural networks; topographic maps; feature extraction; surface mining; resource extraction semantic segmentation; UNet; deep learning; convolutional neural networks; topographic maps; feature extraction; surface mining; resource extraction
►▼ Show Figures 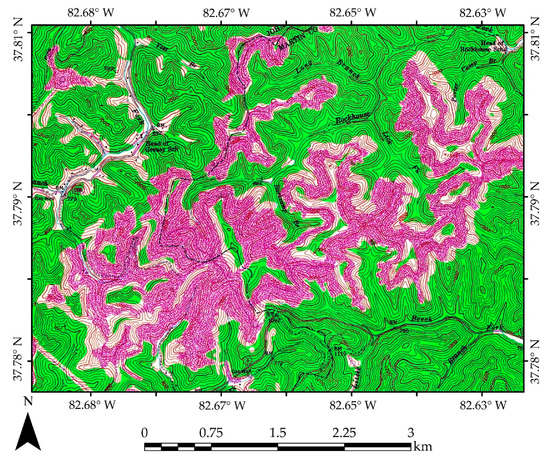