Accurate methods to estimate the aboveground biomass (AGB) of mangroves are required to monitor the subtle changes over time and assess their carbon sequestration. The AGB of forests is a function of canopy-related information (canopy density, vegetation status), structures, and tree heights. However, few studies have attended to integrating these factors to build models of the AGB of mangrove plantations. The objective of this study was to develop an accurate and robust biomass estimation of mangrove plantations using Chinese satellite optical, SAR, and Unmanned Aerial Vehicle (UAV) data based digital surface models (DSM). This paper chose Qi’ao Island, which forms the largest contiguous area of mangrove plantation in China, as the study area. Several field visits collected 127 AGB samples. The models for AGB estimation were developed using the random forest algorithm and integrating images from multiple sources: optical images from Gaofen-2 (GF-2), synthetic aperture radar (SAR) images from Gaofen-3 (GF-3), and UAV-based digital surface model (DSM) data. The performance of the models was assessed using the root-mean-square error (RMSE) and relative RMSE (RMSEr), based on five-fold cross-validation and stratified random sampling approach. The results showed that images from the GF-2 optical (RMSE = 33.49 t/ha, RMSEr = 21.55%) or GF-3 SAR (RMSE = 35.32 t/ha, RMSEr = 22.72%) can be used appropriately to monitor the AGB of the mangrove plantation. The AGB models derived from a combination of the GF-2 and GF-3 datasets yielded a higher accuracy (RMSE = 29.89 t/ha, RMSEr = 19.23%) than models that used only one of them. The model that used both datasets showed a reduction of 2.32% and 3.49% in RMSEr over the GF-2 and GF-3 models, respectively. On the DSM dataset, the proposed model yielded the highest accuracy of AGB (RMSE = 25.69 t/ha, RMSEr = 16.53%). The DSM data were identified as the most important variable, due to mitigating the saturation effect observed in the optical and SAR images for a dense AGB estimation of the mangroves. The resulting map, derived from the most accurate model, was consistent with the results of field investigations and the mangrove plantation sequences. Our results indicated that the AGB can be accurately measured by integrating images from the optical, SAR, and DSM datasets to adequately represent canopy-related information, forest structures, and tree heights. View Full-Text
Keywords: mangrove plantation; aboveground biomass estimation; optical images; SAR; DSM mangrove plantation; aboveground biomass estimation; optical images; SAR; DSM
►▼ Show Figures 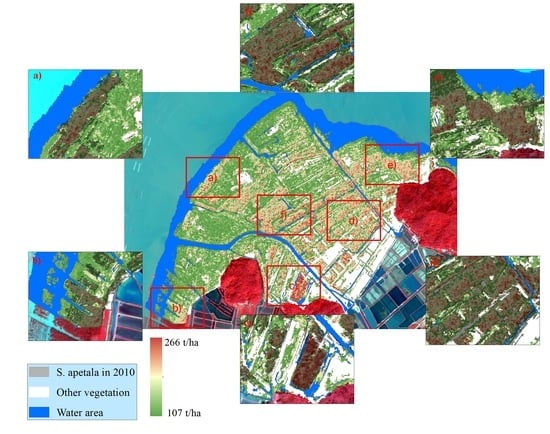