This work evaluates the sensitivity of CO2 air–sea gas exchange in a coastal site to four different model system configurations of the 1D coupled hydrodynamic–ecosystem model GOTM–ERSEM, towards identifying critical dynamics of relevance when specifically addressing quantification of air–sea CO2 exchange. The European Sea Regional Ecosystem Model (ERSEM) is a biomass and functional group-based biogeochemical model that includes a comprehensive carbonate system and explicitly simulates the production of dissolved organic carbon, dissolved inorganic carbon and organic matter. The model was implemented at the coastal station L4 (4 nm south of Plymouth, 50°15.00’N, 4°13.02’W, depth of 51 m). The model performance was evaluated using more than 1500 hydrological and biochemical observations routinely collected at L4 through the Western Coastal Observatory activities of 2008–2009. In addition to a reference simulation (A), we ran three distinct experiments to investigate the sensitivity of the carbonate system and modeled air–sea fluxes to (B) the sea-surface temperature (SST) diurnal cycle and thus also the near-surface vertical gradients, (C) biological suppression of gas exchange and (D) data assimilation using satellite Earth observation data. The reference simulation captures well the physical environment (simulated SST has a correlation with observations equal to 0.94 with a p > 0.95). Overall, the model captures the seasonal signal in most biogeochemical variables including the air–sea flux of CO2 and primary production and can capture some of the intra-seasonal variability and short-lived blooms. The model correctly reproduces the seasonality of nutrients (correlation > 0.80 for silicate, nitrate and phosphate), surface chlorophyll-a (correlation > 0.43) and total biomass (correlation > 0.7) in a two year run for 2008–2009. The model simulates well the concentration of DIC, pH and in-water partial pressure of CO2 (pCO2) with correlations between 0.4–0.5. The model result suggest that L4 is a weak net source of CO2 (0.3–1.8 molCm−2 year−1). The results of the three sensitivity experiments indicate that both resolving the temperature profile near the surface and assimilation of surface chlorophyll-a significantly impact the skill of simulating the biogeochemistry at L4 and all of the carbonate chemistry related variables. These results indicate that our forecasting ability of CO2 air–sea flux in shelf seas environments and their impact in climate modeling should consider both model refinements as means of reducing uncertainties and errors in any future climate projections. View Full-Text
Keywords: data assimilation; 1D ecosystem model; CO2; air–sea gas exchange data assimilation; 1D ecosystem model; CO2; air–sea gas exchange
►▼ Show Figures 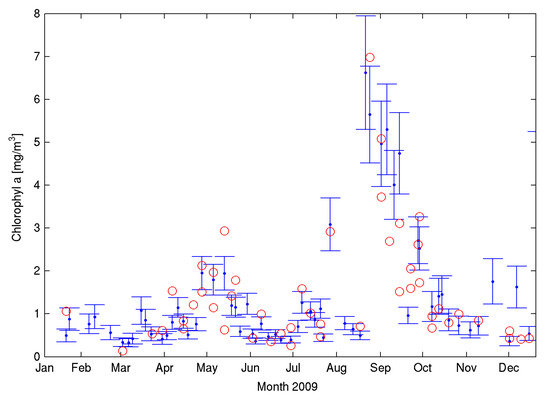