Extraction of Visible Boundaries for Cadastral Mapping Based on UAV Imagery

Postclassification Comparison (PCC) has been widely used as a change-detection method. The PCC algorithm is straightforward and easily applicable to all satellite images, regardless of whether they are acquired from the same sensor or in the same environmental conditions. However, PCC is prone to cumulative error, which results from classification errors. Alternatively, Change Vector Analysis in Posterior Probability Space (CVAPS), which interprets change based on comparing the posterior probability vectors of a pixel, can alleviate the classification error accumulation present in PCC. CVAPS identifies the type of change based on the direction of a change vector. However, a change vector can be translated to a new position within the feature space; consequently, it is not inconceivable that identical measures of direction may be used by CVAPS to describe multiple types of change. Our proposed method identifies land-cover transitions by using a fusion of CVAPS and PCC. In the proposed algorithm, contrary to CVAPS, a threshold does not need to be specified in order to extract change. Moreover, the proposed method uses a Random Forest as a trainable fusion method in order to obtain a change map directly in a feature space which is obtained from CVAPS and PCC. In other words, there is no need to specify a threshold to obtain a change map through the CVAPS method and then combine it with the change map obtained from the PCC method. This is an advantage over other change-detection methods focused on fusing multiple change-detection approaches. In addition, the proposed method identifies different types of land-cover transitions, based on the fusion of CVAPS and PCC, to improve the results of change-type determination. The proposed method is applied to images acquired by Landsat and Quickbird. The resultant maps confirm the utility of the proposed method as a change-detection/labeling tool. For example, the new method has an overall accuracy and a kappa coefficient relative improvement of 7% and 9%, respectively, on average, over CVAPS and PCC in determining different types of change. View Full-Text
Keywords: land-cover change; Change Vector Analysis in Posterior Probability Space (CVAPS); Postclassification Comparison (PCC); fusion land-cover change; Change Vector Analysis in Posterior Probability Space (CVAPS); Postclassification Comparison (PCC); fusion
►▼ Show Figures 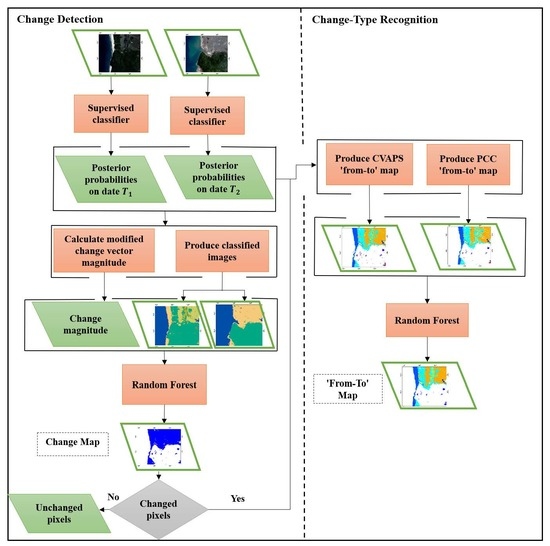