Does Anthropogenic Land Use Change Play a Role in Changes of Precipitation Frequency and Intensity over the Loess Plateau of China?
Previous Article in Special Issue

Advanced parametric financial instruments, like weather index insurance (WII) and risk contingency credit (RCC), support disaster-risk management and reduction in the world’s most disaster-prone regions. Simultaneously, satellite data that are capable of cross-checking rainfall estimates, the “standard dataset” to develop such financial safety nets, are gaining importance as complementary sources of information. This study concentrates on the analysis of satellite-derived multi-sensor soil moisture (ESA CCI, Version v04.2), the evapotranspiration-based Evaporative Stress Index (ESI), and CHIRPS (Climate Hazards Group InfraRed Precipitation with Station data) rainfall estimates in nine East African countries. Based on spatial correlation analysis, we found matching spatial/temporal patterns between all three datasets, with the highest correlation coefficient occurring between October and March. In large parts of Kenya, Ethiopia, and Somalia, we observed a lower (partly negative) correlation coefficient between June and August, which was likely caused by issues related to cloud cover and the volume scattering of microwaves in sandy, hot soils. Based on simple linear and logit regression analysis with annual, national maize yield estimates as the dependent variable, we found that, depending on the chosen period (averages per year, growing or harvesting months), there was added value (higher R-squared) if two or all three variables were combined. The ESI and soil moisture have the potential to close sensitive knowledge gaps between atmospheric moisture supply and the response of the land surface in operational parametric insurance projects. For the development and calibration of WII and RCC, this means that better proxies for historical and potential future drought impact can strengthen “drought narratives”, resulting in a better match between calculated payouts/credit repayment levels and the actual needs of smallholder farmers. View Full-Text
Keywords: remote sensing; soil moisture; evapotranspiration; drought; disaster risk management; weather index insurance; risk contingency credit remote sensing; soil moisture; evapotranspiration; drought; disaster risk management; weather index insurance; risk contingency credit
►▼ Show Figures 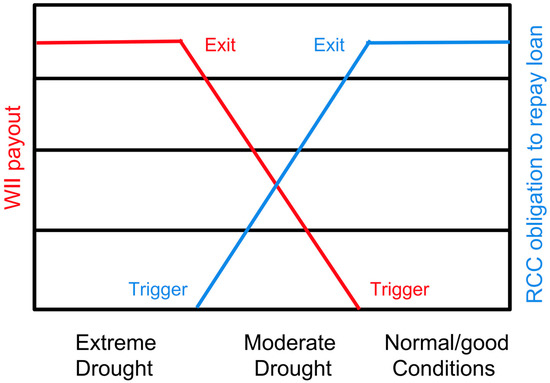