The Integrated Spatial Pattern of Child Mortality during the 2012–2016 Drought in La Guajira, Colombia

Drought Risk to Agricultural Systems in Zimbabwe: A Spatial Analysis of Hazard, Exposure, and Vulnerability

The devastating impacts of drought are fast becoming a global concern. Zimbabwe is among the countries more severely affected, where drought impacts have led to water shortages, declining yields, and periods of food insecurity, accompanied by economic downturns. In particular, the country’s agricultural sector, mostly comprised of smallholder rainfed systems, is at great risk of drought. In this study, a multimethod approach is applied, including a remote sensing-based analysis of vegetation health data from 1989–2019 to assess the drought hazard, as well as a spatial analysis combined with expert consultations to determine drought vulnerability and exposure of agricultural systems. The results show that droughts frequently occur with changing patterns across Zimbabwe. Every district has been affected by drought during the past thirty years, with varying levels of severity and frequency. Severe drought episodes have been observed in 1991–1992, 1994–1995, 2002–2003, 2015–2016, and 2018–2019. Drought vulnerability and exposure vary substantially in the country, with the south-western provinces of Matabeleland North and South showing particularly high levels. Assessments of high-risk areas, combined with an analysis of the drivers of risk, set the path towards tailor-made adaptation strategies that consider drought frequency and severity, exposure, and vulnerability. View Full-Text
Keywords: rainfed agriculture; irrigated agriculture; drought; vegetation health index; Zimbabwe rainfed agriculture; irrigated agriculture; drought; vegetation health index; Zimbabwe
►▼ Show Figures 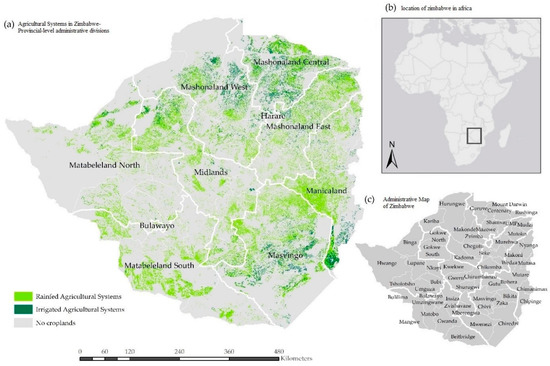