Application of Remote Sensing, GIS and Machine Learning with Geographically Weighted Regression in Assessing the Impact of Hard Coal Mining on the Natural Environment

Jordan is affected by an ever changing environment in the midst of climate change, political challenges, a fast growing economy and socio-economic pressures. Among other countries in the Middle East and Northern Africa, Jordan is facing a number of electricity related challenges, such as a rising energy demand, high dependency on fossil fuel imports and management of local, fossil and renewable resources. The paper presents an analysis based on an open source optimisation modelling approach identifying a cost-optimal extension of the Jordanian electricity system with growing demand projections until 2030 utilising pumped hydro energy storage and determining the costs of different CO2 mitigation pathways. The results highlight the large potential of renewable energy for the cost effective, environmentally friendly and energy independent development of the Jordanian electricity sector. A share of up to 50% renewable energy can be achieved with only a minor increase in levelised cost of electricity from 54.42 to 57.04 $/MWh. In particular, a combination of photovoltaic and pumped hydro storage proved to be a superior solution compared to the expansion of existing shale oil deployments due to high costs and CO2 emissions. Aiming for a more than 50% renewable energy share within the electricity mix calls for substantial wind energy deployments. In a system with a renewable energy share of 90%, wind energy covers 45% of the demand. View Full-Text
Keywords: energy system modelling; open science; GHG mitigation; pumped hydro storage; scenario analysis energy system modelling; open science; GHG mitigation; pumped hydro storage; scenario analysis
►▼ Show Figures 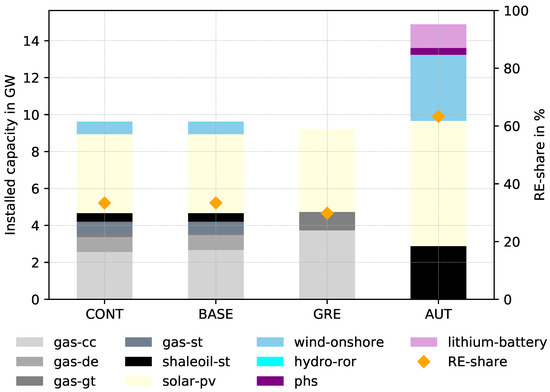