Comment on Sarathkumara et al.: Exposure to Hantavirus is a Risk Factor Associated with Kidney Diseases in Sri Lanka: A Cross Sectional Study
Next Article in Special Issue

Grapevine fanleaf virus (GFLV) and arabis mosaic virus (ArMV) are nepoviruses responsible for grapevine degeneration. They are specifically transmitted from grapevine to grapevine by two distinct ectoparasitic dagger nematodes of the genus Xiphinema. GFLV and ArMV move from cell to cell as virions through tubules formed into plasmodesmata by the self-assembly of the viral movement protein. Five surface-exposed regions in the coat protein called R1 to R5, which differ between the two viruses, were previously defined and exchanged to test their involvement in virus transmission, leading to the identification of region R2 as a transmission determinant. Region R4 (amino acids 258 to 264) could not be tested in transmission due to its requirement for plant systemic infection. Here, we present a fine-tuning mutagenesis of the GFLV coat protein in and around region R4 that restored the virus movement and allowed its evaluation in transmission. We show that residues T258, M260, D261, and R301 play a crucial role in virus transmission, thus representing a new viral determinant of nematode transmission. View Full-Text
Keywords: transmission; Nepovirus; grapevine; nematode; Xiphinema; capsid; 3D structure; movement; tubule; viral determinant transmission; Nepovirus; grapevine; nematode; Xiphinema; capsid; 3D structure; movement; tubule; viral determinant
►▼ Show Figures 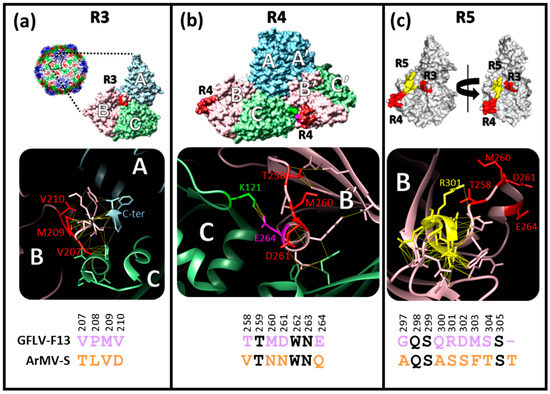