Impact of Large-Scale Afforestation on Surface Temperature: A Case Study in the Kubuqi Desert, Inner Mongolia Based on the WRF Model
Next Article in Special Issue

Research Highlights: Spatial patterns of fire spread and severity influence survival of juvenile pines in longleaf pine savannas. Small areas that do not burn during frequent fires facilitate formation of patches of even-aged longleaf pine juveniles. These regeneration patches are especially associated with inner portions of openings (gaps) and where canopy trees have died in recent decades. Patterns of prescribed fire can thus have an important influence on stand dynamics of the dominant tree in pine savannas. Background and Objectives: Savannas are characterized by bottlenecks to tree regeneration. In pine savannas, longleaf pine is noted for recruitment in discrete clusters located within gaps away from canopy trees. Various mechanisms promoting this pattern have been hypothesized: light limitations, soil moisture, soil nutrients, pine needle mulching, competition with canopy tree roots, and fire severity associated with pine needle litter. We tested the hypothesis that regeneration patches are associated with areas that remain unburned during some prescribed fires, as mediated by gaps in the canopy, especially inner portions of gaps, and areas re-opened by death of canopy trees. Materials and Methods: We mapped areas that were unburned during prescribed fires applied at 1–2 year intervals from 2005–2018 in an old-growth pine savanna in Georgia, USA. We compared the maps to locations of longleaf pine juveniles (<1.5 m height) measured in 2018 and canopy cover and canopy tree deaths using a long-term (40 year) tree census. Results: Logistic regression analysis showed juveniles to be associated with unburned areas, gaps, inner gaps, and areas where canopy trees died. Conclusions: Patterns of fire spread and severity limit survival of longleaf pine juveniles to patches away from canopy trees, especially where canopy trees have died in recent decades. These processes contribute to a buffering mechanism that maintains the savanna structure and prevents transition to closed canopy forest or open grassland communities. View Full-Text
Keywords: regeneration niche; tree population dynamics; fire effects; prescribed fire regime; regeneration bottlenecks regeneration niche; tree population dynamics; fire effects; prescribed fire regime; regeneration bottlenecks
►▼ Show Figures 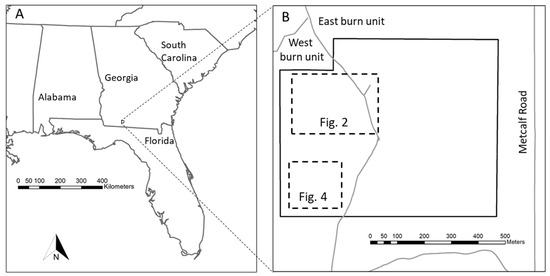