Are Wildfires a Threat to Fungi in European Pinus Forests? A Case Study of Boreal and Mediterranean Forests
Previous Article in Journal

The Nexus between the Austrian Forestry Sector and the Sustainable Development Goals: A Review of the Interlinkages
Previous Article in Special Issue

Climate Change Impacts on Pinus pinea L. Silvicultural System for Cone Production and Ways to Contour Those Impacts: A Review Complemented with Data from Permanent Plots

Long-term field-data series were used to fit a mushroom productivity model. Simulations enabled us to predict the consequences of management and climate scenarios on potential mushroom productivity. Mushrooms play an important ecological and economic role in forest ecosystems. Human interest in collecting mushrooms for self-consumption is also increasing, giving forests added value for providing recreational services. Pinus pinaster Ait. is a western Mediterranean species of great economic and ecological value. Over 7.5% of the total European distribution of the species is found on the Castilian Plateau in central Spain, where a great variety of mushrooms can be harvested. The aim of this study was to model and simulate mushroom productivity in Maritime pine (Pinus pinaster Ait.) ecosystems in northern Spain under different silvicultural and climatic scenarios. A mixed model was fitted that related total mushroom productivity to stand and weather variables. The model was uploaded to the SiManFor platform to study the effect of different silvicultural and climatic scenarios on mushroom productivity. The selected independent variables in the model were the ratio between stand basal area and density as a stand management indicator, along with precipitation and average temperatures for September and November. The simulation results also showed that silviculture had a positive impact on mushroom productivity, which was higher in scenarios with moderate and high thinning intensities. The impact was highly positive in wetter scenarios, though only slightly positive and negative responses were observed in hotter and drier scenarios, respectively. Silviculture had a positive impact on mushroom productivity, especially in wetter scenarios. Precipitation had greater influence than temperature on total mushroom productivity in Maritime pine stands. The results of this paper will enable forest managers to develop optimal management approaches for P. pinaster forests that integrate Non-Wood Forest Products resources. View Full-Text
Keywords: Maritime pine; modelling; mushrooms; non-wood forest products; SiManFor; simulation Maritime pine; modelling; mushrooms; non-wood forest products; SiManFor; simulation
►▼ Show Figures 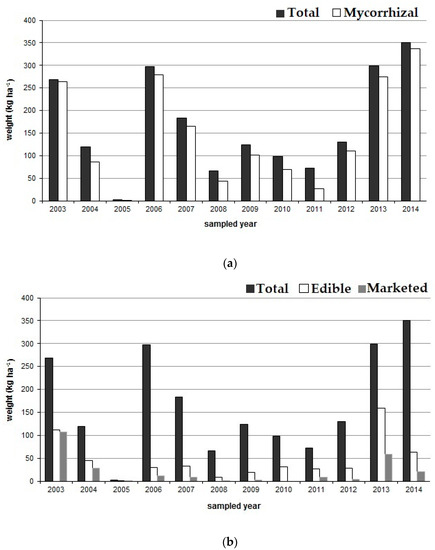