Which Selective Logging Intensity is Most Suitable for the Maintenance of Soil Properties and the Promotion of Natural Regeneration in Highly Continental Scots Pine Forests?–Results 19 Years after Harvest Operations in Mongolia

Research Highlights: The correlations between seed mass and the remaining physical properties were determined in selected fir species, and a method for seed sorting was proposed to promote uniform germination and emergence. Background and Objectives: Information about the variation and correlations between the physical properties of seeds is essential for designing and modeling seed processing operations such as seed separation. The aim of this study was to determine the range of variation in the physical properties of seeds in eleven fir species, and to analyze the correlations between these parameters to improve the seed sorting process. Materials and Methods: Terminal velocity, thickness, width, length, the angle of external friction and mass were determined in the seeds of 11 fir species. The measured parameters were used to calculate the geometric mean diameter, three aspect ratios, sphericity index and the specific mass of each seed. Results: The seeds of Sierra white fir where most similar, whereas the seeds of balsam fir differed most considerably from the seeds of the remaining fir species. In the majority of the analyzed fir species, seed mass was most strongly correlated with terminal velocity, followed by thickness. Conclusions: Fir seeds should be sorted primarily with the use of mesh sieves with longitudinal openings to obtain fractions with similar seed mass and to eliminate the need for dewinging. View Full-Text
Keywords: Abies; separation traits; correlation; sorting; fractions Abies; separation traits; correlation; sorting; fractions
►▼ Show Figures 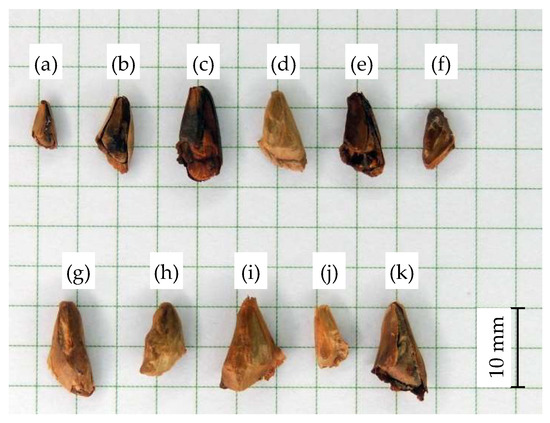