Spiders in the Web: Understanding the Evolution of REDD+ in Southwest Ghana
Previous Article in Journal

Where Did You Come From? Where Did You Go? Investigating the Origin of Invasive Leptocybe Species Using Distribution Modelling

Succession and the Relationship between Vegetation and Soil in the Marl Quarries of the Yucatan Peninsula, Mexico

Open-pit mining is a common activity in the Yucatan Peninsula for the extraction of limestone. These areas are characterized by the total removal of the natural vegetation cover and soil in order to access calcareous material. The present study shows the composition and structure of the vegetation in five quarries after approximately ten years of abandonment, and the target vegetation near to the quarries in southeastern Mexico. A linear mixed model showed that P availability is one of the limiting factors for species establishment in the quarries. Using a canonical correspondence analysis (CCA), the distribution of the species was determined in relation to the edaphic variables: soil depth, the percentage of organic matter (OM), cationic exchange capacity (CEC), pH and texture. Twenty-six families, 46 genera and 50 species were recorded in the quarries, and 25 families, 45 genera and 47 species were recorded in the conserved areas. The dominant species in the quarries belong to the families Poaceae, Fabaceae, Rubiaceae and Anacardiaceae. The quarries with higher values of OM (2%), CEC (24 Cmol/kg), depth (11 cm) and sand percentage (31%) include the following species Lysiloma latisiliquum (L.) Benth., Metopium brownei (Jacq.) Urb. and Bursera simaruba (L.) Sarg., which are common in secondary forests. Quarries with lower values of OM (0.4%), CEC (17 Cmol/kg) and depth (5.02), and with a higher percentage of silt (42%) were dominated by herbs belonging to Poaceae and by Borreria verticillate (L.) G. Mey., which are typical in disturbed areas of southeastern Mexico. In all cases, the pH was slightly alkaline due to the content of calcium carbonate (CaCO3), characteristic of the soils of the region. View Full-Text
Keywords: Post-mining regeneration; limestone quarry; tropical dry forest; quarry recovery Post-mining regeneration; limestone quarry; tropical dry forest; quarry recovery
►▼ Show Figures 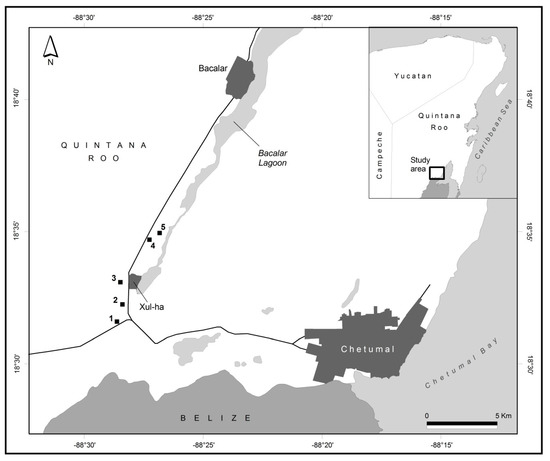 
Valdez-Hernández, Mirna; Gil-Medina, Rossana; López-Martínez, Jorge O.; Torrescano-Valle, Nuria; Cabanillas-Terán, Nancy; Islebe, Gerald A. 2019. "Succession and the Relationship between Vegetation and Soil in the Marl Quarries of the Yucatan Peninsula, Mexico." Forests 10, no. 2: 116.