Silk as a Natural Reinforcement: Processing and Properties of Silk/Epoxy Composite Laminates
Previous Article in Journal

The production by injection molding of polymeric components having micro- and nanometrical surfaces is a complex task. Generally, the accurate replication of micro- and nanometrical features on the polymeric surface during the injection-molding process is prevented by of the low mold temperature adopted to reduce cooling time. In this work, we adopt a system that allows fast heating of the cavity surface during the time the melt reaches the cavity, and fast cooling after heater deactivation. A nickel insert with micro- and nanofeatures in relief is located on the cavity surface. Replication accuracy is analyzed by Atomic Force Microscopy under different injection-molding conditions. Two grades of polylactic acid with different viscosity have been adopted. The results indicate that the higher the cavity surface temperature is, the higher the replication accuracy is. The viscosity has a significant effect only in the replication of the microfeatures, whereas its effect results are negligible in the replication of nanofeatures, thus suggesting that the interfacial phenomena are more important for replication at a nanometric scale. The evolution of the crystallinity degree on the surface also results in a key factor on the replication of nanofeatures. View Full-Text
Keywords: replication; microfeature; nanofeature; injection molding; polylactic acid; mold temperature replication; microfeature; nanofeature; injection molding; polylactic acid; mold temperature
►▼ Show Figures 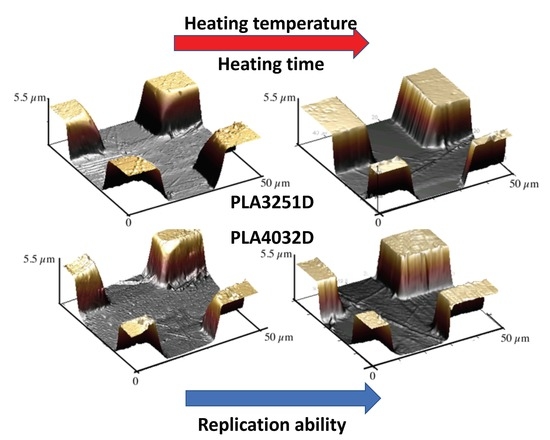