Novel Resistance Training Approach to Monitoring the Volume in Older Adults: The Role of Movement Velocity
Next Article in Special Issue

Recent Advances in Health Impact Assessment and Health in All Policies Implementation: Lessons from an International Convening in Barcelona
Previous Article in Journal

Integrated Impact Assessment of Active Travel: Expanding the Scope of the Health Economic Assessment Tool (HEAT) for Walking and Cycling

The Elaboration of an Intersectoral Partnership to Perform Health Impact Assessment in Urban Planning: The Experience of Quebec City (Canada)

Health impact assessments (HIA) allow evaluation of urban interventions’ potential effects on health and facilitate decision-making in the urban planning process. However, few municipalities have implemented this method in Canada. This paper presents the approach developed with partners, the process, and the outcomes of HIA implementation after seven years of interinstitutional collaborations in Quebec City (ten HIA). Using direct observation and meeting minutes, information includes: perceived role of each institution taking part in HIA beforehand, how the HIA process was implemented, if it was appreciated, and which outcomes were observed. The intersectoral interactions contributed to the development of a common language, which sped up the HIA process over time and fostered positive collaborations in unrelated projects. It was an effective tool to share concerns and responsibilities among independent institutions. This experience resulted in the creation of an informal group of stakeholders from four different institutions that perform HIA to this day in collaboration with researchers. View Full-Text
Keywords: health impact assessment; urban planning; public health; knowledge translation health impact assessment; urban planning; public health; knowledge translation
►▼ Show Figures 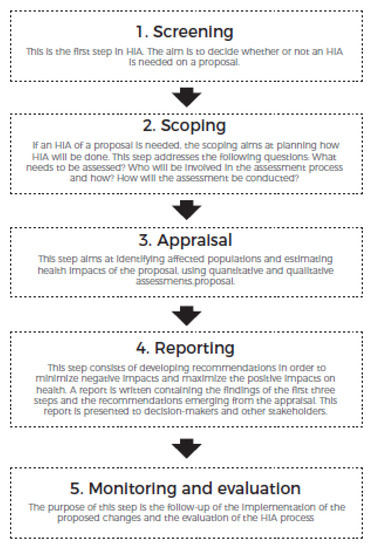