Marine Peptides: Bioactivities and Applications
Next Article in Special Issue

Production of Calcaride A by Calcarisporium sp. in Shaken Flasks and Stirred Bioreactors

Increased interest in marine resources has led to increased screening of marine fungi for novel bioactive compounds and considerable effort is being invested in discovering these metabolites. For compound discovery, small-scale cultures are adequate, but agitated bioreactors are desirable for larger-scale production. Calcarisporium sp. KF525 has recently been described to produce calcaride A, a cyclic polyester with antibiotic activity, in agitated flasks. Here, we describe improvements in the production of calcaride A in both flasks (13-fold improvement) and stirred bioreactors (200-fold improvement). Production of calcaride A in bioreactors was initially substantially lower than in shaken flasks. The cultivation pH (reduced from 6.8 to <5.4), carbon source (sucrose replacing glucose), C/N ratio and nature of mycelial growth (pellets or filaments) were important in improving calcaride A production. Up to 4.5 mg·g−1 biomass (85 mg·L−1) calcaride A were produced in the bioreactor, which was only slightly less than in shaken flasks (14 mg·g−1, 100 mg·L−1). The results demonstrate that a scalable process for calcaride A production could be developed using an iterative approach with flasks and bioreactors. View Full-Text
Keywords: marine fungi; Calcarisporium; calcaride A; stirred tank bioreactor; pH; macrocylic polyester marine fungi; Calcarisporium; calcaride A; stirred tank bioreactor; pH; macrocylic polyester
►▼ Show Figures 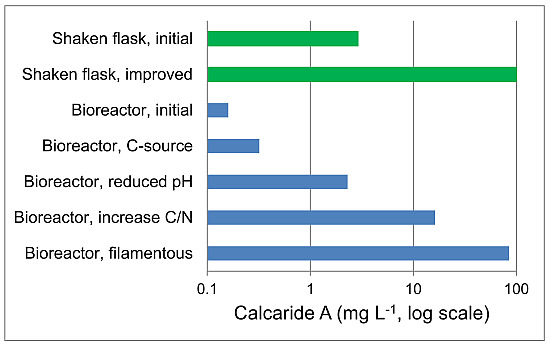