The Experience of Healthy Pregnancy in High Parity Women: A Phenomenological Study in North Jordan

Clinical Results of a Massive Blood Transfusion Protocol for Postpartum Hemorrhage in a University Hospital in Japan: A Retrospective Study

:
Background and objectives: Massive postpartum hemorrhage (PPH) is the most common cause of maternal death worldwide. A massive transfusion protocol (MTP) may be used to provide significant benefits in the management of PPH; however, only a limited number of hospitals use MTP protocol to manage massive obstetric hemorrhages, especially in Japan. This study aimed to assess the clinical outcomes in patients in whom MTP was activated in our hospital. Materials and Methods: We retrospectively reviewed the etiology of PPH, transfusion outcomes, and laboratory findings among the patients treated with MTP after delivery in our hospital. Results: MTP was applied in 24 cases (0.7% of deliveries). Among them, MTP was activated within 2 h of delivery in 15 patients (62.5%). The median estimated blood loss was 5017 mL. Additional procedures to control bleeding were performed in 19 cases, including transarterial embolization (18 cases, 75%) and hysterectomy (1 case, 4.2%). The mean number of units of red blood cells, fresh frozen plasma, and platelets were 17.9, 20.2, and 20.4 units, respectively. The correlation coefficients of any two items among red blood cells, fresh frozen plasma, platelets, blood loss, and obstetrical disseminated intravascular coagulation score ranged from 0.757 to 0.892, indicating high levels of correlation coefficients. Although prothrombin time and activated partial thromboplastin time levels were significantly higher in the <150 mg/dL fibrinogen group than in the ≥150 mg/dL fibrinogen group at the onset of PPH, the amount of blood loss and blood transfusion were comparable between the two groups. Conclusions: Our MTP provides early access to blood products for patients experiencing severe PPH and could contribute to improving maternal outcomes after resuscitation in our hospital. Our study suggests the implementation of a hospital-specific MTP protocol to improve the supply and utilization of blood products to physicians managing major obstetric hemorrhage.
Keywords:
postpartum hemorrhage; massive blood transfusion protocol; delivery

Massive postpartum hemorrhage (PPH) is the most common cause of maternal death worldwide [1,2]. Life-threatening massive PPH occurs in one out of every 300 cases [3], and its onset is difficult to predict before delivery. Once it occurs, it can result in nonstandard requests for blood products without any protocol guiding the administration of a large amount of blood in a short period.
Massive blood transfusion is traditionally defined as transfusion of 10 or more units of packed red blood cells (RBCs) in less than 24 h [4,5,6]. Massive transfusion in obstetrics requires extensive collaboration between the obstetrics, anesthesiology, and transfusion teams and consumes a large amount of blood in hospitals with limited blood product storage [7]. The tasks in these cases are demanding such that individual clinical expertise is often insufficient, and teams from obstetrics, operating rooms, and transfusion departments often do not work well together. Therefore, facilities must be prepared in providing effective treatment in such emergencies. The clinical team is expected to develop, implement, and regularly review obstetric bleeding protocols [1,4,5,6].
Many hospitals with accredited trauma centers have adopted a massive transfusion protocol (MTP) [8,9]; however, only a limited number of hospitals use the MTP protocol to manage massive obstetric hemorrhages, especially in Japan. Recently, we established an obstetric MTP suitable for our hospital to ensure a rapid and optimal supply of blood products in the acute phase for the resuscitation of patients with uncontrolled PPH.
This observational study aimed to assess the etiology of obstetric hemorrhage, transfusion requirements, and clinical outcomes in patients in whom MTP was activated in our hospital.

A database review was conducted to identify the patients who were treated with the MTP after delivery at Keio University Hospital between 1 October 2015 and 31 July 2021. Owing to the retrospective design of this study, an opt-out consent was obtained. The study was approved by the Research Ethics Review Board of Keio University (no. 20150103).
Our MTP for an obstetric life-threatening hemorrhage provides emergency release of 6 units of RBCs, 3 units of fresh-frozen plasma (FFP), 6 units of RBCs, 4 units of FFP, and 8 units of FFP with 20 units of platelets (PLT) as required (Figure 1). MTP was triggered if any of the following were observed: Shock index > 1.5, or obstetric DIC score > 8 points, or persistent abnormal vital signs. The initial RBC can be compiled and electronically issued in less than 3 min. The entire complement of blood products in the MTP can be delivered to the delivery room or operating room within 60 min. If a patient continues to hemorrhage or future hemorrhage is anticipated after the administration of blood products in the first MTP (MTP-Cycle 1), additional MTP (MTP-Cycle 2) can be activated, which consists of 12, 15, and 20 units of RBC, FFP, and PLT, respectively. While the MTP is in progress, the obstetrician can stop the MTP or change to a normal blood transfusion using a cross-match test if the patient’s condition has been stabilized. However, to prevent accidental errors in such a confusing medical situation, the dosage of blood products cannot be customized on an individual basis.
Antenatal data, such as maternal age, body mass index, parity, mode of conception, number of gestations, and obstetric complications, were collected retrospectively. The diagnosis of hypertensive disorders of pregnancy, gestational diabetes mellitus, and placenta previa was based on the clinical criteria of the Japan Society of Obstetrics and Gynecology [10]. Delivery information, including gestational age at delivery, birth weight, estimated blood loss, mode of delivery, and additional procedures to control bleeding, were also reviewed. We also collected information on MTP, including the etiology of hemorrhage, blood loss, obstetric disseminated intravascular coagulation (DIC) score, and the timing of MTP activation. The amount of RBC, FFP, and PLT transfusions was described by Japanese units, which is defined as that derived from 200 mL whole blood. Amniotic fluid embolism (AFE) was defined based on the Japan consensus criteria for the diagnosis of AFE, which is derived from the United States/United Kingdom criteria [11]. The correlations of the amount of RBC, FFP, and PLT transfusion, blood loss, and obstetrical DIC score [12], which is frequently used in Japan, were analyzed. Furthermore, we collected the following laboratory data: hemoglobin (Hb), platelet count (Plt), prothrombin time (PT), activated partial thromboplastin time (APTT), and fibrinogen (FNG) values at the onset of PPH.
IBM SPSS 25 statistical software (SPSS Inc., Chicago, IL, USA) was used for the statistical analyses. The Mann–Whitney 𝑈 test was used to analyze the continuous variables, and the linear regression analysis was performed to analyze the correlation of the amount of RBC, FFP, and PLT transfusion, obstetrical DIC score, and blood loss. The level of statistical significance was set at p < 0.05.

The patient characteristics and obstetric outcomes are shown in Table 1. During the study period, there were 3370 deliveries and 24 obstetrical MTP activations, representing 0.7% of all deliveries. The characteristics of the patients who were treated with MTP are shown in Table 1. The mean maternal age was 36.8 years (range, 31–44), and 20 patients (83.3%) were primiparous. Half of the patients conceived spontaneously, and most (87.5%) were singleton pregnancies. Obstetric complications such as hypertension disorder of pregnancy, gestational diabetes, and placenta previa occurred in approximately 20% of the patients. The mean birth weight of the infants was 2771 g (range, 1709–3532), and 20 infants (83.3%) were delivered by cesarean section.

3.2. Analysis of the Data in Patients Receiving Blood Products for MTP

3.2.2. The Timing of MTP Activation after Delivery

3.2.3. Correlation of the Amount of RBC, FFP, and PLT Transfusion, Obstetrical DIC Score, and Blood Loss

3.2.4. Clinical and Laboratory Parameters at the Onset of PPH in Patients Who Received MTP

The management of severe PPH after delivery is a challenging task for obstetric and hospital transfusion teams. Our MTP provides early access to blood products for patients experiencing severe PPH, contributing to improved maternal outcomes after resuscitation in our hospital. A hospital-based MTP specific to the obstetric field can provide life-saving transfusion therapy for patients presenting with severe PPH. In this study, the diverse etiology of PPH, high volumes of reported blood loss, high rate of blood product usage, and early coagulation factor loss suggest that an MTP may be an important therapeutic measure for managing unanticipated bleeding after delivery. We believe that it is necessary to verify through future studies whether the addition of more fibrinogen-focused components such as FNG concentrate to our MTP is effective in our hospital and if MTP is applicable to other facilities. The MTP should be optimized according to the characteristics of each facility, such as the amount of transfusion reserves, the number of FFP dissolution equipment, and manpower. Our study suggests the implementation of a hospital-specific MTP protocol to improve the supply and utilization of blood products to physicians managing major obstetric hemorrhages.

The study was conducted according to the guidelines of the Declaration of Helsinki and approved by the Institutional Review Board of Keio University, School of Medicine (no. 20150103, approved 23 June 2015).

Due to the retrospective design of this study, opt-out informed consent was obtained from all subjects involved in the study. All patient information is processed anonymously in accordance with the de-identification standard of the HIPAA Privacy Rule. 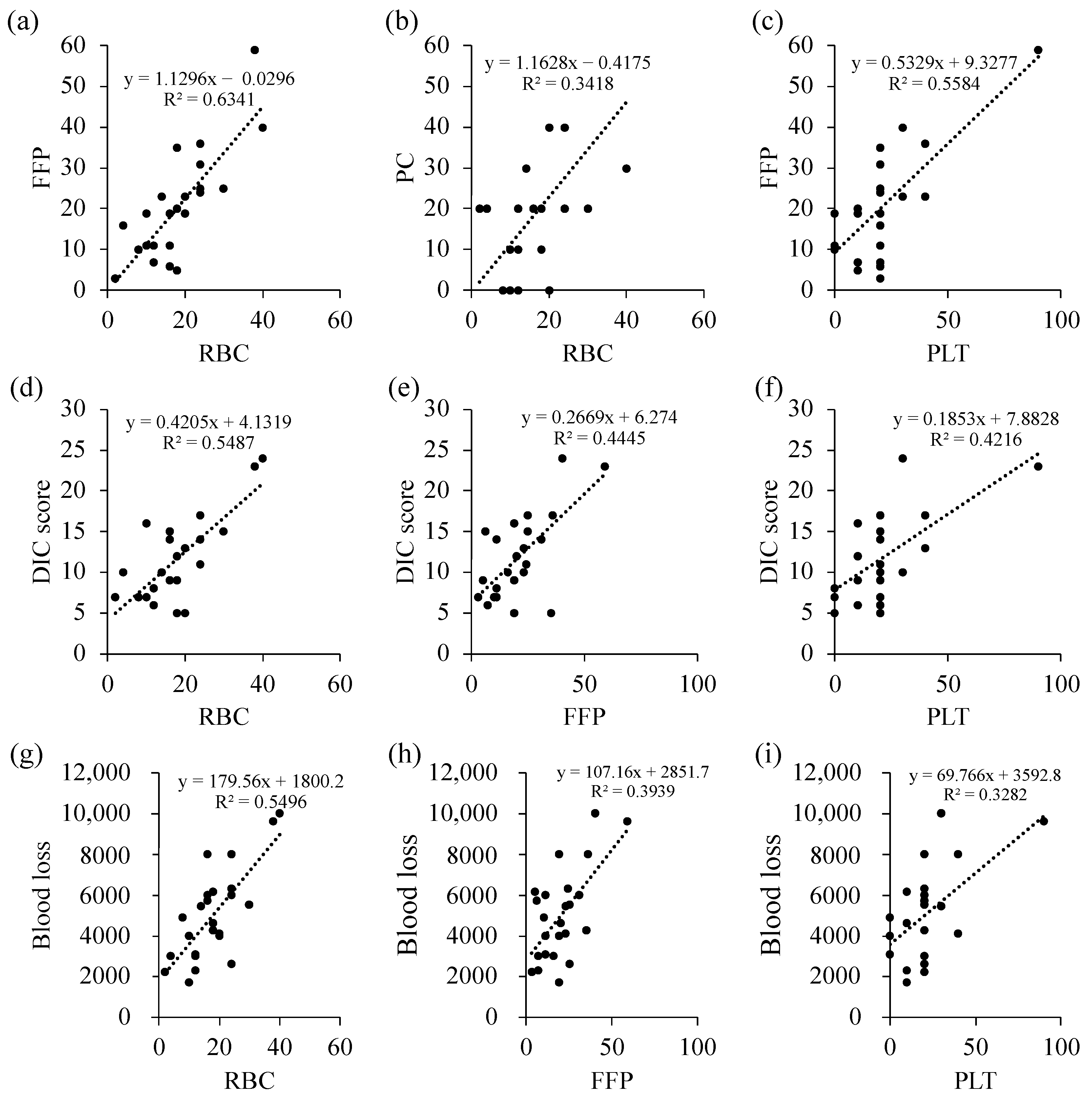 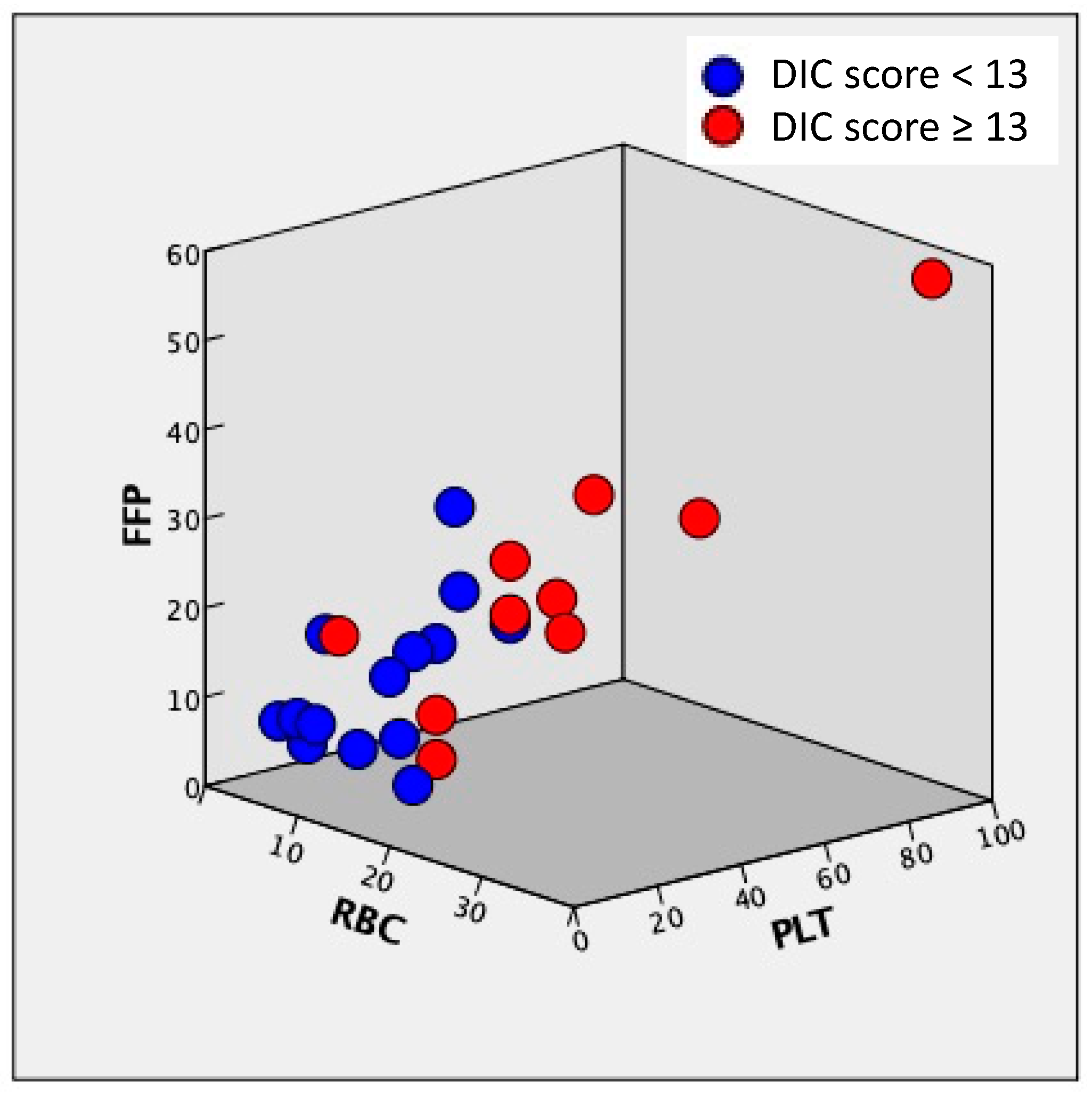 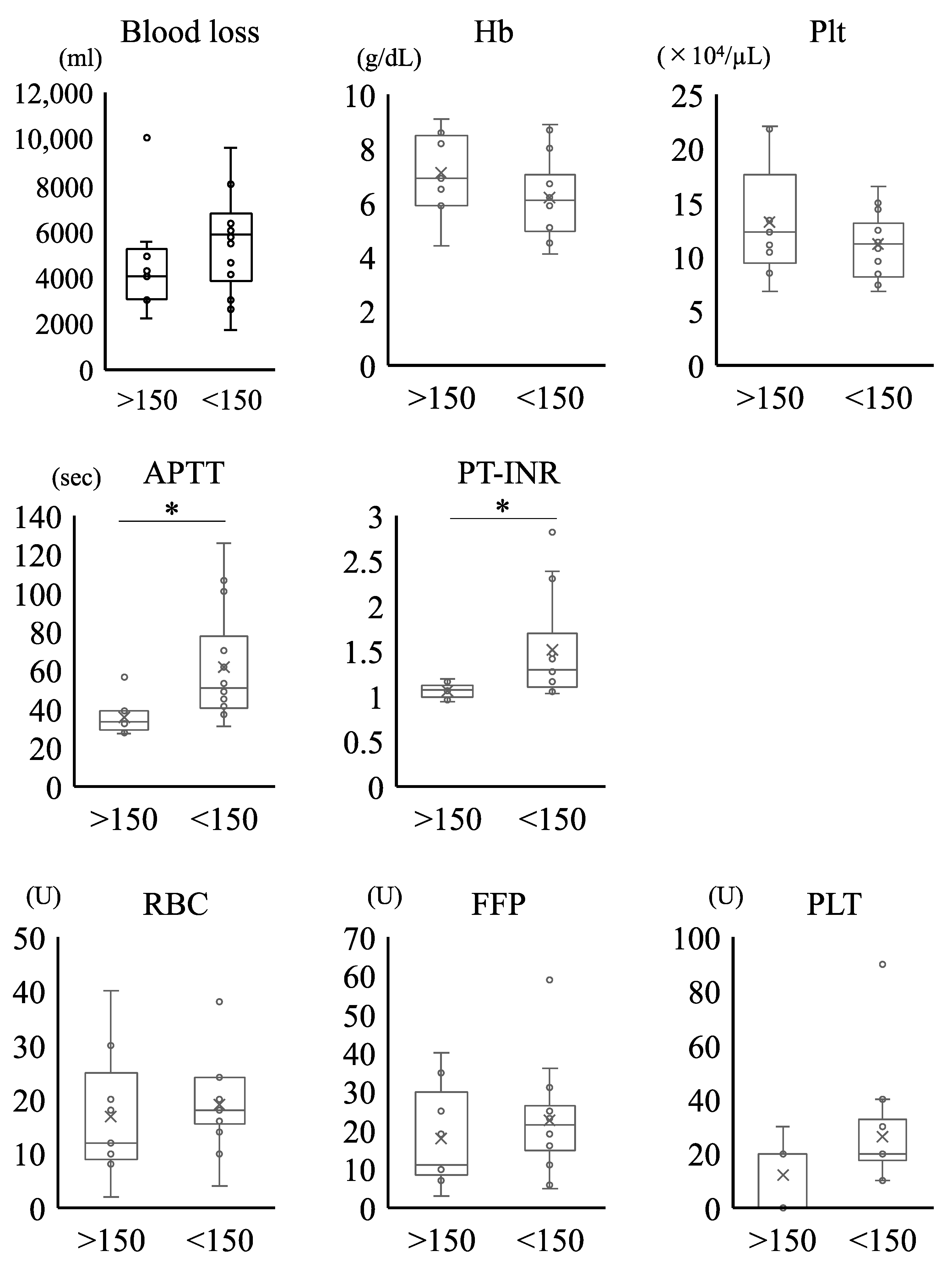